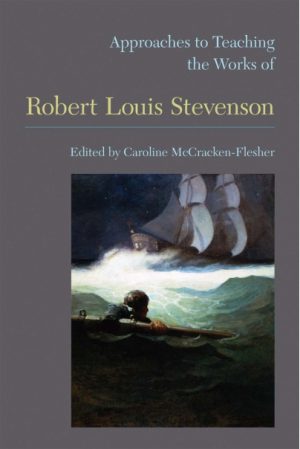 Thirty years ago, Robert Louis Stevenson was effectively excluded from the literary canon: not mentioned in standard anthologies, most of his works out of print, and books and articles on him a rarity: the RLS Website has five titles of studies for the 1950s, eight for the 1960s, twelve for the 1970s. The situation has now changed (the total for these three decades is easily passed by the thirty-one titles for the single year of 2012). Approaches to Teaching is an interesting contribution to this renewed interest in postmodernist, Mercurial, Mozartian Stevenson (to give him three of the epithets he has received over the years).

The volume (in the established MLA series ‘Approaches to Teaching World Literature’) starts with sixteen pages of introductory information by the volume editor on ‘Materials’: valuable overviews of critical reception, editions, biographies, and various informational resources. The heart of the book consists of the following thirty short essays (each about six pages long).

The coverage is admirable: Dr Jekyll and Mr Hyde is named or alluded to in four chapter titles, which is understandable, but most of Stevenson’s very varied output is also dealt with. I was pleased to see two chapters devoted to the essays, a text-type that often suffers from its marginal status in the literary system. In addition, there are interesting ideas and teaching suggestions for the Scottish romances (especially The Master of Ballantrae), The Amateur Emigrant, Treasure Island, The New Arabian Nights (the Florizel stories), A Child’s Garden of Verses, the travel writing, some of the short stories (especially ‘Thrawn Janet’, ‘The Bottle Imp’ and ‘The Isle of Voices’), and the South Seas fiction. (With so many works dealt with, it is a pity that no index of Stevenson’s works was provided, the ‘Index’ being confined to persons named only.)

However, the aim of the book is actually not to give an overview of Stevenson’s literary production, but to be a helpful book of ‘Approaches to Teaching’, and this it does well. It is probable that not all the teaching suggestions are based on actual experience, but a good number clearly are, as we see from such phrases as: ‘I like to begin class with’, ‘In teaching Stevenson’s travel writing, I find it useful to’, ‘The ultimate purpose of my course is to’, ‘Each semester I teach poems from’ etc. This gives the second half of the volume (the sections ‘Classroom Conventions and Challenges’ and ‘Course Contexts’) its helpful quality of reporting on things that have worked in the classroom.

The ideas are all for activities in which the students participate; how to give inspiring lectures – another valuable part of education – not being the sort of thing you can easily pass on, being best learnt by example and imitation.

The first part of the book, while still very alive to the teaching situation, is devoted more to interesting teaching areas and approaches: historicism (Fielding on interpretation via the historical and cultural context), ‘Transatlantic Studies’ (Oliver on the spread of myth, literature and cultural stereotypes in both directions across the Atlantic), the ‘Art of Fiction’ debate (Hames), Narratology (Caserio), Stevenson’s affinities with Modernism (Watson), his contribution to Postcolonial fiction (Tulloch and Hill), his questioning of gender roles (Wilson), Victorian Gothic (Dryden) etc.

The chapters are full of ideas and (with one exception perhaps) are reader friendly. I was struck by Katz’s suggestion to overcome facile interpretation of Dr Jekyll and Mr Hyde (good versus evil) by investigating strangeness, ambiguity and indeterminacy. The following chapter by Stiles on interpreting the text via contemporary scientific theories of psychology and evolution was also stimulating. But I found something thought-provoking in every chapter. It was interesting to see the emphasis on topography in several chapters: the early travel books blend ‘the personal with history and topography’ (Calder), Stevenson uses ‘travel and location as the foundation of plot and character development in all his texts’ (Buckton), ‘[t]opography is the pervasive reality […] [I]t is the physical impression of place and movement that matters’ (Duncan, quoting Hart). Another constellation ideas that I noted was Stevenson’s attention to phenomena and perceptions that are brief and constantly changing: interest in impressionism (immediacy and emotion) in perception and the idea of multiple and changing identity (Denisoff); the importance of contrast of light and darkness, of discontinuous and intermittent light and the way this can be taken as a metaphor of his style (Colley); the way that Stevenson offers a textual experience and reading that focusses on the surface elements of the text (Hames); the complex and changing narrator’s point-of-view in A Child’s Garden of Verses (Bloom).

At £23 the book is excellent value, not only for any teacher wanting ideas and starting points for courses, but also for anyone interested in Stevenson: the chapters cover much ground lightly, deal with most of Stevenson’s important works and are full of ideas stimulating further thought.

Approaches to Teaching the Works of Robert Louis Stevenson edited by Caroline McCracken-Flesher is published by the Modern Language Association, 2

In a perceptive essay published in 1911 Vernon Lee (Violet Paget) refers to the changes in tense in Stevenson: they are, she says, ‘dimensional movements in time, and their variety and intricacy enlarges it, as variety and movement in space enables us to feel an object as cubic’.1 This interesting observation captures an important aspect […]

Robert Louis Stevenson mischievously maintained that up in ‘the late Miss McGregor’s cottage’ at Braemar he had conceived Treasure Island simply as a ripping boys’ action yarn, with no psychology and no girls. His tale has of course turned out to be far less simple than that, and over the years writers, as well as critics, have […]

Introduction: ‘Scottish Women Writers and the Novel before 1900’

The following four essays were developed from papers that were presented by their authors in January, 2018, at the annual meeting of Modern Language Association, in New York City, on the Scottish Literature Forum panel, which I chaired during my last year of service on the Scottish executive committee. Back in 2017, when the committee […]