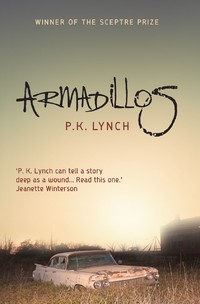 Fifteen-year-old Aggie lives on a sheep farm in the middle of Texas cattle country. The only town is four miles away: ‘One little main street with a few stores selling random stuff, one dusty antique place that I never in all my life saw open.’ But Armadillos is not a portrait of small-town life. Brought up by her elder sister and home-schooled, since Aggie reached puberty she has had a new role in the family. The book opens with a recounting of how her sister Jojo explained it:

The idea of being somehow inferior is encapsulated in the term ‘subs’, which is how Jojo describes the girls’ family. The word is a powerful dramatic hook, and the imparting of adult truths makes for a disturbing opening. Having given this little proem, Jojo leaves the bedroom and returns a moment later with ‘company’. We see the three men of the family standing over the girl on the bed. The darkness in P. K. Lynch’s debut comes mostly from suggestion, with few scenes of explicit sexual violence.

At the heart of the novel is Aggie’s relationship with Jojo, whom she loves most in the world. Jojo’s complicity in the abuse her sister suffers at the hands of their father and brothers does not go unfelt. These are complex emotions and Lynch portrays them well. Aggie wants to talk about what is happening but Jojo refuses, and after a while a silence falls between them. ‘Guess it was the silence eventually that allowed me to go’. Coming down the stairs one day, she finds the front door open. Without pausing for thought, she runs.

Aggie’s new life begins with her walking at night — hiding in ditches, fearful of distant headlights — and progresses to her hitching rides at truck stops. In her experiences on the road, the novel has a picaresque flow with elements of noir. Inwardly, however, she relives past events. The grief she feels at leaving Jojo behind manifests itself in her dreams:

The dreams kept coming. Jojo always. A desert with no rocks or plants, just bright yellow sand, stretching as far as the eye can see. Fenced in by sky, we’re like tiny figures in a giant snow globe.

When Aggie meets the streetwise and cynical Freak, the novel takes an upbeat turn. The girls are squatting with other young homeless people in a newly constructed house in an affluent area of Dallas. Aggie and Freak share the smallest of its rooms, a closeness that inspires the sharing too of their secrets. But gradually it is revealed as a one-sided attachment. Cracks in the room’s damp walls, which Aggie counts when she cannot sleep, simulate creeping doubts she has about Freak, who has become the centre of Aggie’s world:

A crack I’d been studying for weeks had spread across the ceiling and was making its way down the wall. Everything was all a dusky shade of blue apart from Freak’s pink hair and her face which, peaking out the top of her sleeping bag, looked like a little moon.

The protagonist’s voice — her Texan idiom and the sense we get of vulnerability and awkwardness — is a large part of what makes the novel so enthralling. The emotiveness of the above would be far less were it not for the pleonastic ‘everything was all’. When it comes to the passages depicting self-harm, and of the friends’ reciprocal cutting of each other’s bodies, Aggie’s voice infuses the scenes with affection, which in turn renders their distressing nature palatable, even touching:

She lowered her head and her back curled, all the knobbled parts of her spine poking out of the whitest skin I’d ever seen. I placed my left hand around her rib cage, feeling her heart beat even from there. She took a deep breath and my hands rose with her ribs. With the blade in my right, I began.

The friendship with Freak and the ‘cutting’ are central to the coming-of-age story. At the same time, life in the squat introduces a new cast of characters. Ade, the squat’s founder, hides books and papers under a sheet in his room, and Freak has unsavoury dealings with the sinister Mr Dee. The unfolding plot is interwoven with flashbacks to the sheep farm. These are vivid memories of the house and its barns, their smells, sounds and tastes. When it comes to the abuse, however, Lynch’s technique is to focus again on Aggie’s voice: it is as though, in remembering, she does not let herself think deeply enough to conjure images, and instead we get an interior monologue, a commentary, intertwined with the bible verses her father made her recite. These are harrowing passages, strengthened in their clipped syntax and half-sentences. It is an approach that parallels Eimear McBride’s in A Girl Is a Half-formed Thing, giving a primacy to voice and experience that feels particularly suited to damaged teens. Though these scenes are sparse, Aggie’s father, whom she calls Pop, lurks between the lines of every page. His domineering presence, in the way the household is organised and its chores carried out, even down to the time dinner is served, is chilling. One of the most uncomfortable scenes is his consoling a young Aggie whilst she is sick: she sits on his knee and an anxious Jojo tries her best to end a seemingly harmless show of fatherly affection.

Although Jojo behaves like her mother, there are times when the role is reversed, and we see that even as a young girl, Aggie was conscious of a certain fragility in her sister. In reminiscing about their mother, Jojo burns a scented candle that once ‘smelled of something good’ and it is Aggie’s role to reassure her sister of the candle’s lasting scent. When she has bad dreams, she protects her sister from their content: ‘She’d ask me what was wrong but I could never find it in me to tell her.’ The nightmares — which we are told were of nothing, ‘No monsters, no big bogeyman. Just dark.’ — are significant in the denouement, but also in that Aggie had, from the very beginning, a sense of there being something wrong with her family:

Fear of what, I didn’t know, but it sank inside and made like it would never leave. This was way before any of that shit started on me but I know now it was happening. Had always happened in that sub little family of mine.

Running through the novel is Aggie’s need to get to the coast; in the opening pages, we are told of the old boat her mother brought to the landlocked sheep farm, for evermore to be marooned there ‘rotting its way through every season’. There is a magical quality to her memories of playing in the old boat that provide a repose from the novel’s themes of marginality. Aggie has never seen the ocean and yet her yearning for it is tangible, in great part because she believes this is where her mother ran away to: ‘The coast: lapping waves on sandy beaches, gulls sailing on high winds, keening like discordant angels.’ The boat motif picks up momentum as the novel progresses, and when the opportunity arises for a road trip, we feel the sea’s magnetism.

Lynch handles the dual storylines well, and the climax to the road trip has a disturbing twist, but the most affecting parts of the book are its beginning and end, which take place in the family home. The neat, bookended structure proves impactful, and the emotional showdown that awaits Aggie after a year on the road is full of the drama one expects from an actor and playwright such as Lynch: her film roles include Beautiful Creatures and Trainspotting, and her second stage play, King of the Gypsies, toured nationally in 2010.

Laura Morgan writes short fiction and criticism. She is published in The Moth, Causeway/Cabhsair, and Northwords Now, and her stories have been long and short-listed for various competitions including the Bristol Short Story Prize, the Colm Tóibín Award, and the Brighton Prize. She has a place-writing blog at https://aremoteview.wordpress.com/aremoteview.wordpress.com.

Armadillos by P.K. Lynch is published by Legend Press, 2016.

‘Pain is easy; pain is something with which I am familiar’, the eponymous anti-hero of Gail Honeyman’s bestselling novel tells us. On Fridays, Eleanor Oliphant buys two bottles of vodka, takes a few big swigs and falls asleep on the sofa: ‘I drink the rest […] over the weekend, spread it throughout both days so […]