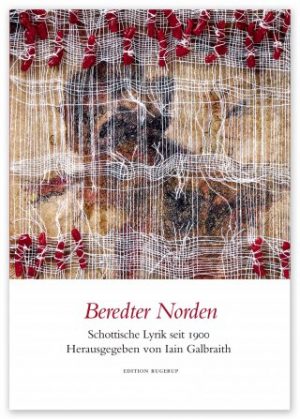 Anthologies of Scottish poetry in German are exceedingly rare: to my knowledge, there were only three such collections published from the beginning of the twentieth century to the first decade of the twenty-first.1 Against this rather scanty background, Iain Galbraith’s very substantial new anthology forms a highly welcome addition — and a very substantial one at that. On a staggeringly large canvas of 543 pages, it presents 150 poems (or, in some cases, excerpts from longer poems) by sixty-six twentieth-century Scottish poets, combining the original texts in English, Scots and Gaelic with German renderings by twenty-five different translators, complete with an extensive apparatus. The apparatus (in German only) includes a sizeable introduction by the editor, biographical information on authors and translators, explanatory notes on some of the more obscure references that appear in the poems, a glossary of Scots words, and annotated bibliographical references as a guide to further reading. Here again, Galbraith’s approach is impressively comprehensive: readers are pointed to Scots and Gaelic dictionaries; individual book publications by the poets (both in the original languages and in German translations) and translators featured in this collection; further anthologies of Scottish poetry in English, Scots, Gaelic and German; German-language newspapers and magazines that have published Scottish poetry, both occasionally and in dedicated special issues; literary histories and other secondary literature; as well as more extensive bibliographical resources to be found elsewhere.

The poems themselves are arranged in a roughly chronological order and represent a broad, well-selected cross-section of modern Scottish poetry. The collection includes not only highly influential, canonical poets and texts, but also various voices and works which may be less familiar to non-specialist readers. There is also a wide range of themes and poetic forms. The anthology’s emphasis on linguistic, formal and regional plurality is further reflected in the German translations: some are very close to the originals, others are free recreations that can even go as far as changing the setting of a poem from Orkney to Austria. What is particularly interesting is the use of different varieties of German: High German, regional varieties, and even a synthetic variety, ‘Rheinskotisch’, which has some intriguing parallels with Lallans.

The volume is also very beautifully produced, with an attractive cover and high-quality paper. It will make appealing reading and a useful resource for both academic and general readers. With its interesting, wide-ranging selection of texts and its helpful appendices, this anthology is brilliantly suited to introducing German readers to Scottish poetry, where an introduction is still necessary. Even those already familiar with the field are bound to make many new and delightful discoveries. The collection might also appeal to native speakers of English, Scots and Gaelic who would not need the translations but have a working knowledge of German and an interest in translation.