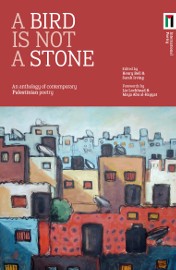 After first reading through the poems in this remarkable and unique anthology, I was reminded of lines of Emily Dickinson’s: ‘After great pain, a formal feeling comes –/The Nerves sit ceremonious, like Tombs —/ The stiff Heart questions was it He, that bore, /And Yesterday, or Centuries before?’ Dickinson has other lines: ‘The Soul has Bandaged moments –/ When too appalled to stir –/ She feels some ghastly Fright come up / And stop to look at her –’. But in the same sequence we find: ‘The Soul has moments of Escape –/ When bursting all the doors / She dances like a Bomb, abroad, /And swings upon the Hours’ […]

Such various conditions are expressed in the poems in this anthology written in or of a country which for over fifty years has been deleted (what John Berger calls ‘landswept’) in one way or another. And this deletion continues with loved ones being killed and suffering, and homes being destroyed, while the struggle to maintain a vestige of hope seems unending – but ‘our song sings on’ as Salim Al-Nafar ends his poem ‘Drawing Class’.

What is it to be a Palestinian poet? In the poem entitled ‘The Poet’ by Omar Shabanah, and translated by Henry Bell, we have something of an answer perhaps. Running to thirteen pages it sits in the middle of the book like a testimony, where the poet as person is identified with the people, with the country itself. Tracing beginnings and continuings, ‘scraps of memory, / and a shining darkness filled with martyrs’ he is ‘misled and mislaid’. He ranges over literature and history, in various cultures, empathising with ‘peoples like the Iroquois /who were destroyed’. He looks to eternity and sees himself as a sign of hope: ‘the bird that will see / the end of the flood/ and come carrying the branch of liberation / Here.’

As the title of the anthology might indicate – which refers apparently to a sculpture by the late George Wyllie – we find many birds in Shabanah’s poems, as in dozens of others in this anthology. We have birds as omens and warnings, even as persecutors (‘it hollowed out my skull’ or ‘it howks oot my heid’) and as the message-bearers that they have been configured throughout history. Indeed we have ‘birds of every kind’ who ‘will take you under their wings’ in Murad al-Sudani’s poem ‘Childhood’ (trsl. Henry King). ‘Dusk’ by Abdel Rahim al-Sheikh sustains the bird metaphor throughout but ‘his feints and flits are far from tender’. Translated by Harry Giles in many more lines than the original, it is an example of the way so much is packed into few words in the Arabic, and which becomes more extenuated in the English or Scots or Shetlandic. The Gaelic is probably nearer in idiom, viz. Aonghas Macneacail’s ‘martair’. Alasdair Gray manages to keep this idiom in nine tight lines in the poem ‘Not Only Rivers’ by Tareq al-Karmy. But many of the poems are ‘bursting like a Bomb, abroad’, and should be allowed to do so, such as Uthman Hussein’s ‘Camp Block 5’ (trsl. Henry King), and Mohammad Hilmi al-Reesha’s ‘An excerpt from the Ambushes’ (trsl. Juana Adcock.)

Apart from birds, another word seeping through these poems is ‘blood’. Blood always makes itself seen and felt, and in a poem it draws attention to itself. Sometimes it is benevolent, as a sign of life and warmth. Or it is a case of something being ‘in the blood’. But mostly it is evidence of violence and death: ‘they say the wild birds/ ferried his blood to his family, drop by drop;’ (‘Martyr’, by Zuhair Abu-Shaib, trsl. John Glenday). Even ink is interchangeable with blood, suggesting the poems are themselves written in blood, and ‘nothing resembles the woman of ink and blood so much as a country/ […] mirrored in a mockery of steadfastness / while we are dying (‘Woman of Forgetfulness’ by Bisan Abu Khaled, trsl. Amal El-Mohtar). And ‘The Enemy’ are depicted as ‘drinkers of blood’ (Yousef al-Mahmoud, trsl. D. M. Black).

Among the twenty-five poets translated in this volume, there are four women. Among the thirty or so translators, there are some fourteen women; and it is women who translate the women. The Forewords by Maya Abu Al-Hayat and Liz Lochhead give us the setting. Al-Hayat’s poem ‘Children’ is vividly translated by Lochhead (and by Graham Fulton), with touching detail in Lochhead’s the ‘wee eyebrow’, for instance; and she also describes the removing of ‘a tuggy bit, a tangle’ from a child’s hair in Al-Hayat’s ‘Lament for the Mothers’ Loss of Desire’. This poem is also translated into Shetlandic by Christine De Luca, with ‘hair bizzie-wippit’. The idea of having a poem translated by more than one poet into more than one language is itself of cultural importance, allowing the Scots, the Gaelic and the Shetlandic to share in this international poetic dialogue.

It is poignant and grimly amusing to read of the Western tourists who ‘sip at their longing for God’ in Manger Square and ignore ‘an old man stretched out on the pavement’ (‘Lamentation’ by Samih Mohsen, trsl. Henry King). It is hard not to feel something of a tourist oneself when reading a book of poems like this written, as it were, from Emily Dickinson’s ‘great pain’. As Iain Crichton Smith wrote in his long essay about the Hebrides: ‘Real people in a real place’; the Palestinians are also real people in a real place. And the land itself which is the subject at the heart of most of these poems, guarding the bones of their relatives and ancestors, is sacred to them.

All praise must be given to Sarah Irving and Henry Bell for carrying through this project, to the painstakingly hard work of the ‘bridge translators’, to the Palestinian poets, and to the translators who have succeeded in putting themselves into the mind’s eye of the poets.

A Bird is Not a Stone: An Anthology of Contemporary Palestinian Poetry edited by Henry Bell and Sarah Irving is published by Freight Books, 2014.

Towards a Post-Colonial Alliance? Some Perspectives on Franco-Scots Poetry Translation

I would like to thank The Bottle Imp for inviting me to reflect on my work as a translator of both French and Scots. In this article — the first I have written on this topic — I outline a few ideas regarding the normative tendency of Franco-Scots interactions and the way to escape it. […]