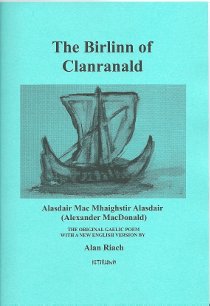 These are words as powerful for the oarsman as ‘On your marks, get set, go’ for the runner or ‘Load, aim, fire’ for the soldier. No doubt there are many other such triads. These things have a special force of their own, all to do with testing the limits of human strength, resolve and endurance.

The words ‘Stretch, pull and bend’ stand out with tremendous memorability from the Gaelic poem ‘Birlinn Chlann Raghnaill’ (‘Clanranald’s Galley’) by Alastair mac Mhaighstir Alastair (Alexander MacDonald), who lived from the 1690s to about 1770. In the original they are Sìnibh, tàirrnibh is lùbaibh.

I have been entranced by that six-hundred-line poem all my adult life. I was introduced to it as a student by the late Derick Thomson, a poet himself. He made one of the nine English-language versions listed by Alan Riach in The Birlinn of Clanranald. Another was by Hugh MacDiarmid, guided by Sorley MacLean. But now, in this booklet, Riach has created for us a new version that transcends all others.

It does not pretend to be a translation, exactly. But it is one answer, and a very good one, to a question posed in his introduction: ‘How to translate it?’

The first part of Riach’s solution is to retain the overall dramatic structure of the poem. Alastair organised it into sixteen sections, which we may characterise as the blessing of the ship, the blessing of the weapons, the incitement to row to the sailing place, the rowing-song, the rowing, the helmsman, the tackle-man, the sheet-man, the tack-man, the lookout, the halyard-man, the teller of the seas, the baler, the backstay-men, the backup men and the voyage. Riach keeps all these, and sectionalises the voyage as well: the storm rising, the response, the storm, the eye of the storm, the damage, the aftermath, rowing again, safe harbour.

Within this overall structure, Riach embellishes and improvises. It is always possible to identify the specific words of Alastair’s which have inspired Riach’s, but they are a mere starting-point. The original is taut, sparse, controlled; Riach’s is a more baroque sort of masterpiece. For example, four lines which, literally translated, mean:

The blue-black sea turned into big mouths
Wide and foaming,
Locked into spewing at each other
In fatal strife

Sea opens its mouth, is all mouth, all agape,
widening, opening, sharpened the teeth, all
crocodile-strong, hippopotamus tusks, and gripping and turning,
as if wrestling was fun, forcing over each one —
Sky shrinks and clenches long ribs on its brow —
It has turned to ferocity now —
The fight to the death has begun.

So is this a different poem? Yes and no. Is it Macphersonisation? No. It’s in the spirit of the original, it tells the same story (few stories lose in the telling), the proportion of rhyme is about the same, and it plays no more brashly or innovatively to its twenty-first-century audience than did the original to its eighteenth-century one. It is a splendid achievement. But it is instructive that the best lines of all have no grounding in the original:

The sea was our friend,
gave us peace, in the end.
We, through its vicious aggression,
murderous violence, angry oppression,
came as we needed, by our ability,
despite its directed and focused hostility.

Like those triads of ours, the book consists mainly of three parts: introduction, the new poem, the Gaelic original. I would like to make one or two comments on the introduction. Firstly, Riach sees the term ‘birlinn’ as a throwback to the middle ages, but in Alastair’s day it was in common use in the Highlands in both Gaelic and English. He is right however to see the poem as ‘referring’ to a medieval world. Several sections arise directly from pre-existing models: pondering them set Alastair’s imagination free, just as pondering the result has set Alan Riach’s free. Thirdly, the journey begins in South Uist and ends — more abruptly than Riach is willing to permit — at Carrickfergus in Belfast Lough. ‘No explanation for this voyage is given’, says Riach, which is true. But Carrickfergus has historic significance as the last place in Britain or Ireland to be held by the French in the Stuart interest — in 1759 — and, yes, the poem could have been made as late as that.

Lastly, Riach describes the final third as ‘astonishing, terrifying, exhilarating’, but it is substantially prefigured in Gaelic voyage literature well known to Alastair, as can be proven. What is more truly original, and to me more astonishing, is the middle third, which depicts the detail, dignity and heroism of labour.

How many Scottish poets have done that? Why is it not better celebrated? If there is a collection of such poems, I would like to know of it. Stretch, pull and bend …