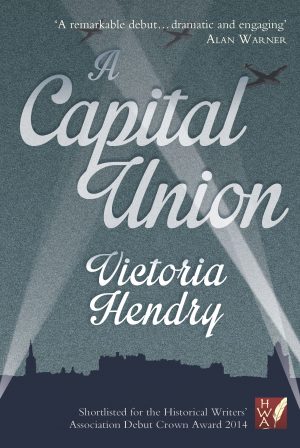 A Capital Union is an interesting and extremely ambitious first novel. In fact, this reviewer should say at the start that it is an over-ambitious novel; it tries to do too many things, and they do not always work together. If I start with this, I should also say that I enjoyed reading it, and was always curious about the narrative to come.

The novel consists mainly of an account of a marriage during the Second World War in Edinburgh. The pair seem ill-matched from the start. She is a teenage farmer’s daughter from Ayrshire who suggests in the first paragraph that she accepted Jeff’s proposal out of irritation with her mother. This is a minor strand of the book, but it is the first indication that Agnes by no means always says what she means, or is going to say what she really thinks. She is an unreliable narrator in a novel where on the whole relationships don’t work. Jeff is a university lecturer in Language, a Scottish Nationalist, an enthusiast about the Scots language, who falls in love with what is clearly a pretty face allied to a good traditional Ayrshire tongue. They share only one component of marriage, and it does not involve communication or shared interests.

She is bored rigid by his interests in ‘whatever he did at work.’ (He is to carry on a Scots Language dictionary which is stuck at ‘C’.) She pays little attention to the war – ‘I never really paid much mind to the things he read out of The Scotsman‘, and she is bored stiff by his major preoccupation, the SNP and its attitude to the war. She is attracted, however, to Douglas Grant, his more lively and conspicuous friend. This man is based on Douglas Young, a big man in every way, classicist, poet and university teacher, who led the SNP 1942-5.

Here the book changes track to follow Young’s refusal to accept conscription from any but a Scots government, and his subsequent imprisonment at Saughton. Historical archives have been used by permission to illustrate Young’s position and principle; but Jeff’s following his friend’s example and risking prison may well be due to a craven fear of battle rather than principle – faced later with offered violence from a clearly sick man, he is in tears in no time.

But this is never made clear, because the narrator never offers clear guidance, any more than she is specific about how far she is in love with Douglas Grant, who is not apparently really interested in her, or whether and when she is in love with the Austrian soldier she is landed with to care for. As to the whether and when, she is coy, and I had trouble pinning them down on a careful second reading.

Agnes doesn’t work as a narrator, and she does not come together. She does not write in her native Scots, except for the odd well known phrase: in contrast, Jeff is allowed some grotesque academic ponderousness:

I am a mere foot soldier in the fight against the totalitarianism of the English language and its bureaucracy … Its ideology spreads like tentacles through our native consciousness, suffocating the innate philosophy enshrined in our very speech, a democratic, socialist consciousness that is itself the enemy of fascism.

Throughout, he is cold and slighting to his wife, and we accept the tidiness with relief when he dies in prison of smallpox; it saves the inevitable divorce and final break in the marriage.

Agnes is best on her daily wartime life in a Morningside tenement. She tries to grow potatoes in the back yard, goes walking up on Blackford hill whenever she can, and successfully snares rabbits there, lives a tiny, circumscribed life in the flat still somehow inhabited by the spirit of Jeff’s dead mother. She cooks sad wartime soups and is generally unaware how lonely she is. But the picture is often spotty: she can be high-flown, and that doesn’t work. We have a meditation on all she has lost towards the end:

She, Scotland, had stolen my family … a hag of petrified rock. Scotland ate her own children on winter nights as they dreamed, but each new generation still loved her. She was an unkind parent, a deceiver, a monster; she was a lover, an enchantress, a dream. Victoria Hendry clearly has talent and determination. But too much ambition. She tries to go too far, too fast. I look forward to reading her next works.

A Capital Union by Victoria Hendry is published by Saraband, 2013.