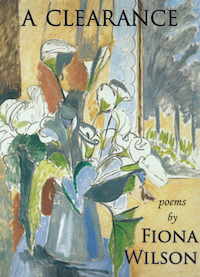 If the book’s title and author’s name suggest a connection with Scotland this is entirely appropriate — Wilson grew up in Scotland and from the very first poem (‘Victorian Scotland’), a sense of Scottishness pervades her debut collection. The Scots Magazine, the Caledonian forest, Burns, Stevenson, Trocchi and Troon are all referenced. This is not to suggest A Clearance is parochial — it is stylistically and thematically wide-ranging and is published by a New York publisher; the author currently teaches at Sarah Lawrence College.

And what a fine debut it is. Wilson’s work is intense yet expansive, particular but not overly self-involved. There’s plenty room for humour, too. Wilson delights in teasing multiple meanings from words in a manner that is fitting and controlled; she seldom goes for the cheap pun.

Some of the apparently autobiographical poems have a winning self-deprecation — the narrator, kept indoors by ‘heavy drapes / of rain’ is forced to wait ‘in my tee / and dungarees, pudding-bowl haircut’, and a few poems later is ‘Thirteen, average, and awkward’.

Furthermore, the poems have a largeness of spirit and an inventiveness that goes beyond introspection. ‘Evidence Respecting the Existence of a Mermaid — from the deposition of John McIsaac, Campbeltown, 1811’ is playful but thought-provoking. ‘The Peroxide in Annie Lennox’s Hair’ makes an imaginative leap of association:

No matter how she cut it,
she simply couldn’t keep
the roots from showing through:
rain against rain, the depth
of summer in the Lairig Ghru.

Similarly, Wilson herself can’t help her Caledonian roots from showing through. For her readers, she provides brief end notes on certain allusions, Scottish or otherwise, and defines the Scots words that pepper her deft, linguistically rich writing. In ‘This’ll Do Me’, she makes mention of ‘an hermaphroditic Victorian poet’, and adds a note which reads: ‘William Sharp aka Fiona Macleod (1855-1905). Not really, though Yeats liked him more as a woman.’

Perhaps it was a day like this — tired trees,
mizzle in twenty different shades of grey,
and mist, nothing if not general — that she,
a right wonder, sashayed in on the tide,
‘a genius’, as bold and sonsy as you please.

That accessible, inventive and musical blend of registers puts me in mind of Simon Armitage — but Fiona Wilson is her own writer. The prose-poem ‘Water Under the Bridge’ is tight, vivid and powerful:

At twenty I’m living in a cold-water flat off Byres Road with a boyfriend who’s wasting my time. We drink in Tennants and The Wintergreen. I type his manuscripts, listen to his nonstop palaver about the wonders of Charles Bukowski. It’s the eighties. Chickweed sprouts in the shipyards. The Clyde, yon ‘murmuring stream’, is thick with detritus. Is romance the only alternative? If so, I’m in a sorry state.

The way Wilson sees through, and cuts through, that relationship is the way she reveals stereotypical relationships with Scotland for what they are. ‘A Proper Charlie’ invites us to witness a ‘cartoon Celt in that West End bar’ and see that he is ‘the last of the great pretenders’.

Wilson negotiates a fine balance between humour and seriousness. That is to say, she uses humour for a serious purpose. ‘Dialectical’ allows us to eavesdrop on a conversation, and on one of the conversant’s thoughts:

with me?’ Good question,
as always. My turn. ‘Which picket line?‘
If it’s not one thing, it’s another.

The lines of ‘Broch’ are arranged to shape the poem into just such a ‘hilltop quasi-beehive’. The poem is not simply about a broch, though, it is about communication and defensiveness. I think one of the aspects of A Clearance I enjoyed most was the thrilling and original manner in which Wilson’s mercurial mind interprets diverse places, objects and events, finding correspondences that encourage us to view the world in a new and startling light.

These are beguiling poems which are likely to make the reader smile or nod in understanding and admiration. Familiar and disorientating, melancholy and joyful, consoling and surprising, this is an energetic and above all a thoroughly enjoyable debut.

A Clearance by Fiona Wilson is published by Sheep Meadow Press, 2015.

Portable Rootedness and Other Contradictions: Some Thoughts on Contemporary Hebridean Poetry

In this informal, inexhaustive essay I shall reflect on continuing challenges and recent developments in Hebridean poetry, concentrating especially on the six years that have elapsed since the publication of These Islands, We Sing: An Anthology of Scottish Islands Poetry. As I wrote in my introduction to that book: Poetry is grossly undervalued today, and even […]