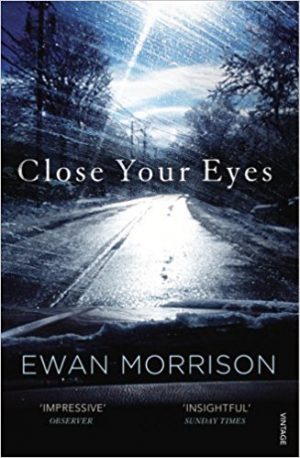 Ewan Morrison departed from the traditional novel to great effect with 2012’s Tales from The Mall, a hugely informative and entertaining read, but with Close Your Eyes he reminds us that he can tell a story with as much skill, wit and technique as any writer around today. His mastery of narrative, voice, place and structure results in the reader always being involved in events, and once more he manages to keep us on the side of people whose actions rarely warrant it.

The central character in Close Your Eyes is Rowan, who is suffering from post-natal depression following the birth of her daughter Sasa. She has a fear of parenthood and has come to despise her partner, mainly for his understanding which she finds infuriating despite knowing this is not only unfair, but irrational. She cannot stand the company of her fellow new mums, having to work hard not to break down in front of them and has turned to Self Help books for succour, but they only cause her more despair as she fails to live up to the ideals of their mantras which she knows are not only unrealistic for her, but are for most people as individuals’ lives cannot be reduced to such clichés or well meaning haikus.

She comes to the impulsive conclusion that she cannot get on with her life unless she faces up to her own upbringing. Morrison takes Philip Larkin’s famous lines (although I suppose Sophocles got there first) ‘They fuck you up, your mum and dad, They may not mean to, but they do’ and expands on them as only he can, to comment on the cultural and social pressures applied to modern parenthood, but also the New Age dream of the hippie ideal which came from the 1960’s counter culture movement. He asks us to question the notions of free love, personal journeys, and an alternative lifestyle and posits the idea that at their heart, or at least in practical terms, these are some of the most selfish, and potentially destructive, ideals of recent times.

Rowan makes a pilgrimage back to the community of Ithaca, in the north of Scotland, where she was raised by her now missing mother, and by the other residents who formed the community as an escape from the modern world. She feels she has to confront what went on there before she can move on with her life, and has to discover the truth about her mother. The fact that she abandons her family to find out why she was abandoned by her family is exactly the sort of contradiction which you would expect of Morrison.

We are constantly told that modern life is rubbish. Modern life may indeed be rubbish, but supposed alternative lifestyles have become just as much a part of modern life as any other subculture. This is clear in the way that Ithaca has changed from a hippie commune to become a ‘spiritual retreat’, which welcomes visitors from all over the world, for a fee. The parade of characters who Rowan encounters is memorable, but they never become the grotesques that they threaten to be. Morrison is too good a writer to make it easy for the reader to pass judgement, and even Rowan’s cynicism and anger begins to melt as she remembers good times as well as bad, and comes to understand that while the reality may have been destructive, the dream was perhaps an admirable one.

While it’s not uncommon in recent times for writers and commentators to reassess New Age spirituality and find it wanting, not many have done so in such a personal, complex and artistic manner as in Close Your Eyes. It’s as much a commentary of contemporary culture as a critique on the past. It’s difficult to think of another writer who tilts against cultural windmills as Morrison does. He not only wants to challenge accepted social norms and standards, he delights in it. I would describe him as a contrarian, except I believe he fully stands by whatever his position is on a subject, and he usually has the facts at his finger tips to back it up. This is not a writer being deliberately provocative; he means it, man.

There is bravery to Morrison’s work which verges on the devil-may-care at times, and that makes him one of the most exciting and unpredictable writers at work today. Previous novels such as Swung and Ménage, have dealt with sex with a gritty honesty which some people found disturbing and I have no doubt that there are those who will loathe Close Your Eyes as it makes us question aspects of life, particularly to do with the family, which our society holds most sacred, and I suspect Ewan Morrison wouldn’t want it any other way.

Close Your Eyes by Ewan Morrison is published by Vintage, 2013.