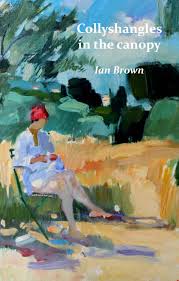 Collyshangles in the Canopy is Ian Brown’s collected poetry. Brown is no slouch: a theatre-maker, critic and pedagogue who has contributed greatly to the renaissance of theatre both from and beyond his native Scotland. It is impressive that, among his various literary outputs and professional engagements, he has found the time to create a solid, sizeable collection of poetry.

In fact, Collyshangles neatly proves this by including, alongside sections of poems arranged by theme, excerpts from stage plays: a Scots version of the choruses and laments from a translation of Antigone and songs from his 1973 play Carnegie. Both serve as interesting reminders of how verse in plays can function to infuse the overall presentation with a deeper, often more abstract emotional insight into action. Carnegie, somewhat rarely for printed song lyrics, works very well outside of its musical context. Its lines are stacked with a Kipling-esque ethos in metre and rhyme. One is left curious to hear how they might be sung.

In Antigone, Brown uses Scots to communicate the despair of powerlessness. It’s a lovely and apposite mode for Sophocles’ barren imagery, especially in lines like these:

Brown chooses not to go into sensuous Lallans territory with the Scots. The language is present enough to subtly and deliberately estrange without utilising the aural power of our Leid. However, lines such as ‘Strange things happen when darkness comes ower the earth’ contain missed chances for interesting substitutions. Though formally communicative of atmosphere and the dramatic liminality of the original play, the choice to use a sparse Scots translates to a loss of impact, and so jars with the sections like the one quoted above, which uses the Scots word ‘fund’ to hinge its meaning in a more satisfying fashion. This is a problem only shared by some of the Scots poems in the collection.

Antigone and Carnegie are, curiously for earlier works, shunted to the back of Collyshangles. Though one can see the appeal of presenting a wide body of work by theme, the poems are undated, and so the reader is not privy to the information about what point in the writer’s life they were written. Which is all very well for Barthesian types, but in practice does not allow us to trace the writer’s engagement with said themes over time — an interesting readerly exercise that most collected works happily facilitate.

Alan Riach’s introduction directs us differently. ‘This book begins and is made of gifts’. Well, the rejoinder goes, no it isn’t. At least not if you pay for it. It’s a pedantic point, hard to resist: Riach is mainly correct. As a gift is given on a certain occasion, so these poems are occasional, sparked largely by encounters with people, locations, cultures. Many relate to specific places, from famous capitals to obscure towns on the Polish-Czech border. Many of these places are Scottish. Arguably travel, both internal and external, is the locus which creates Brown’s strongest work. The gorgeous ‘Fife harbour’ sees ‘the survival of harled and pantiled wonder’ in a landscape of harbours no longer visited by touring theatre companies. ‘Calcutta/Kolkata, January 2012’ gives us a simple yet poignant snapshot of an empire ‘colonised, / resumed, absorbed, retrieved by couples / Walking hand-in-hand in their India’.

From these encounters with place comes a concurrent tendency from Brown to educate his readership about history, culture and meaning. There is much to be learned from this volume: for instance, one poem rather neatly takes the structure of a calendar, explaining the months in English and Dakota languages. ‘Not about heroes’ is a fine example of a war dedication; though its ground is not fresh, it is inevitable that we shall walk it again. In this poem Brown cannot resist the urge to educate, even going so far as to identify Craiglockhart as a former ‘Hydropathic Institution, made Military Hospital’. The gift here is a simple fact, and a detail ironically reminiscent of the Dardanelles. On first, even second reading, it is the fact that strikes us more than the irony.

This realisation, I believe, takes us to the heart of why, when reading this pleasurable, educative and diverse collection, one might not often stop to draw breath after taking in each poem, or more frequently enjoys that repose of thought that comes from being challenged through verse. Here are four indicative endings:

All explanatory observations. Instead of closing a loop which forces the reader back into the poem to encounter its language, they explain the wider import of the content. Poetry is allowed do this — but if it becomes a tendency in a collection, then the experience of reading that collection becomes less fun.

Ultimately, reading Collyshangles is like arriving to work as a cleaner at a massive, ornate mansion house, and finding that it has already been scrupulously cleaned by the owner. We feel we are in a beautiful environment where we can learn, listen and not live in fear that brushing the wrong cobblestone or lifting the right book will reveal a secret passage. We frequently feel happy and safe to be there, but nonetheless the work we wish to do, the work that we are here to do, has already been done. Or even half-done. The gift is a multi-faceted and beautiful one, and only an ungrateful child could fail to appreciate both the present and the giver. By the same token, only a daft child could receive this and not — perhaps selfishly — look forward to more gifts from the same venerated relative, perhaps next Christmas.

Collyshangles in the Canopy by Ian Brown is published by Kennedy and Boyd, 2015.

William Letford’s second collection is a warm-hearted bundle, mainly containing poems of less than a page. Most have simple, fortress-like titles. There is something to interpret here, between the monosyllabic title Dirt, and the stark nomenclature of its contents: ‘Marriage’, ‘Temple’, ‘The bevy’, ‘A garden’. We are presented with a sample of dirt, made of […]