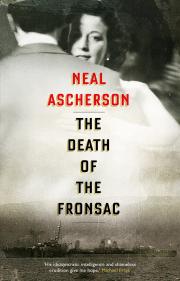 Let me confess from the start: I am parti pris. I would like this novel. I have lived almost half my adult life in Poland. I am Scottish. I greatly admire Neal Ascherson’s work as a journalist, historian and travel writer. Indeed, I have long been envious of the dense webs of stories and detail that his articles and books contain. His Black Sea (1997), for example, is extraordinary and wonderful in its mixing of personal experience, historical anecdote, and scientific account, and in its broad understanding of the forces of climate, geography, economics, and culture. Material for more than a few novels lies within it. Ascherson is a writer who knows the world, writes beautifully, and moves easily between Scotland and Poland, Germany and the Black Sea, and can range even further afield in his journalism if he wants to (Marseilles to Malaya, in my reading). So, yes, I would like this novel. And in fact, I do – very much. The Death of the Fronsac is an absorbing, intelligent, rich novel, one that does some difficult and worthwhile things very well.

The Fronsac in question is a French destroyer in harbour in Greenock, which explodes and sinks, with some of its crew trapped aboard, one morning in 1940 shortly before the German invasion of France. The cause of the disaster is not clear, but sabotage is suspected. This event shapes the lives of the group of characters that are central to the novel – the Melville family, that is Mrs Melville, her daughter-in-law Helen, her son Johnstone, their daughter Jackie, and their lodger Major Maurycy Szczucki, a Free Pole, who has escaped to France after the September 1939 campaign, and who has been sent to liaise with the French Navy in Greenock. But the explosion (accident or sabotage?) is also the pivot of events for a large cast of other characters, including Scottish civilians, an English (really German-Jewish) intelligence officer, French naval personnel, and sundry Polish soldiers and emigrés and emigrées of various ranks and provenances. Most of the novel is told by Szczucki, but other characters are vitally present throughout its story. I must not reveal here the complicated twists and turns of events over the next fifty or so years, but that element of the novel keeps the reader intrigued and in suspense throughout the novel. Suffice it to say that there is a solution to the mystery of the Fronsac and that our central characters not only play their parts in that mystery, but also in its solution (although only they know the whole truth in the end).

The sheer richness of Ascherson’s novel is striking. It attempts to do a lot, and manages to do that very well. The richness is apparent on many levels. It is a historical novel that concentrates on the years 1940 to 1945, but ranges forward into more recent times, the Polish October of 1956, for example. Its historical locales reek authenticity. It is a novel about war, the complex loyalties and dilemmas that it involves, the miscomprehensions and insights it is surrounded by, the freedoms and terrible demands it brings, its accidents and chance encounters, its wretched wasteful horrors. It is a psychological novel about Jackie’s growing up in the shadow of lies and absences, and of her winning through to worth and insight. It is also centrally about Szczucki’s experiences as a refugee, as a soldier, as a human being placed in complex personal, social, and historical circumstances. Here Ascherson offers a fine and nuanced picture of someone from that pre-1939 generation, someone who fights the Nazis for six years, experiencing at first hand all the ambiguities of the British attitude towards their Polish allies, all the tensions of his own sense of a multi-facetted Poland (he really does not like some of his compatriots, and they reciprocate), all the appalling losses of the killing fields of Europe, and someone who lives on into a post-war world in which his country has been sold to the Soviets by the Allies, and in which he must make intricate and painful accommodations with changing times and agendas. The novel, too – and part of its interest lies in this – is a good thriller, one in which there is intrigue, betrayal, manipulation, horror, decency and obtuseness in abundance.

The novel has a grand array of settings, which you might expect in a novel about a world war and its aftermath. There is a lovingly recreated Greenock and other parts of Scotland (Szczucki, probably rightly, records the miserable weather above all), Poland before and after 1939 (done with subtlety and accuracy), Canada (in Helen’s accounts of it), Soviet Central Asia, Persia, France, and the Netherlands. The range of time settings is also considerable. The focus is on the years 1940 to 1945, but the novel ranges back to pre-War Volhynia, and forward into the Polish Recovered Territories in the 1940s, Warsaw in 1956, France in the 1980s, and then briefly into post-1989 Poland. There is an appropriate panoply of characters: Poles of all sorts, Scots from common folk (families displaced by bombing, drinkers in bars) to aristocrats to communists, Free French and Vichy French, and a secondary cast of English officers, soldiers, and spies. There is even a small group of rather nasty SS prisoners. The languages, too, in the novel are many: Polish (almost entirely accurate, I believe), Scots (very well done), standard English, and French. The whole jostling, diverse world of 1940s Scotland is there in a microcosm. This world is reflected in how the novel is narrated. The story is supposed to be Szczucki’s account of events, and in most of the novel he tells the story in the first person. But at times, he has to change to Jackie’s point of view, and at times tell of events that neither he nor Jackie experience directly. At another point, Szczucki tells Wisia’s tale of exile, imprisonment, and escape, partly in his words, partly in hers. The amplitude and intensity of events are beyond one point of view.

For a novel about war and set in a time of war, actual fighting takes up a surprisingly small part of the novel. Moments of violence are embedded in periods of waiting, meeting people, worrying, planning, travelling, falling in love, working out what to do in life, having accidents that shape your fate (Szczucki, through no fault of his own, keeps missing out on grand events, apart from the explosion on the Fronsac). Indeed, the novel – besides its focus on war, action and history – is a moving consideration of what we mean by home (which Szczucki for obvious reasons is constantly reflecting on) and on the chances, necessity, and cost of escaping from that home. Szczucki and Helen, and so many others are displaced by the War. This entails costs and pain, but also brings possibilities of self-recreation. Helen becomes someone different and gets to do exciting things by running off to Canada. Szczucki must constantly recreate himself in new situations. Loss and chance shape the lives of the characters in the novel, both the likeable and the distinctly unlikeable (Johnstone Melville, the collaborationist Guennec). Little survives, buttons, an earring, memories. Pre-War Poland and the Royal Navy pass into history. Senior Polish officers, who performed great and brave things during the War, end up working in bars in Edinburgh. A lover dies. The admirable Captain le Gallois says it best in his office in Greenock overlooking the port:

We grow up, we count up our little choices, we learn how to move safely between who we think we are and what we think we want. But then the wind comes from the sea, and we are blown into the night, like little birds, like leaves. A revolution, a “fucking war,” a deportation which drives a million families from their homes. A time when good girls who said their prayers starve in Asian deserts, when a ship you trust torpedoes herself and locks you in to burn or drown. The wind comes … and before the lights go out you see your mountains crumbling, your changeless landscape tattering into flying pieces of paper. Just stage scenery! And when light returns, you are lying naked on the beach of an unknown continent. Soon people will come and shout at you in a language you don’t know, put you in an itchy foreign uniform, give you a mug of tea – ugh!

This novel is as wise as it is rich. It is an absorbing, complex and humane piece of fiction about terrible times and how good and bad people make the best they can of them.

The Death of the Fronsac by Neal Ascherson is published by Head of Zeus, 2017.