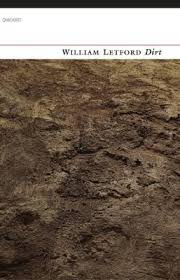 William Letford’s second collection is a warm-hearted bundle, mainly containing poems of less than a page. Most have simple, fortress-like titles. There is something to interpret here, between the monosyllabic title Dirt, and the stark nomenclature of its contents: ‘Marriage’, ‘Temple’, ‘The bevy’, ‘A garden’. We are presented with a sample of dirt, made of constituent pieces as varying as the separate minerals which comprise soil. In this collection, the act of losing upward-reaching sublimity isn’t hard to master, and the art is located only through the sinking.

The collection’s introductory poem (it’s beyond an epigram in fact, more a hypothesis, map or mission statement) begins with these lines: ‘Temples and monuments reach for / transcendence, beauty lies in the / carcass of an insect’: ‘take your eyes from the heavens / look long and deep’. Simple, contrasting metaphors with space to breathe, and the instruction to consider what is directly in front of us. If the reader is like a traveller, this poem feels a bit like stepping off a plane into a hot country, but with one difference. It’s healthy, exciting, real, and not exotic.

Not exotic can also be a strength. Some of Letford’s poems are set in India, and comprise an emotional travelogue. He writes well about travelling, sparely describing an India with the names of towns, flora and fauna. When the poet inevitably migrates back to a kitchen table in Scotland, where his Grandfather smokes Golden Virginia, it doesn’t jar. Nor does the description of looking at the Ochill Hills, perhaps more familiar to a Scottish audience, but still as much of a factual, named place as Pushkar. In two illuminating poems, written in Scots, the two locations could be seen to overlap. Both contain the same, misunderstood word, ‘annaromamoof’. When written, it’s a nonsense that we may assume is Scots from the context, but when heard could just as well be Sanskrit.

Letford locates beauty in these dappled communications. A son writes a prayer for his dead father, admitting ‘I play it as straight / as I can. It’s no always easy. Sometimes a fuck up.’ A lover reads an American novel with his brogue, making the ‘sures and yeahs [become] parodies that / brought humour to beauty that didn’t need it.’ In ‘Young Rambo’, one man decides to tell another about the goddess of fortune, and the listener responds that she’s throwing shite, not flowers: ‘It’s questionable whether / it was my wisdom that improved his mood.’ In these poems, humans struggle with the kind of monumental transcendence inherited from ideas about the afterlife, religion, high culture. They often fail. Next time, we assume, they might fail better. But they might not, and that’s okay too.

Sometimes these encounters are so simple that they seem stark and unurgent, at the most illustrative of the patchwork that Letford creates in service of his theme. Take ‘Naked’, in which someone makes an impossible wish to gift someone the ability to travel through time and see his naked lover, then realises this is impossible and settles for being able to see her himself. The sentiment is largely tender, with a slight hint of voyeurism, but in the context it seems just illustrative of the broad idea. It is only the voyeurism that challenges this; the affirmation of the lover being able to see the naked body is so baldly stated that it comes across as insubstantial. Too light a touch is applied for this poem to really riff on the theme.

In other poems, the encounters are again described so starkly that it becomes harder to read them deeply. There are works in here that are hookless, by which I mean they don’t always prod the reader with enough of the surprising wordings, syntax or imagery that warrants the desire to look more deeply.

One feels that this collection was written under the influence of much personal happiness. Though that’s not an accusation, it does explain why many of these poems draw a uniformly positive stoicism from ghastly experiences like the death of a parent or taking a possibly dysentery-related shit in a latrine. I can identify one counterpoint: a poem called ‘Sadness’, which speaks of a man like ‘a well that could never be filled. Beauty entered / and was lost.’ When this poem ends with the image of his death as ‘a doorway being closed’ with ‘the world being made poorer for it’, the conclusion feels like a missed opportunity. If we are really looking at actual corporeal existence, then that also entails examination of inhumanity. Dirt‘s two poems that hold corporate culture up as a much-needed example of revolting human behaviour only serve to shift blame onto the auld enemy of left wing Scottish artists and theatermakers. In these two poems, we don’t see dirt, only well-trodden ground.

Naturally we can observe the transcendence within that stoicism: but it would be a mistake to say the collection is against the idea of transcendence per se. One of the finest poems in the collection, ‘Temple’, is about the love between a straight man and a transsexual woman, pre and post-op. In an impressively humane description of emancipatory surgery, Letford describes the male character ‘brought low before a building designed to let his lover out.’ The image explains itself with great beauty.

‘The magic’, follows the same motion, with reference to the Loch Ness Monster. An old man is asked if he believes: ‘His eyes are / more blue than sky. The kind of blue you / can’t reach.’ On a readerly level we feel satisfied with an old-fashioned, unrepentantly Scottish bundle of tropes to get us thinking. As a critic, one can simply say that the earthly man espousing his view that the lake is deeper than you can imagine is unarguable, and proves the triumph of a joyous book, unpretentious and accurately expressed, generous in its depiction of humanity.

Dirt by William Letford is published by Carcanet, 2016.

‘Collyshangles in the Canopy’ by Ian Brown

Collyshangles in the Canopy is Ian Brown’s collected poetry. Brown is no slouch: a theatre-maker, critic and pedagogue who has contributed greatly to the renaissance of theatre both from and beyond his native Scotland. It is impressive that, among his various literary outputs and professional engagements, he has found the time to create a solid, […]