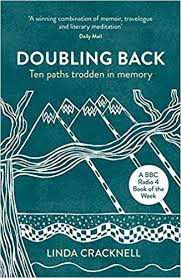 The New Nature Writer has been imagined as ‘a man: bearded, badly dressed, ascetic, misanthropic’.1 Thankfully, Linda Cracknell is none of those. In her book, Doubling Back: Ten Paths Trodden in Memory, Cracknell tramples down those gender confining binaries of space. She opens up her own memories and the places in which she finds them and enables the reader to walk with her through Gothic internal landscapes, and to tread on paths from Cornwall to Kenya, Scotland to Switzerland, and to follow in the steps of her friend’s Pappa and St Cuthbert’s pilgrims.

Anyone who walks knows of the reflective and healing qualities of pacing out our lives on the land. When we walk with a companion, we walk in parallel or in train of thought with each other: when we walk alone we revisit moments of our everyday lives that have lingered unresolved, and our footsteps plant the moments in another place where we may leave them. Cracknell shows us how those moments seed themselves and grow into something other, and, on treading the paths again, we can, like her, revisit the moments and the memories, and find imaginations of our past and our selves.

In Doubling Back, the writing is personal. It is a conversation with the reader who walks with her through that past and through her self. We walk with her through her childhood and her youth, as well as in the footsteps of others, where she makes ‘peace with the contradictory impulses of familiarity and “otherness”‘ and confronts the unreliability of memory into which her old footsteps have grown.

That gothic internal strangeness in her writing has struck me in much of her work. Indeed, in Doubling Back she reflects, ‘I suspect I was a strange child, internalised, tearful, quiet’. And yet, there is a wonderful humour in her reflections: I laughed at the self rebuke that she should have recorded all she’d stood with at the Birks of Aberfeldy. ‘I could make it an artwork,’ she writes, ‘like Tracey Emin’s and call it Everyone I have ever leant with, 1995-2008’.

Cracknell’s honesty and personal integrity in her writing is engaging, and the unfamiliar treatment of the familiar is haunting. Doubling Back reveals Cracknell’s strength of writing in the genre of New Nature Writing. I look forward to walking with her thoughts, her memories, and her conversations with landscapes again.

Doubling Back: Ten Paths Trodden in Memory by Linda Cracknell is published by Freight Books, 2014.

The Cunninghame Graham Collection Series ed. Alan MacGillivray Kennedy and Boyd, 2012 It is in his favoured literary forms of the short story, sketch and meditative essay, forms often tending to merge into one another, that Graham excels. Over forty years, between 1896 and 1936, he published fourteen collections of such short pieces, ranging over […]

The Travels of Elizabeth Isabella Spence

Elizabeth Isabella Spence (1768-1832) isn’t among the better-known of the many writers on Scottish landscape and culture. She built a modest reputation as a novelist in the first years of the nineteenth century; a brief article on her 1807 novel The Wedding-Day in the Critical Review, placed her “among the first writers” of sentimental fiction “of the present […]

Like many Victorians of means Margaret Oliphant Wilson Oliphant came to consider it a norm to spend at least part of each year abroad. Reading over the record of her life however and noting of the reality and reasoning behind her travels, one wonders if they brought her any real benefit or joy. In her […]