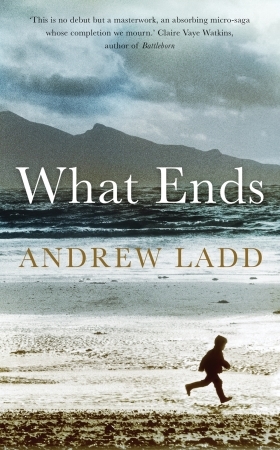 What Ends is an intriguing first novel by an Edinburgh native, Andrew Ladd, who now lives in Brooklyn, where he is the blog editor of the literary journal Ploughshares. What Ends is the winner of the Association of Writers & Writing Programs (AWP) Award for the Novel. It would be wrong, however, to expect that New York’s innovative, subversive, self-absorbed Alt-Lit community has influenced Ladd’s writing style. What Ends is, at heart, a fairly conventional novel, despite its (successfully) splintered chronology; the novel begins in 1980, moves to 1995 and rewinds to 1988 before concluding in 2002.

Most of the gentle, controlled, low-key action takes place on Eilean Fìor, Gaelic, incidentally, for Real Island. Eilean Fìor is not based on an actual island, however – it’s an amalgam inspired by the author’s researches into Canna and the Small Isles generally, St Kilda and Lewis.

The novel concerns George and Maureen MacCloud, owners of the island’s pub/guesthouse, and their children Barry, Flora and Trevor, the latter destined to be the final child born on the island. Across the twenty-two-year span of the book we learn of the ways in which the children mature into individuals, becoming resistant to both island and family life, while the parents by contrast seem increasingly constrained and insular.

This is not a novel of grand set scenes and resonating melodrama, but of commonplace episodes which do not need hyperbole to make them meaningful to those who experience them. Rats arrive on the island. A bridge disintegrates and is washed away in a storm. Barry goes to boarding school on the mainland. He grows moody in adolescence, becomes a morose, brooding presence and then an absence. Flora falls in love. She has a painting accepted for an exhibition, where it sells. Maureen has a panic attack when Flora announces her wish to go to Edinburgh Art College. George enjoys cryptic crosswords until, in later life, he starts filling the white boxes with nonsense. Such are the humdrum setbacks and small triumphs that constitute life for these islanders.

Time is doing its thing – but in this world, time seems ultimately to dampen aspirations, and to grind individuals and communities down with lost chances, soured desires and sheer contingency.

The credible characterisation, often strong dialogue and beautifully handled narrative structure will pull you in so tightly that you will feel pangs of disappointment and dissatisfaction along with the MacClouds. ‘Time isn’t passing, it’s circling,’ we’re told and it’s hard not to think time in Eilean Fìor is wheeling about with increasingly dolorous evidence of the Law of Diminishing Returns. There’s hope, though, even if time ultimately deprives people of their potential. As if to alleviate the sombre elements, there is warmth and occasional humour. Part of this novel’s appeal, however, is its bravery in tackling a difficult subject – the way in which familial love and concern can counterintuitively diminish or alienate a person:

Of course he [teenage Barry] still loved his family – how could he not? But did he really like them anymore? Was that why home had become so unbearable?

Perhaps a family itself, the novel suggests, is a kind of island – a claustrophobic haven, a beloved, predictable place from which one sometimes needs to escape.

‘What ends’ for so many people is something that seemed to have barely begun before time and predicament took their toll. Even when change adopts a guise of dynamism it is not for the better. In the 2002 section of the book, modifications are made to the guesthouse to bring it up to date – the provision of internet, energy-efficient windows, redecorated rooms and so on – but:

[…] now the very spirit of the place seemed dangerously in flux, transforming something he [Trevor] neither cared for nor completely understood.

There’s no denying the many sadnesses here – despite glimmers of love and hope and excitement, this novel is played out in an achingly minor key. I appreciated the subtle, telling details in the unshowy writing – the cup of tea with the tacit dram inside it, the words hanging unspoken between the lines of dialogue. I have a few reservations – the occasional cliché (‘coal-black hair’) slips through, and it strains credibility when paramedics refuse to allow a soaking-wet imminent-father-to-be to accompany his wife in an ambulance to the (distant) hospital, leaving him instead to find his own way there.

This may sound like a bleak book – and What Ends is, really, a novel of ‘slow, inexorable decline’, of people diminished by circumstance and each other and missed opportunities; none the less it is a surprisingly rich and compelling read. Ladd reminds me of a twenty-first-century Neil Gunn in that he has evoked an authentic-seeming Highland/island community, peopled by fine, flawed characters in whom we believe and take a genuine emotional interest. I think this downbeat tale will also appeal to readers of Thomas Hardy’s elegiac novels; it is an atmospheric and carefully textured tragedy that is hard to shake off once you’ve read it. What Ends is a moving and auspicious debut.

What Ends by Andrew Ladd is published by Oneworld, 2014.

‘An Introduction to Gaelic Fiction’ by Moray Watson

In this, “the first guide to Gaelic fiction”, Moray Watson makes a significant and long overdue contribution to Gaelic, and therefore Scottish, literary studies. Some readers of Gaelic fiction will not be surprised that this is a relatively slim volume; others will feel that it is too slender. Although Gaelic, in one form or another, […]