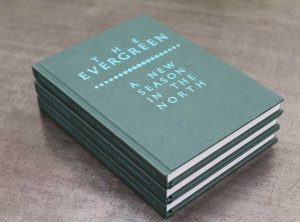 This is the mid-point of a four-volume project. Handsomely produced and in appearance very like the first, these hardback anthologies are published by an arm of the Edinburgh Old Town Development Trust and inspired by the four issues Patrick Geddes and colleagues published from Riddles Court in Edinburgh’s Lawnmarket. Their inspiration and title came from Allan Ramsay’s 1724 anthology, The Ever Green.

Ramsay was said to have democratised poetry by making the capital’s morally questionable inhabitants worthy of poetic immortalisation. Petra Reid’s ‘Lucky Spence’s Last Advice Part II’ takes that for granted; and though her language has been anglicised, Lucky still uses Habbie stanzas; her sense of irony and eye for the telling detail are intact.

These days Lucky works at a zero job to avoid broo sanctions. She’s done by dinnertime and offers the Real Reekie tour, keeping out of sight by ‘dodging Old and New Town radar’. She wonders how long Blair Street’s last sauna will last, bemoans lap dancers and junkie smackheids and a skank who burnt to death with lighter fuel, finally asking:

How free’s my will?!
I’m no dead yet I’m Lucky Spence —
Here for you still.

‘Haar, as we know, reduces townscape to stage set, eliminating perspective and truncating towers and spires’: Jim Gilchrist reaches for an exultant, more recently remote Edinburgh that exists on the edge of memory. A photograph of street musicians, three Italian immigrants and his Uncle Harry, in berets and open necked shirts, bookend the search for other silent Grassmarket musicians, from the terminal psalms of Covenanter martyrs and Robin Oig MacGregor to back green singers, concert parties. Informal concerts and impromptu jam sessions from more recent Festivals:

When I emerge […] the late-night ‘Market has been happed in frozen fog, a few revelers lurching in and out of vision like roistering ghosts, the Castle’s lights a corner-of-the-eye glimmer far above, as faint as the Pleiades.

These are the conditions where he says any demarcation between the real and the imagined can waver and ‘the Grassmarket becomes a state of mind.’

A series of poorly produced, ghostly photographs do more than illustrate Elizabeth Darling’s investigation. Children work and play in an Edwardian garden off the Canongate — where ‘breweries and gasworks jostle for space’ — or stare from behind well ordered desks, recipients of ‘the most progressive welfare work of the period’.

Among other things ‘A World in Action’ is a commendable piece of detective work, piecing together the life and work of Lileen Hardy, who left no papers but her work initiated social and urban reform of the Canongate poor. The impact of the images becomes clear when Darling implies living conditions: ‘Clean, well lit and ventilated’ with Liberty patterned curtains, the classroom was different from the single ends where the children lived. And social improvement underlined the start of their day. Their blue smocks had red/pink collars and cuffs, ‘and, once called to order [they] sang a greeting song to one another.’

David Wheatley says he’s ‘no sae supple/ wi the habbie […]’: Writing from Aberdeen, his fourteen ‘Sonnets to Robert Fergusson’ conjure more ghosts, updating Rab on the Independence Referendum as prologue to an affectionate and often humourous tour through Fergusson’s work with contemporary and near contemporary references and updates, finding space for one of his other enthusiams, James Clarence Mangan. This sequence is more than pastiche or experiment. It’s a bold exploration of another language, it’s writers, rhythms and textures, in places, funny and beautifully. One hopes it is the forerunner to other similar ventures.

Contributions to The Evergreen‘s first issue ranged pretty widely, but this time they stay closer to home. Brian McLaughlin’s ‘Letter from Barcelona’ may well be part of a regular feature — the previous issue had a ‘Letter from Venice’ — and apart from Wheatley’s memos from the north, news of life beyond what was the Maybury Roundabout comes from James Kelman’s ‘Untethered’, which occupies a position one can imagine no other writer filling.

Similarly, Lucy Ellmann’s ‘Shop Girls of Edinburgh’, is a wonderful piece of raw energy that hauls Edinburgh into the present with a barely imaginable future. These girls are the battery hens of mercantile enterprise, optimists with nothing to be optimistic about:

Here they come, teetering on their six inch heels, their faces a heavily marketed shade of orange decorated with Cubist mascara work, four pounds worth if a penny, and that’s per eye. They legs are splayed, or otherwise displayed, revealing every patellar, fibular, femoral and tibial contour without discrimination, in leggings, tights, or nothing at all — just black-and-white striped crocheted hotpants will do. Apparently. Legs must be shown, from top to bottom, it is The Law.

Already four issues seem barely enough. This project started well and, by staying close to home and avoiding Edinburgh’s more obvious achievers, has got better. There may well be a lesson here, as well as interest on every page.

The Evergreen: A New Season in the North 2 edited by Sean Bradley is published by Word Bank, 2015.

‘The Evergreen: A New Season in the North 4’, volume IV, edited by Elizabeth Elliott

In the spring of 1895 Patrick Geddes and unnamed Colleagues, published the first of four issues of The Evergreen from Riddles Court in Edinburgh’s Lawnmarket. Their inspiration and title came from Allan Ramsay’s 1724 anthology, The Ever Green. This issue ends The Evergreen’s latest reincarnation. Published by The Word Bank, the publishing arm of the […]