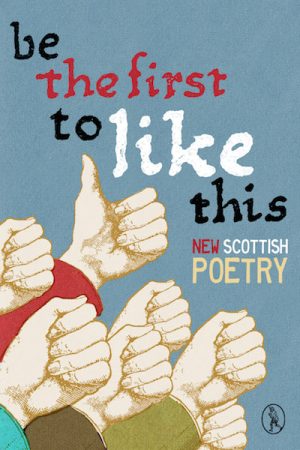 I know who won’t be the first to like this anthology of new Scottish poetry: readers with an interest in linguistic diversity. Editor Colin Waters has chosen to ignore poetry ‘in Gaelic, Lallans, Shetlandic and Scotland’s other languages’. Why? Because ‘it is with enormous regret and not a little shame that I must admit I can’t read them.’ This seems to me the flimsiest of excuses and the book suffers significantly as a result of the editor’s strange, self-defeating choice. After all, doesn’t the editor, like the rest of us, read works of world literature in translation? And he is, after all, the Communications Manager at the Scottish Poetry Library — a library whose shelves would be horribly diminished if Gaelic, Lallans, Shetlandic et cetera were excluded.

In many other ways, the book is well-intentioned. Royalties from the anthology go towards Glasgow’s Clydebuilt Mentoring Project, which pairs promising new writers with established authors. (Some graduates of that programme have work in Be The First To Like This). And the book has an illustrious precedent. Both Liz Lochhead in her foreword and Colin Waters in his introduction make reference to Donny O’Rourke’s highly influential anthology Dream State: The New Scottish Poets (published in 1994 and revised in 2001). Lochhead refers to it, without hyperbole, as an ‘era-defining anthology’, and Waters calls it an ‘obvious inspiration’. Some of the elements that made O’Rourke’s anthology ‘era-defining’ — such as a beautifully poised, eloquent introduction, an openness to linguistic diversity and an uncompromising quality threshold — are not, perhaps, quite as rewardingly present in Be The First To Like This. With that said, Waters has captured something of the vibrancy of the current poetry scene in Scotland’s Central Belt.

Some of the authors here have already made a name for themselves, within Scotland and further afield. Miriam Gamble has an Eric Gregory and a Somerset Maugham award for her wry, layered, powerful writing, and Niall Campbell’s debut collection Moontide was a Poetry Book Society Recommendation. His work has the tight, quiet sizzle and sudden electric jolt of the poetry of, say, John Burnside, but Campbell has his own distinctive voice. William Letford’s work has received widespread praise for its sound combination of unpretentiousness and implication. These three poets fully deserve the acclaim they have received, and it is gratifying to note that there are other poets in the anthology whose work stands up to theirs, being of commensurate quality. It’s a shame that poets such as Gamble’s partner, poet Pàdraig MacAoidh/Peter Mackay — who writes in Gaelic and provides excellent translations in English — could not feature in a supposedly representative Scottish anthology. I can think of a dozen such writers whose work is good enough to merit inclusion in Be the First to Like This, but who are excluded on those unconvincing linguistic grounds.

A number of poets represented here are becoming well known in Scotland. Patricia Ace writes with the humour and sting of the tragicomic in ‘The Clangers on Acid’, a prose-y feeling poem that is so powerful it’s hard to shake off:

Marion McCready’s ‘Wild Poppies’ are ‘earth’s first blood’. This poem is a good demonstration of Colin Waters’ asserted wish to avoid poems that play safe with nature or stick to typical ‘poetic’ subjects. Waters has largely aimed instead to offer poems about, for example, watching tv, text-messaging, internet dating and STDs. He chose only to include nature poems if they were idiosyncratic, disconcerting — poems which followed Ezra Pound’s credo ‘Make it new.’ McCready addresses the poppies:

releases your scents, your secrets,
bees blackening your mouth

as your dirty red
all hangs out.

McCready’s intense poems immediately made me want to seek out more of her work, and the same is true of other writers, such as Angela Cleland (who also writes science fiction as Cleland Smith). Her poetry is accomplished — by turns witty, original, loaded. Poems by Tracey S. Rosenberg, McGuire and Aiko Harman were also particularly impressive.

At its best, Be the First to Like This reaffirms the outstanding qualities of the best known writers represented in its pages and makes the reader hungry for more work by the talented poets who are not (yet) as well known. The less successful of the poems show promise — there are pieces which demonstrate verve or even linguistic brilliance but which are diluted by weak lines, failed tricks or indifferent endings.

Half of the writers represented here were born outside of Scotland. It is wonderful that writers from varied backgrounds are attracted to Scotland; perhaps it’s even a form of validation that, culturally, Scotland is doing something right. Many of the poets hold creative writing degrees and/or have received assistance from the Scottish Book Trust. Quite a few of them have created literary nights, collectives, multidisciplinary collaborations and so on. There’s a lively literature scene in Scotland at the moment, which this book points to; still, it doesn’t quite represent new Scottish poetry. In excluding certain languages, Waters has inadvertently and inappropriately reflected a prejudice that is unfathomable, anachronistic and out of kilter with what is happening in Scotland’s poetry scene, which is more linguistically diverse, and more inclusive, than this anthology suggests.

Be the First to Like This edited by Colin Waters is published by Vagabond Voices, 2014.

In an extraordinary turn of events, Jim Carruth gained a laureateship before he had a book published. He had a handful of chapbooks in print, but his appointment as Poet Laureate of Glasgow in 2014 predates by a year his verse narrative Killochries. This sparse but fluid sequence follows the course of four rural seasons, […]