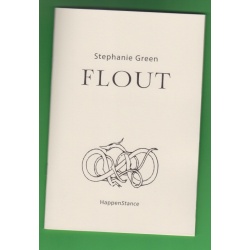 This pamphlet, Stephanie Green’s second — and now sold out — brings together poems inspired by the landscapes and culture of the Shetland Islands. Islands and the ways of life of their communities fascinate me, as they do many others, and more so as it seems our lives become even busier, even more crowded, even noisier and more demanding. In approaching Flout, I found myself looking forward to peace and space and the kind of natural rhythm that modern life often lacks.

I was also somewhat apprehensive about my capacity in relation to the use of Shaetlan (or Shetlandic). However, my apprehension was unnecessary. The language of these poems, while making use of lovely words like ‘bonxie’, ‘trowie’ and ‘kishie’, is musical and absolutely accessible. Unfamiliar terms are given place within a succinct, useful glossary.

Flout presents sixteen discrete poems, one of which — ‘Unst’ — is sub-divided into eight parts. Together, they provide a real sense of toe-dipping into Shetland life, scenery, culture and folklore. It’s not simply this, though. There is also much that seems to be drawn from the lives that surround the poet’s own life, lives that are informed and transformed by being placed within the geographical setting of the collection. There is an overarching sense too of ‘northernliness’, of the poet finding herself — and being transformed — within this landscape. In ‘Unst i Ultima Thule’:

Into its icy waters, forgetting
I cannot swim?

And in ‘Unst ii Steekit Stimna’: ‘The further north I go, the more / I must face myself.’

It is a landscape that is apprehended and apprehends in this collection. It also stands independently though, shouldering the power of the sea, the wind and the weather, from violent storm to ‘shaela’ (a light summer mist). Birds clamour — in a ‘wedding day of wings’ — sea creatures visit ‘slicked with dreadlocks’, and superstition makes it unlucky to speak too directly at sea. It’s a vulnerable place too, for all its energy and power, sitting as it is in a wind that blows from Iceland.

Flout is a clever title. A flout is a ‘square of wool prepared for spinning’, referencing the history and culture captured within these poems. While to flout, in this context, could be to challenge or disregard rules or convention, and these poems certainly bring an intensity of perception that is fresh and unconventional, the term also encapsulates the process of writing and bringing these poems to life. In the title poem, ‘I must learn to tease, / pull gently’ […] ‘Why do I always expect it to be easy, / to come out pure first time?’ There’s a distilled sense to these poems that makes them pure and keen.

Flout by Stephanie Green is published by Happenstance Press, 2015.

Santiago is Cheryl Follon’s third collection of poetry. It departs from the previous two, in subject range and in the form of the pieces it brings together. And it is a departure, too, in terms of our more usual expectations of poetry. It is a collection that assembles between its covers the immense and the tiny, […]