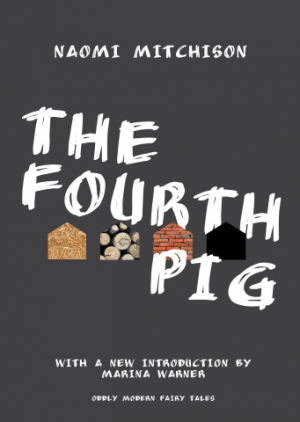 This elegantly produced little volume is the reissue of a miscellany of a few of Mitchison’s early shorter writings, published in 1936 and thereafter largely forgotten. It has now re-emerged from the shadows as one of a new series of Oddly Modern Fairy Tales, edited by Jack Zipes. It is certainly an extraordinary compilation, characterised by Marina Warner as a ‘mish mash’, but offering the reader challenging encounters with an early modernist writer of wide and wayward sympathies and intellectual zest. Peter Burra’s early review in The Spectator1 in 1936 commented tartly that the contents ‘have little in common but their hints of leftist tendency’. It should be said that Warner’s own authoritative introduction commenting on Mitchison’s relative recent neglect suggests mischievously that ‘she seems ripe for Bloomsbury fandom’.

By 1936, when The Fourth Pig was published, Mitchison’s vastly ambitious fertility romance, The Corn King and Spring Queen, had proved a considerable success but her subsequent attempt at a contemporary novel, We Have Been Warned (1935), foundered in an awkward autobiographical mix of politics, sexual explicitness and travel reportage. The Mitchison family had not yet made their life-changing move to the remote Carradale estate on Loch Fyne and Mitchison, still based on London, was expending much of her prodigious energy in supporting her husband Dick’s two unsuccessful campaigns as a Labour candidate in the unrewarding constituency of King’s Norton, Birmingham.

These experiences colour the themes preoccupying Mitchison in the collection. There are eighteen items in the volume: one drama script, six poems and eleven prose narratives. Though these differ strikingly in genre, style and mood, they have in common that they all draw to some extent from the deep wells of traditional and national European folk and fairy materials which had been collected and popularised in the preceding century. Mitchison’s versions mostly employ some form of first-person narrative, and are best seen as tangential, sometimes surreal, takes on the original folk tales.

Several of Mitchison’s abiding inter-linked concerns thread themselves through the volume. These include an alertness to the presence of insidious evil forces; the oppressive nature of capitalism; feminine fortunes declining from the resilience of bright girls to the resignation of older women; the reality of the ‘debateable land’; the fairy world; and finally the underlying weak but resilient force of human hope.

The first piece in the collection confronts us with Mitchison’s idiosyncratic approaches. It references the traditional tale of the little pigs, but is told by a fourth sibling who is not mentioned in Jacobs’ source version. Could she indeed be a sister? She expresses her melancholy Cassandra-type premonitions about the existential menace of the wolf. In effect she is expanding the simple tale, responding to the famously jaunty song which had first appeared in 1933 in Disney’s film The Three Pigs, ‘Who’s Afraid of the big Bad Wolf?’ Ominously this was the year that Hitler, who relished his nickname Wolf, started to seize control in Germany, the year of the Reichstag Fire. The wolf is seen as the cunning archetypal predator, and the sister’s final thought as she sings the brave song of the pigs is: ‘I know there is no way of stopping him, even if I could help being afraid. But I cannot help it. I am afraid now.’

In the poem ‘Omen of the Enemy’ another malevolent creature appears in the form of a cormorant croaking over London from the cross on St Paul’s Cathedral in 1931, and intimations of lurking menace surface throughout the collection. The treatment of the captive Brünehilde by the brutish Gibichung guards as she is transported down the Rhine leads to her immolation in the fires of the Götterdämmerung. An eerily prescient detail.

Mitchison tackles capitalist depression in the clever if laboured ‘Frogs and Panthers’, a combination of Aristophanes’ comedy The Frogs in which she had performed as a girl in Oxford; and her experience of industrial poverty in Birmingham. The beautiful Dionysos Bacchos, god of pleasure, accompanied by his lethal pet panthers and his slave Xanthias, crosses over the Styx to the accompaniment of the discordant frog chorus and finds himself in a rundown Birmingham brickyard in the guise of Mr Denys Backhouse a wealthy filmstar. This is the setting for a debate between impoverished freedom and servile employment. In the end Dionysos nonchalantly destroys the yard, shattering its tightfisted proprietor, and successfully invites one of the unemployed workers back across the Styx into Hades and comfortable slavery.

In two further folk tales, ‘Hansel and Gretel’ and ‘The Snow Maiden’, Mitchison also tries to exploit the context of Birmingham’s working class poverty: in the former the witch is portrayed as a capitalist hag whose cottage is built of gold and silver and decorated with bank notes and crossed cheques; and the entrancing ‘Snow Maiden’ melts away into impoverished domesticity as a housewife in the Depression.

The centrepiece of the volume is ‘Kate Crackernuts’, a delightful verse play written for performance by children. It is based on the Orkney tale of the Two Kates, active resilient sisters who fall into Alison Lurie’s category of Clever Gretchens.2 They save the sick Prince from the clutch of the fairies. The rhyming verse is nimble and nicely inset with songs.

Fairyland is a favourite theme for Mitchison, who nursed the notion that there existed some kind of enhancing but perilous magical dimension to human life. The topic is explored in ‘Soria Moria Castle’, ‘Adventure in the Debateable Land’ and ‘Mirk, Mirk, Night’. Here is the terrain of the alluring but dangerous hollow green hills and caverns, of the Huntly Bank and Kirk’s Secret Commonwealth; the haunts of Tamlin, the Demon Lover and the fatal Queen.

Mitchison’s treatment of these tales involves all sorts of bizarre quests, weird marvels, trials and ordeals but in the end the good folk win back through into the happy ordinariness of middle earth: ‘— and so we were out of the debateable land and tomorrow would be a working day.’ But like the wolf, the perilous other world is still there.

As ‘Kate Crackernuts’ reveals, it will not do to underestimate Mitchison’s qualities as a poet. The seven poems in the selection demonstrate her willingness to be experimental with forms. They include an effective pastiche of a border ballad, a rhyming couplet narrative and a romance tinged with the hues of the Celtic Twilight. Most of her poems however employ an attractive loosely conversational style, reflecting possibly the influence her friendship with the young W H Auden teaching at that time in Helensburgh. Notable among these is ‘Pause in the Corrida’ a moving personal lament for ‘the black bulls of hate’ in the Spanish bull rings.

Finally, ‘A Grand-daughter’ is well worth mentioning. In this convoluted essay in prophecy the grandmother is clearly Naomi herself set in relation to her formidable female relatives. A woman living in the 1960s reflects on the life of her grandmother thirty years earlier and ponders how far she could have foreseen the future. Mitchison’s vision of the intervening years is far less gloomy than the tone of other contributions in the volume. It is also less accurate. There was no Second World War. She records that between the Thirties and the Sixties the feared rise of Fascism came to nothing, and that the traditional pyramidal social structures cracked under the pressure of vaguely benign Marxist influences. Whimsically, the catalysts of a new age of democratic change are said to have been a revived interest in the magical aspects of life and the growth of a mass movement in favour of dancing — a curious anticipation, perhaps, of the Swinging Sixties. Mitchison loved dancing.

Given the variety and qualities of these eighteen items, readers will, I believe, find this selection a richly nourished pig in a handsome poke.

A welcome recent development in Mitchson studies is that the publisher Kennedy and Boyd has been reissuing a range of works from her vast oeuvre under the editorship of Isobel Murray and Moira Burgess.

The Fourth Pig by Naomi Mitchison introduced by Marina Warner is published by Princeton University Press, 2014.

Naomi Mitchison’s ‘We Have Been Warned’ in Post-Referendum Scotland

Over the last few years Glasgow publishers Kennedy and Boyd have been reprinting Naomi Mitchison’s ‘most significant work’ in their Naomi Mitchison Library series, with the help of Professor Isobel Murray as series editor.2 These editions have made previously out-of-print novels and diaries available to the public once again, including Mitchison’s controversial novel of the inter-war period, We […]