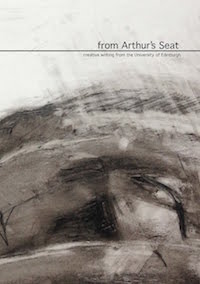 To begin with, it seems prudent to point out that anyone who expects that the contributions in this collection will be set in or revolve around the city of Edinburgh may be somewhat disappointed. Apart from the title and the appealing illustrations of iconic landmarks of the city, the anthology’s connection to Edinburgh lies in the fact that the bulk of the contributors included have studied in or are still studying in Edinburgh. However, this is not to say that the title From Arthur’s Seat is entirely ill-chosen, since the volcanic hill with its Arthurian legends and literary links to Scott and Hogg, among others, affords an expansive view over the city and beyond, just as from Edinburgh the imagination of this international assortment of aspiring writers roams freely in space and time. It offers the reader, as Robert Alan Jamieson writes in his foreword, ‘glimpses of elsewhere [that] create a sampler full of treasures and delights to be savoured at leisure.’

The collection includes no fewer than twenty short prose texts and excerpts from longer works, six poems, and it is rounded off by four contributions which have already gained awards from the University of Edinburgh. The heterogeneous texts cover a range of unlikely settings, curious perspectives, thought-provoking ideas, unique voices and innovative writing styles, making fleeting incursions into a wide array of different worlds both geographical and psychological, reflecting the respective backgrounds, experiences and sensitivities of their creators. The variety of subject matter, treatment and quality makes such a collection difficult to assess as a whole. Given the sheer number of immensely readable pieces, this review must necessarily be selective. Prominent, of course, are the award-winning pieces by Dominic Hale, Zoë Ramsay (both written in Lowland Scots), by Marianne MacRae and Quentin Scobie.

But there are other gems that also display a maturity of style, command of language and confident treatment of their subject showing that their talented creators have found their voice. Among them four in particular stand out and deserve closer examination.

Set in Brooklyn, ‘A Mutual Agreement’ by Ashley Rauls is a delightful vignette of intercultural difficulties when an Anglo-Saxon woman’s romantic expectations come up against her German boyfriend’s preference for a practical approach to getting married. While she wants her intended to propose — down on one knee, ring and all — he argues from his inconveniently politically-correct standpoint that she is just as entitled to propose to him. Riddled with clever tongue-in-cheek clichés and national stereotypes, this is a humorous and witty piece that also ridicules over-adherence to ‘[e]qual rights blah, blah, men and women are the same blah, gender equality blah, blah.’ The recurring comment of ‘He’s German, after all’ provides a comic touch and is eventually given a twist as the punchline.

‘The Ghost’ by Ignacio B. Peña also starts off rather lightly, with a man repeatedly opening the door to trick-or-treating Halloween kids, but it soon descends into tragi-comic farce. The miserable, lonely father Mark, forced to spend his first Halloween without his little daughter because her mother won’t allow her to be with him, takes out his spleen on the puzzled onlookers in the street. He goes out dressed as a ghost in an old sheet, frightening children and adults alike. In the space of two and a half pages Peña here vividly shows the desperate attempt of a man trying to come to terms with the break-up of his family at a time when others are out enjoying themselves. This piece has the force and compactness of a short story and manages to be both comic and moving at the same time.

Equally compact and very moving is ‘The Ticket’ by Peter Mayne, a piece that delineates the harsh, inescapable atmosphere of hopelessness and poverty in a mining community where accidents are common. The voice is that of a young man growing up in the tradition of a mining family. From the beginning, his fate is sealed and he ends up in the mines, too. His only hope is winning the lottery, and he buys a ticket, just like his old man before him — also not for himself, but for his son. The laconic relationship between father and son — long abandoned by a mother who chose to up and leave — provides the only human warmth in the otherwise bleak environment. What makes this contribution stand out is the narrator’s accomplished monotonous tone and the seemingly dull acceptance of the inevitability of this way of life. The piece is given universality by the use of the second person narration, implying that this is not only a personal life story, but the typical vicious cycle of the working poor.

While these three pieces have a transatlantic setting, number four is set closer to home. Inspired by Edwin Morgan’s instamatic poem ‘Glasgow 5 March 1971’, ‘My Mother Always Said’ by Lori Sheirich is a sparkling ‘ragged diamond’. It provides us with a powerful background story to Morgan’s snapshot of indiscriminate violence in Sauchiehall Street and gives an alternative take on how the two young Glaswegians end up starfished and bleeding in the shop window of a jeweller’s. This appropriation inventively contextualises the horrific scene and changes the focus from the randomness of the violence in Morgan’s poem. The starkness of the imagery and sounds still shock, though: the girl victim hears her ‘own scream intermingle with the sound of shattering glass [and watches] as red poppies began to bloom along the bottom’ of her ‘brand-new slick white raincoat’. Confident in tone and skilful in framing the events between the mother’s prophetic warning and the drastic end, Sheirich is one of the many promising writers featured here.

In this interesting sample of creative writing from the University of Edinburgh, there are some pieces which ‘reek’ of the creative writing class rather than of individual creativity, and other pieces which might have profited from a less benign editorial eye. However, this collection is an admirable and, on the whole, often professional compendium with the best contributions leaving the reader eager for more.

Daniel Shand’s darkly unsettling debut novel Fallow revolves around the relationship between two brothers in their mid-twenties, Paul and Michael Buchanan. The picaresque narrative begins in medias res when we encounter the siblings on the run, lying low somewhere in an unspecified area of Scotland, probably in the hills north of Glasgow. Michael, the younger of the two, has […]