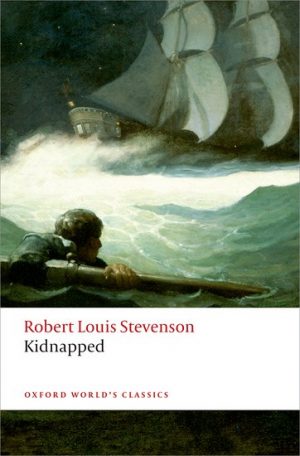 Ian Duncan’s introduction to the new Oxford World’s Classics edition of Kidnapped has three main sections: ‘History’, ‘Romance’ and ‘Adventure’. The first outlines the two historical events that inspired the novel, the kidnap of James Annesley and the Appin Murder of Colin Campbell, the second traces the influence on Stevenson of his great predecessor in Scottish historical fiction, Sir Walter Scott, and the third describes the impact of Kidnapped on the adventure story (and adventure film), mainly through Stevenson’s influence on John Buchan, and his thriller The Thirty-nine Steps. These are, to be sure, conventional contexts, though not for that reason unnecessary for discussing Kidnapped, and Professor Duncan deftly supplies new readers of the novel with what they need to know about its sources, traditions and innovations.

At the same time, the conventions of critical response to the novel are subtly revised and modified by Professor Duncan’s lively readings and his individual response to what Stevenson achieves. Stevenson’s treatment of the theme of kidnapping has, as Professor Duncan says, a legendary quality, and Stevenson’s interest in the Appin Murder is firmly but not didactically embedded in an acute awareness of conditions in the Highlands in the early 1750s. While due deference is given to the debt Stevenson owes Scott, and significant parallels between Kidnapped and Scott’s Waverley and Rob Roy are noted, the differences between them are also shown as significant, particularly the higher emotional tension created between the hero, David Balfour, and his Highland mentor, Alan Breck, than Scott dares to create with his characters. Such intensification in comparison with Scott is also noted in the section on adventure, rightly stressing the density of Stevenson’s depiction of the physical effort of David and Alan’s flight across the heather, what Professor Duncan memorably refers to as a ‘hyperreal mimesis of bodily sensation’. It is this concentrated focus on the physical experience of the journey across the Highlands that shifts the novel out of the historical and into a more modern sensibility of close empathy with the fictional character’s plight. Here it leads to the paradox that for the reader the historical trappings of the novel, authentic though they may be, become secondary to the sensual experience it offers the imagination. ‘The flight in the heather is a flight out of history’, as Professor Duncan says, rather subverting his own conscientious attention to the history behind the novel, though also justifying his suggestion that Kidnapped is in the line that leads to James Bond.

This edition of Kidnapped is therefore well worth obtaining for its thoughtful and provocative introduction. The note on the text and the explanatory notes are fuller than those of Emma Letley’s 1986 World’s Classics edition, though I miss her attention to levels of language (albeit Professor Duncan’s introduction pays just tribute to Stevenson’s style), and of course the inclusion of the sequel novel Catriona in the same volume. This new edition has instead to make do with a bare page at the end of the introduction, ‘The return of Alan’, to try to cover the later novel, amongst other things. As elsewhere, there are intriguing thoughts in this section but I suspect those who have already read Catriona will get more out of it than new readers of its predecessor. One has to hope that they will be sufficiently interested to seek out the second novel, but Professor Duncan’s observation that Catriona gives us, ‘instead of outlaw fellowship in the heather, the prudential, sanctioned destiny of marriage’ is not exactly enticing. It raises a question that the introduction to this edition hardly touches on, the nature and status of the narrator of Kidnapped. If Catriona is any guide (and it cannot have been when the earlier novel was written), the David Balfour who tells us his story is a prosperous and happily-married laird with two children. That might explain the tone of voice the Kidnapped narrator adopts, especially in relation to the naive errors of his younger self, but perhaps not the air of uncertainty about the future that surrounds him. As Professor Duncan says at the close of his introduction, David Balfour at the end of Kidnapped is for readers ‘still standing outside the British Linen Company bank[…], thinking of his friend on the hillside’. No doubt this is because Stevenson himself was not quite sure what happened to David next, perhaps for biographical reasons, as Stevenson himself was not quite able to see his own future, on the cusp of dependence on his father’s support, particularly financial, and standing on his own feet. Related to this is the theme of the search for a father substitute in Kidnapped, leading to what Professor Duncan calls ‘a sinister sequence of paternal surrogates: treacherous Ebenezer, grim Hoseason, and the psychopath Mr Shuan’, a search from which Alan Breck rescues David by refusing to play the game.

The father-son problem links what Professor Duncan tends to present, because of the structure of his introduction, as the two parts of the novel, the story of the kidnap, with its roots in the folk-tale of the abused orphan, and the story of the fugitives in the Highlands. He prefers the second to the first, and draws attention to the way the novel stops and starts until it really gets going when Alan appears. But Kidnapped is remarkable for the number of times the hero crosses a boundary, usually marked by water, from one realm to another. To call attention to this as liminal is to deploy a cliché, but the feature is both integral to the fairy-tale shape of the story and a signpost towards the later genre, the thriller. But Stevenson is capable of holding the novel together by more than just his leading character. Professor Duncan is rather dismissive of Mr Rankeillor, the lawyer who helps David to his fortune at the end, saying that ‘he might have stepped out of one of Scott’s Edinburgh novels’, but the theme of law is a strong one in Kidnapped. David’s naive incredulity at the bias of Highland justice as Alan describes it rests on an assumption of superior legality in the Lowlands that is undermined by Rankeillor’s chicanery in luring Ebenezer to incriminate himself in the kidnap, suggesting that the law is not so far beyond manipulation in the Lothians as David seems to believe. Professor Duncan’s introduction pays attention to several aspects of Stevenson’s background, not excluding his association with lighthouse-building, but perhaps neglects his legal training, another profession he turned his back on. But an introductory essay cannot cover everything and this one is remarkably and enjoyably full, a little masterpiece of concision that will reward those coming to the novel for the first time, and those for whom it is an old friend.