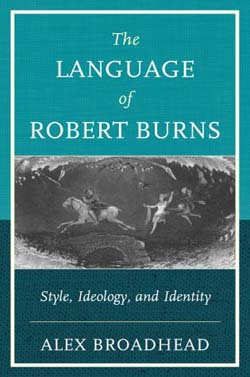 Alex Broadhead’s The Language of Robert Burns: Style, Ideology, and Identity is the first book-length study of Burns’s language use, a topic that is much deserving of extended critical scrutiny. While several critics have analyzed this issue, few have applied an intensive linguistic methodology in order to assess and interpret Burns’s poetic motives and strategies. Broadhead observes that ‘the nuances of Burns’s language demand that we make use of the most precise tools currently available’ (x), adding that ‘twenty-first-century sociolinguistic theory is uniquely situated to help readers of Burns to develop a heightened appreciation of the creative dimensions of his approach to language’ (p. ix). Applying such sociolinguistic tools throughout the book, Broadhead enables readers to better understand the depth and complexity of Burns’s language use in his poems and prose, which ‘are deeply marked by the linguistic concerns that preoccupied his peers’ (1).

This aspect of Burns’s writings has often been misunderstood, especially by those who have traditionally sought to establish his seminal role in the eighteenth-century ‘Scots vernacular revival’. Instead of envisioning Burns as the last great Scots poet defying forces of English cultural assimilation, Broadhead presents us with a poet experimenting with language and deploying it in often unexpected ways; indeed, he suggests that ‘Burns’s poems sowed the seeds of a future imaginative reconceptualization of Scots’ (72). Focusing on this transformative element of Burns’s writing allows Broadhead to both situate and distinguish the key elements of the poet’s language use, features which continue to captivate readers in the present. The often sheer strangeness of Burns’s diction (e.g., ‘Thy embryo tuneful flame’ from ‘The Vision’) confounds readers expecting a ‘rustic’ earthiness in the writing of a labouring-class poet. Broadhead compellingly argues that ‘Burns’s response to contemporary understandings of language is characterized by a consistent desire to transform and to reinvent its functions, boundaries, and taxonomies’ (1), further suggesting that ‘Burns’s writing is a crucible in which existing languages and about language are alchemized’ (4). It is a great strength of Broadhead’s book that he is able to explore this crucible in a thorough, convincing fashion, accounting for the multilingualism at the heart of Burns’s poetics.

In order to fully assess Burns’s transformative multilingualism, Broadhead investigates his writings in impressive depth, examining language use in the poems (chapter 1), prose and paratexts (chapter two), use of stereotypes (chapter 3), instances of transformative language contact called ‘transmugrifications’ (chapter 4), and use of code-switching (chapter 5). Noting that ‘the modern understanding of Burns’s language as a synthetic hybrid of multiple varieties is one that would have been alien to many late eighteenth-century reviewers’ (7), Broadhead tackles the Scots / English division that fueled debate about Burns’s role in ‘preserving’ Scots in an era of cultural assimilation. While this debate was perplexing to Burns’s contemporary readers, Broadhead suggests that the poet himself was also ensnared in its complexity, noting that ‘in the course of his poetic career, Burns never found a satisfactory middle ground when forced to characterize the relationship between English and Scots’ (101). One of the key insights in The Language of Burns helps us to dispense with this long-standing conundrum by focusing on distinctions within English usage (viz., the concept of ‘Scottish Standard English’). Broadhead states that ‘the emergence of the concept of Scottish Standard English has required that Burns critics discard the old binary distinction between Scots and Standard English and attend instead to the complex gradations that lie between the two’ (9). The fruits of such an approach reveal that ‘Robert Burns was as much a child of Anglicization as an heir of the vernacular revival’ (20).

Broadhead argues persuasively that we need to discard the old binaries between Scots and English in order to appreciate how both registers enriched Burns’s language use: ‘[Burns] ignored the imperative to respect the difference between linguistic varieties and instead revelled in creating new fusions of existing linguistic varieties, though the development of mixed codes and calques’ (158). These ‘new fusions’ created by Burns’s language usage are fully examined in this book, which offers many intriguing interpretations of canonical and unfamiliar works. For instance, in his discussion of the poems in chapter 1, Broadhead asserts that ‘Broad Scots […] is not simply the vehicle for low and unserious topics, but rather a medium through which the relationship between high and low might be reconsidered’ (25). Examining the well-known ‘The Vision’ as well as the more obscure ‘The Vowels’, Broadhead focuses on ‘the communicative possibilities of bilingualism and code-switching’ (29), in which Scots usage might be seen to imperil ideological distinctions between ‘high’ and ‘low’ subjects. He even suggests that ‘Burns sought to carve a space for Scots in his poetry in which it could be conceptualized without reference to English’ (71), although evidence for this is rather scanty in Burns’s body of work (for example, only one letter written wholly in Scots survives in the poet’s writings). For Burns it seems that Scots was always spoken or written in close proximity to English, whether Scottish Standard or Standard alone; this factor greatly influenced how Burns understood and deployed Scots throughout his body of work.

That said, Broadhead presents a convincing argument that ‘language, for Burns, held out to its users the means to escape restrictive and deadening ways of thinking’ (34). Burns was able to achieve such results by frequent recourse to logical and syntactical disjunctions, which force readers to acknowledge glaring (and often malignant) inconsistencies in the thinking of powerful authority figures (re: ‘Holy Willie’). However, Burns did not utilize such strategies in his verse alone; in the second chapter, Broadhead contends that Burns’s ‘metalanguage’ employed similar techniques to create or foster new ways of thinking. Broadhead admits that ‘Burns’s metalanguage bears the imprint of educational materials to which many learners of similar social status would have been exposed in the eighteenth century’ (51), but he presents a strong argument for Burns’s distinctiveness in these genres (especially in his analysis of the poet’s well-known prefaces to the 1786 Kilmarnock and 1787 Edinburgh editions). By contextualizing and analyzing Burns’s metalanguage (particularly the copious paratexts) in relation to guiding norms, Broadhead alerts us to key linguistic practices in Burns’ writings that cohere (as well as depart) from those norms.

In similar fashion, Broadhead examines the poet’s use of ‘linguistic stereotypes’ in chapter 3, which he suggests were ‘a force not for misrepresentation or oversimplification, but rather creative reinvention and complex identity performance’ (119). This chapter offers a broad overview of such stereotypes (defined as ‘words, grammatical forms, and pronunciations that can be employed to invoke places, groups, and the ways of talking associated with both’ [119]) in eighteenth-century Scottish culture, with close attention to the enduring ‘stage Scot’ stereotype. Burns both employed and subverted such stereotypes, leading Broadhead to assert that ‘Burns’s use of linguistic stereotypes in his songs was one of the building blocks on which the nineteenth-century construction of Scots as a national language was built’ (33). Assessing the value of such usage, Broadhead argues that ‘linguistic stereotypes enabled Burns to project the persona of a ‘parochial’ speaker or bard, and to reconfigure continually the relationship between the local and the national’ (121). Through such linguistic practices, Burns challenges readers’ assumptions and values, as well as their abilities to interpret and comprehend multilingual poetic strategies to represent the self and the nation. As Broadhead observes, ‘when Burns alternates between or juxtaposes linguistic varieties, he demands an act of creativity from his readers, not an automatic ideological reflex’ (148).

The focus on the reader’s engagement with the text is one of this book’s core strengths, for it provides a fully-theorized and demonstrable way of reading Burns’s body of writing that accounts for its linguistic complexity. The final chapters on “transmugrifications” and code-switching also provide equally captivating assessments of Burns’s language use, especially concerning Burns’s linguistic influence on the next generation of English and Scottish poets. Indeed, Broadhead claims that ‘the implications of Burns’s experiments with code-switching prefigured Wordsworth’s and Shelley’s radical revaluation of the role of poetic language in the history of consciousness’ (171). Opening his study to such macro-level concerns allows Broadhead to contextualize and individuate Burns’s language use in a clear and conclusive fashion.

The challenge of reading Burns continues into the present, as new readers are confronted with polysemous writing operating in and through differing linguistic registers. This may be a large part of the poet’s continuing relevance, for Broadhead rightly notes that ‘Burns’s poetry is truly multilingual, comprising different registers of English, Broad Scots, Scottish Standard English, and local dialects of Scots, not to mention words and idioms from French and Latin’ (142). As a whole, the book presents a cohesive argument about the roles and functions of Burns’s multilingualism by using the methods of contemporary sociolinguistics. The Language of Robert Burns seeks to decode the variety and praxis underlying Burns’s multilingualism; in so doing, Broadhead uncovers rich loam beneath a familiar terrain, inviting further study and debate about this vital component of Burns’s poetic legacy.

The Language of Robert Burns: Style, Ideology, and Identity by Alex Broadhead is published by Bucknell University Press, 2013.

Writing in the ‘great shadow’ of Robert Burns proved to be a difficult enterprise for nineteenth-century labouring-class Scottish poets; a wave of tributes and elegies were prompted by Burns’s death in 1796, as his ‘brother’ and ‘sister’ poets confronted his legacy. The critical reception of Burns in the early nineteenth century complicated Burns’s persona as […]