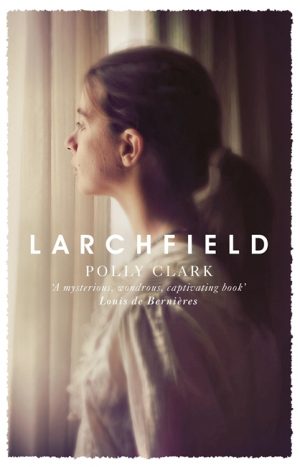 If you believe the statements that attention spans are in terminal decline then it must be more important then ever for a writer to grab readers’ attention from the off, to avoid their eye moving to the next Amazon recommendation or Sunday supplement review as they try to complete the Sisyphean task of keeping up to date with the new. This struck me as I read the early chapters of Polly Clark’s Larchfield. Few novels have an opening as arresting as it has, using imagery and language as visceral as it is unexpected. It’s a novel that, like its two central characters, refuses to be ignored.

Clark takes the two years that the poet W. H. Auden spent teaching at Larchfield Academy in Helensburgh as the basis for her book. There are two stories to be told, at first distinctly individual before beginning to overlap. The first unfolds in the chapters named ‘Wystan’, Auden’s Christian name, and is a fictional account of his life at the school. Leaving the literati of London just at the point he is starting to be known as a poet, he feels compelled to escape due to a mix of controversy and personal crisis; his coming to terms with his sexuality as important a reason as any other. When he arrives to take his role at Larchfield, replacing his friend and fellow poet Cecil Day-Lewis, he finds his reputation has somewhat gone before him.

The other storyline takes place in the present day where a pregnant ‘Dora’ and her husband Kit arrive to start the next chapter of their lives together. Like Wystan, Dora is an academic and poet (or “the poetess”, as she is soon named locally) who has left that life behind for the promise of the perfect place for the perfect family, something which she believes she understands how to achieve. They move into what should be their dream home, but it is one that proves to bring only heartache for Dora.

Both poets find writing in their new location almost impossible. Wystan struggles to accept where he is, and who he is, while Dora is beginning to believe Cyril Connolly’s maxim that “There is no more somber enemy of good art than the pram in the hall”. Connolly was a literary critic who was a close friend of Auden’s, so much so that he penned one of his poems in his honour, “The Fall of Rome (For Cyril Connolly)”. Such literary allusions and connections are throughout the novel, and it is part of the pleasure of reading it to put these pieces together.

Helensburgh, (“the Wimbledon of the north”, according to Cecil Day-Lewis), is portrayed as a town where curtains twitch and ‘outsiders’ are treated with suspicion. Certainly both Wystan and Dora feel that they are unwanted, and not without good reason. While his fellow masters and pupils treat Wystan with suspicion, Dora feels that the whole town is against her from the start. Her neighbours seem to be fundamentalist Christians, and blame her for something that she cannot as yet comprehend. But when even the nurses and midwives take against her, primarily for not being able to ‘breastfeed on demand’, a mantra which takes on increasing menace, it is little wonder that she starts to question that even if she is being paranoid, it doesn’t mean ‘they’ aren’t out to get her.

The psychological versus the supernatural are familiar themes in Scottish writing, but Clark manages to present them anew. Aside from any supernatural reading, which would be more magical-realist mystery rather than Gothic or ghost story, the physical and the psychological are intrinsically linked, the one having a distinct and quite profound effect on the other. Themes of love, longing and loneliness are all central to both stories, but so is the importance of the urge to imagine and create – a reminder that the heart and the head must work together or not work at all – and it is little wonder that the two strands being to intertwine. Polly Clark is a poet of note (her collection 2009 collection Farewell My Lovely is particularly recommended), and her eye for detail and the ability to express the fears, doubts and insecurities that we encounter in our everyday lives will be familiar to those who know her work. But with Larchfield she has written a novel that, while being technically complex and literary, is heartfelt and human without being sentimental. A rare achievement.

Larchfield by Polly Clark is published by Quercus, 2017.