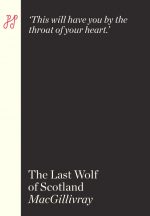 ‘MacGillivray has walked in a straight line with a dead wolf on her shoulders through the back streets of Vegas into the Nevada desert, eaten broken chandelier glass in a derelict East Berlin shopping mall, headbanged in gold medieval stocks in Birmingham allotments, burnt on a sun bed wearing conquistador armour in Edinburgh’s underground city, breast-fed a Highland swan in Oxford and regurgitated red roses in Greenland. She remains the clan chief.’ Your reaction to MacGillivray’s biographical—likely autobiographical—note will probably match your overall opinion of The Last Wolf of Scotland. If the self-mythologising of poets or sun beds that unintentionally wear conquistador armour are not your thing, you may do well to avoid this book, despite its claim on the cover that ‘it will have you by the throat of your heart.’

MacGillivray, a songwriter and performance artist, attempts to ‘dissect the Scottish imaginary’ via poetry that is ostensibly dreamed by a boy called Robert McGee who has been scalped and is bleeding to death in Santa Fe. The year is 1864. Thirteen-year-old McGee’s scalplock speaks to him. The book thus claims to comprise ‘a hallucination in a near-death cinema’. MacGillivray draws upon sources as diverse as the lyrics of Jim Morrison, MacPherson’s Ossian, the recordings of Alan Lomax and other ethnomusicologists, and a rich portion of Scotland’s linguistic spectrum, including Scots, Gaelic, Orcadian and English—not to mention invented words. You can’t fault her ambition or her imagination. Hugh MacDiarmid is an influence, and his gleeful habit of dictionary plundering is evident. MacGillivray often provides a gloss and I learned a few new (to me) words: babbanqua (quaking bog) and gyre-carlin (scarecrow), for example.

I enjoyed the more vivid of these poems, such as ‘Riders on the Storm’, ‘Ghost Dance’ and ‘MacGillebhragh an Duin’—the latter rendered, also, into a fine Gaelic translation by Aonghas MacNeacail. The poems generally attain a certain dynamism—they’re acoustically resonant, sometimes linguistically entertaining, occasionally cinematic—but they want for clarity and many of them simply lack emotional engagement. Here are the opening lines of ‘Body Field’:

Christ, language piths, barked to boat,
lamp-hour operational in you,
the plump-shower swell, re-visioning,
and I can’t shake the body field.

The writer tells us that ‘plump-shower’ is a ‘sudden heavy shower’ and that ‘body fields’ are ‘the sites of forensic experiments to monitor the effects of human decay’ and I can see the word play that is going on in the phrase ‘barked to boat’. I was continually reminded, as I made my way through these poems, of two celebrated phrases: Norman MacCaig’s ‘long haul towards lucidity’ and Ezra Pound’s ‘Go In Fear Of Abstraction’. Clarity and depth are not mutually exclusive; indeed, they can work together very well and much of the greatest poetry seamlessly harmonises both. Some of the poems in The Last Wolf of Scotland are obtuse, affected, inconsequential; they sound good, but they don’t spark into life and meaning and brilliance the way I kept wanting them to. This makes for a frustrating reading experience. The words might work better as song lyrics, perhaps doubly so if those songs sound-tracked a film that captured in visual terms the landscapes and moods hinted at in the collection. As they stand, the poems are a bit of a confusion—at once dense and sketchy, large-themed and narrowly self-involved.

I liked the scale of MacGillivray’s aspirations, the verbal exuberance she sometimes employs, the wide sweeps of history and language and geography she attempts to encompass. Intrigued though I was by the author’s intentions, I have disappointingly many reservations about the collection as a whole. Dreams are by their nature insubstantial yet, if we wish to preserve them, we can give them lasting substance. There is an art to making dreams and ideas clear, substantial and compelling; these poems are just too tenuous, too nebulous, to satisfy. 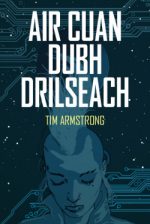 Seattle native Tim Armstrong’s Air Cuan Dubh Drilseach (On a Black Glittering Sea) is a rarity; the Gaelic Science Fiction section of any library would comprise no more than an inch or so of a single shelf. In such a library, Borges would, naturally, be chief librarian and literary mischief-maker, scanning the shelves with hunger, enthusiasm and care. Infinite care.

Air Cuan Dubh Drilseach is not the first of its kind—Iain Crichton Smith’s Iain a-measg nan Reultan (John Among the Stars) was published in 1970, though it was aimed specifically at younger readers. It is claimed that Air Cuan Dubh Drilseach is the first adult science fiction novel in Gaelic but in fact I think Young Adult readers will enjoy it as much as not-so-young adult readers. It is written in a clear, undemanding style that will suit those who like their prose direct and uncluttered. Gaelic learners will learn from it, and likely enjoy doing so.

Ach fuirichibh mionaid/But wait a minute. Just why are there so few Gaelic science fiction novels? After all, Scotland has gifted the infinite library with many fine and keenly imaginative authors whose works include science-fiction—among them, David Lindsay, Naomi Mitchison, the Gàidhealtachd’s own Ken Macleod and his friend, the late Iain Banks who would, I think, have got a kick out of the fact that he was so strongly to influence a work of Gaelic science fiction. A language in danger of dying tends to inspire those who know it to contemplate all sorts of futures. The oral and written literary traditions of the ‘language of Eden’ are vibrant with creative and visionary beings and places. We Gaels have a longstanding relationship with ‘otherness’, with parallel worlds and modes of being; our story itself is traced out upon aural palimpsests. And yet perhaps there are so few Gaelic science fiction novels simply because there are so few Gaelic novels.

Armstrong’s interplanetary romp is rich with ideas and is generally novel without being (too) gimmicky. He engages enthusiastically with elements of traditional English-language Golden Age sci-fi. I found this aspect especially gratifying because speculation about an unreal future took me right back to my actual childhood when I would lose myself in the Space Operas of Robert Heinlein, the mind-bending parables of Ray Bradbury, and the strange, sardonic adventures of Brian Stableford. At the same time, Armstrong is tuned in to the more contemporary sci-fi of cyberpunk, and indeed his political concerns are apparent, and insistent, from the start. The book investigates the dangers that lurk in large-scale capitalism and the exploitation of rapid technological advance, and it does so with the kind of compulsion that speaks of integrity.

The familiar, tired concept of ‘saoghal beag na Gàidhlig‘ (‘the little world of Gaelic’) is thrust aside and we are ushered instead into a great universe of Gaelic; it’s hard not to grin at the subversion and audacity inherent in creating a universe in which Gaelic is the lingua franca. In many ways, the novel is refreshing. It has a playfulness which rarely lapses into outright flippancy. I found the characterisation a little thin at times, but let’s not be churlish. A bold and ambitious Gaelic novel that refuses to engage with self-absorbed, parochial and stagnant attitudes but instead launches itself into wild realms of fancy with insouciance and gusto must be smilingly applauded. In some parallel universe, an impossible Borges is chuckling and muttering to himself in Gaelic about the infinite possibilities of minority languages and the largest of themes: survival. 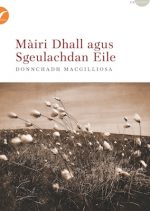 Worlds apart from Tim Armstrong, separated by a common cànan (language), is Donnchadh MacGilliosa, whose first language is Gaelic and whose second collection of short stories is Màiri Dhall agus Sgeulachdan Eile (Blind Mary and Other Stories). MacGilliosa was born in 1941 in the Lewisian township of Ness, which has granted us an inordinate number of talented contemporary authors, including Tormod Caimbeul, Catriona Lexy Chaimbeul and Domhnall S. Moireach.

MacGilliosa’s debut collection, Tocasaid ‘Ain Tuirc, signalled the emergence of a major new voice in Gaelic literature and with the publication of this volume, that voice increases in stature and resonance, for Màiri Dhall agus Sgeuleachdan Eile is a seriously skilful collection of stories and a most significant contribution to the corpus of twenty-first century Gaelic literature

MacGilliosa has his own individual literary voice, but he also animates the deeper voices of a specific community and those, by extension, of a lasting, general humanity. Indeed, some of these stories feed off the fighting tensions between individuals and families or wider, often insular, communities. As such, MacGilliosa is the natural successor to Iain Crichton Smith and Pòl MacAonghais. But these deep, powerful, layered stories also owe something to Chekhov and Chekhov’s ultimate protegé, Carver—at their best, they say so much more than they say.

MacGilliosa engages a beautiful, flowing Gaelic, rich with acoustic and semantic resonance. His stories sometimes startle, in the way Alice Munro’s and Lorries Moore’s do, by departing from straightforward linear narrative and quietly, pleasingly, disorientating the reader until the ending of the story stuns the reader with a new-found appreciation of just what the author was doing—and why. These stories are wide-ranging and entertaining, incorporating a novella (‘The Mobile Gaelic Unit’) and a number of stories just three or four pages long. MacGilliosa writes with empathy, humour and subtle skill. The complex, moving bonds he creates between people (as in ‘Am Balach ‘s a Sheamhair’) or between people and animals (‘Towser’) draw the reader in to an emotional world that feels fully realised and wholly authentic. He is a truly talented writer. Minority languages need major works of contemporary literature to help sustain them. Màiri Dhall is Sgeulachdan Eile is a book that will last—a thoroughly enjoyable, as well as an important, read.