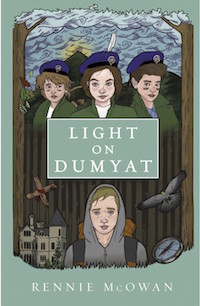 “This book was very enjoyable in many ways to read because it really gripped you in and made you want to read more of it. My favourite part was when the clan and Gavin started a competition so Gavin can join the clan. Overall it was definitely one of the best books I’ve read.”

— Harry, aged 11, not an enthusiastic reader up to now.

(Harry’s Dad says: “Harry never reads books but Light on Dumyat was a revelation to him.”)

What makes a children’s classic? Some favourite ingredients are children having to cope on their own or in challenging circumstances with only one parent, such as The Children of the New Forest and The Railway Children. We Didn’t Mean to Go to Sea sees children unwittingly sailing across the North Sea. Treasure Island is about a child transported to the Caribbean and captured by pirates. Such tales, perhaps counter-intuitively, foster a sense of security in young readers. What if … my parents died? I was captured by pirates? I was on a sailing boat that crossed the North Sea by accident in a fog? I was staying with relatives at a house that was subject to a violent attempt at burglary? My Dad was sent to prison? To which these children’s classics give the reassuring answer: all will be well in the end.

Not all children’s books are for the squeamish. When my sister and I were aged six or seven, in the 1950s, our father read us as a bedtime story the unforgettable The Coral Island by R. M. Ballantyne, which includes the launching of a war canoe over live captives, whose eyeballs pop out.

Light on Dumyat (pronounced Dum-eye-at), re-issued by Rowan Tree in a new paperback edition in November 2016, has deservedly found a place in the canon of children’s classics. The ingredients are a fast-moving but atmospheric story about Gavin, an English boy aged around ten or eleven, having to spend his holidays unexpectedly at the last minute with an aunt and uncle in Scotland. He is already interested in bird-watching and rambling in woods, and soon meets three children, two brothers and a sister of about his age, and with similar interests. As Harry, the young reviewer above, explains, they set Gavin the challenge of becoming a member of their gang via an initiation trial, and in the process the four children together foil an attempted robbery at Gavin’s aunt and uncle’s house.

Light on Dumyat is full of useful tips about bushcraft, and wildlife in the lowlands of Scotland. The setting is middle‐ to upper-middle class — the adult characters are by implication businesspeople and academics who own a house with a tower. The authority figures in the background, the police, are efficient and reliable. I see no harm in this arguably rather escapist setting. Why should children be exposed exclusively to the grey areas and dismal realities of the world?

Lastly: there is a sub-text discernible to the English reader, namely the sense that Scots — including of the upper middle class who feature in the story — are a different ‘gang’ from their neighbours to the south. The Scottish children in the story wear tartan and identify strongly with Scottish weaponry and tradition. Nevertheless they accept Gavin, the English boy, once he shows himself to be as brave and resourceful as his Scottish hosts.

Light on Dumyat by Rennie McOwan is published by Rowan Tree Publishing in a new edition, 2016.