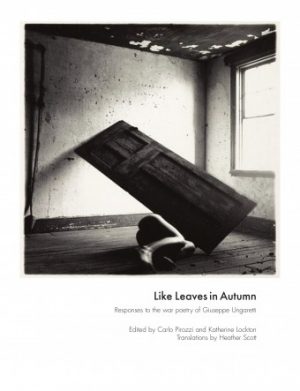 As anyone who has ever tried to write a sonnet knows, it’s not an easy task to follow Italian form in English-language poetry: all those chiming ‘o’s and ‘i’s and ‘a’s that please the ear with their grace and fluency can turn out awfully clunky in uninflected English. Translating, or finding suitable English equivalents for the elusive modernist poetry of Giuseppe Ungaretti, is perhaps doubly difficult.

Like many Symbolist-influenced poets of his time, Ungaretti responded to the magnitude and sheer overwhelmingness of the First World War by producing a poetry that was almost defensively oblique and self-contained. If it was blustering public rhetoric and assertive posturing that got the politicians into the war, the response of the poetic tribe to which Ungaretti belonged (which included Guillaume Apollinaire, Blaise Cendrars, Ezra Pound, T.E. Hulme, H.D., and even eventually Rudyard Kipling) seemed a poetry of numbed concision — images isolated from their contexts and cut into short lines on the blank spaces of the page, resonating like nouns on a gravestone. Alan Gillis puts it very well here when he describes the blankness and the awful silence surrounding Ungaretti’s poems as having ‘the quality of an aftermath’.

So it was wise of the editors of this volume, Carlo Pirozzi and Katherine Lockton, not simply to translate the work of Ungaretti directly for the contemporary reader but to curate a collage of poetic responses, commissioning single poems with accompanying commentaries from an impressive range of contemporary Scottish poets. Each of the Ungaretti poems comes with an elegant literal translation by Heather Scott, a poetic response and commentary, and an image selected from the ARTIST ROOMS collection owned jointly by the Tate and the National Galleries of Scotland. The aim is mixed-media dialogue in which verbal and visual images bang into and bounce off one another in attempts to exemplify the suggestive indeterminacy of Ungaretti’s poetry. The result is a collection that is pleasingly various: some writers choosing to pay close attention to the original Ungaretti, striving to capture its particular feel or riffing off its imagery; others using the poem as a launch pad for their own explorations of analogous themes. One is tempted to risk an all-too current analogy here in suggesting that the book embodies a Corbynesque sense that collective strength comes not from unity but from diversity.

At times this freedom to diverge leads to some rather baffling correlations. It’s difficult to see, for example, what Robert Mapplethorpe’s photograph of a young Iggy Pop has to say to the delicately tentative affirmation of Italian nationhood, ‘Italia’, which faces it across the page — a dissonance that it perhaps shares with a number of the visual images reproduced here. But, in many instances the creative tension between original utterance and modern response is thought-provoking, and sometimes even reverential in ways that mere homage could never be. In ‘Fresh Fountains’ Valerie Gillies runs counter to Ungaretti’s typical practice of leaving his images isolated and underdetermined by creating a verbal and visual symmetry between the images of the cupped hands of her speaker’s grandfather scooping up a gowpen of water, and the indented ‘silver well’ of his bullet scar. The deeper correspondences between her poem and Ungaretti’s ‘I fiumi’, however, come in the way she reworks the original poem’s meditations on the spiritual resonance of water: for Ungaretti, immersion in the River Isonzo allows his speaker to remember other rivers and recognize himself as ‘a tender fibre / of the universe’ but also, more discordantly, as ‘a corolla / of darkness’; for Gillies the river is equally resonant, if more meliorative – its flow connecting her speaker back to her grandfather, and through him to the experiences of that generation of ‘men gone / ever since the war’.

It is difficult to respond to an Ungaretti poem in fewer words than the original, which means that most of the poets here who respond by using a kind of magnification principle. Alan Gillis does this in a literal way by taking the phrases of Ungaretti’s short ‘Nasce forse’ as the beginning and end of each of the four stanzas of his response; Jillian Fenn explodes the delicate ‘Fratelli’, in which Ungaretti describes ‘Brothers’ as ‘A word / trembling in the night’, into a brutal list poem in which statements of power and gender relations follow one another in a long paratactic procession. John Burnside pushes this principle to an audacious but well-judged limit in his response to Ungaretti’s most concise poem, the two-line ‘Mattina’, which Heather Scott translates as ‘I am illumined / with immensity’. Burnside’s ‘D’immenso’, a poem on animal slaughter, is both witty and impassioned in making a deliberately excessive response: a response that is overloaded with quotations from the OED, Luke’s Gospel, Arnold’s ‘Dover Beach’, Emmanuel Levinas, and which even cheekily incorporates almost all of another Ungaretti poem, ‘Soldati’, in order to convey the immensity of his speaker’s outrage at killing in all its forms.

All of this makes for a richly suggestive collection, although it is one that doesn’t always tell us a great deal about Ungaretti’s poetry or entrench us deeply in the ideas that fortify it. Katherine Lockton suggests in her introduction that the anthology ‘seeks to highlight why Ungaretti’s work is still relevant today and how it resonates with Scottish sentiment, especially Scottish feeling against the recent wars’. This is laudable, but if it were indeed the whole case, the result would be a worthwhile but rather flat and predictable anthology. For what is potentially most interesting about Ungaretti, and most productive for our understanding of the complexity of war writing more generally, is not so much his anti-war feelings as a profound and nuanced ambiguity in his attitude to the conflict.

Ungaretti was no straight-up-and-down empathetic everyman feeling deeply the horrors of war and expressing its pity on our behalf. He entered the war, like many Italians, on a wave of irredentist enthusiasm for a project that in the eyes of many patriots would complete the Risorgimento and gather in to Italy those parts of the Austro-Hungarian empire they believed to be rightly theirs. His later collaborations with Mussolini suggest that even if the war had shaken this belief it had certainly not shattered it. That’s not to say that Ungaretti was a Filippo Marinetti or Ernst Jünger, hymning the transformative, self-overcoming power of war, but neither was he a Siegfried Sassoon protesting it angrily or a Wilfred Owen overcome with its pathos. In spite of the tender moments of loss and suffering found — often between the lines and at the margins — in his poetry of 1915–18, Ungaretti seems to have survived the war with patriotic spirit largely intact and no fixed commitment to pacifism in pursuit of that patriotism. Having experienced war at first hand he was able to speak, occasionally, of its horrors and, more frequently, of its alienation and anomie, but without ever really losing a sense of its awful beauty and even, at times, its purpose.

For those of us who have, happily, been spared such terrible experience it is an almost unfathomable attitude, and one that many of the contributing poets here struggle with. John Burnside and Richard Price confront in their prose accounts the less palatable side of Ungaretti, in the form of his alleged Fascist sympathies, and find they have to place an explicit ideological distance between themselves and such views, lamenting the lapses in the man while honouring the poetry. Aonghas MacNeacail takes this idea as the whole subject of his poem, cleverly transforming the image of the fasces, the bundle of birch rods around an axe that comprises the symbol of Italian Fascism, into ‘bitter seeds’ that Ungaretti releases through his song into ‘the equality / of words’.

Such distancing is wholly appropriate — it is surely sensible and humane to resist the idea that a war might be either legitimate and purposeful, or a place in which beauty might be found. This is why poets who have experienced war have much more to tell us about such contradictory things than poets who haven’t (perhaps even why we can allow a war veteran such as Hugh MacDiarmid more latitude when he lets himself wander off into the realms of extremist speculation). But it means that we also have to acknowledge the limitedness of our responses — our unwillingness to follow in imagination where others have gone in actuality. This makes for a more humane poetry but a less bold one. We are fortunate to have the work of Ungaretti and all the other poets who have experienced war as examples of grace under pressure and the survival of our finest feelings, but also of the intolerance and wrongheadedness that comes out of conflict. We are, perhaps not properly prepared to address war in contemporary poetry, preferring (I think wisely) to condemn a little more than fully to understand. So it is as well that we have the likes of Ungaretti to remind us that while it may not be possible for current poetry to conceive wholly of war, it remains difficult to imagine a war without the saving graces and sometimes ambiguously heartening responses of poetry.

Like Leaves in Autumn: Responses to the War Poetry of Giuseppe Ungaretti edited by Carlo Pirozzi and Katherine Lockton with translations by Heather Scott is published by Luath Press, 2015.