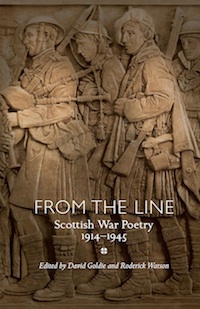 David Cameron, the UK Prime Minister, has allegedly claimed that his favourite poem is Wilfred Owen’s “Dulce et Decorum Est”. In more than one way, this is a very revealing admission. Firstly, any person who claims to have a single favourite poem is clearly not someone who has read much poetry or has any ongoing interest in it. It is the kind of claim that a non-literary politician makes for journalists at a time when there is a current topical concern with the First World War. People who love poetry have many poems in their mind that speak strongly to them in different moods or situations. Secondly, the PM’s claim shows that he is a victim of the educational fashion that has prevailed for too many years, not only in Eton, but in schools all over the British Isles, lamentably including Scotland: namely that hardly any poetry worth studying existed before 1914, and indeed modern poetry was born out of the heads of English soldiers in the trenches of the Western Front. The unending popularity of war poetry, and of three or four officer poets in particular, within the English curriculum in Scottish schools is clear proof of this misconception.

The awareness that there were many good Scottish poets of the First World War has floated around very vaguely for the last thirty or more years. Trevor Royle produced a very fine collection of Scottish poetry and prose, In Flanders Field2, which seems to have disappeared into limbo. The ASLS highlighted Scottish war poetry in a Schools Conference at that time and produced teaching materials for schools, which has been used in some places but by no means widely. So that now, in the centenary year of the beginning of “The Great War”, when a new collection of Scottish poetry of the two World Wars makes a welcome appearance, some of us grizzled walking wounded of the Scottish educational theatre of conflict may be pardoned a slight feeling of déjà vu.

David Goldie and Rory Watson have edited a very readable and wide-ranging collection of Scottish War Poetry 1914-1945. From the Line is an attractive volume, with a striking cover using images from the Scottish National War Memorial Shrine in Edinburgh Castle. It is a tribute to the ASLS that consistently over the years they have published Annual Volumes that are not only valuable additions to the available corpus of Scottish writing but handsome books that are a pleasure to handle.

Within the covers, the editors have given us a wide-ranging selection of poems by writers whose experience of the wars went far beyond the customary major theatres of conflict. In fact, to a degree they have interestingly redefined the concept of war poetry. The well-known names are there, along with many of the expected poems. From the Western Front of the first war, the first-hand combatants’ words of Roderick Watson Kerr, Joseph Lee, Iain Rothach (John Munro) and Charles Hamilton Sorley move the reader again, as do those of perhaps the best of the lost soldier-poets, Ewart Alan MacKintosh (rendered rather too anonymous under his initials, E.A. MacKintosh). From a slightly older generation, writing at a remove from the main front come the major Scots language poets, John Buchan, Charles Murray, Neil Munro (who should really be represented in such a collection by something more from the Bagpipe Ballads than his often condemned “Hey, Jock, are ye glad ye ‘listed?”) and the marvellously eloquent female Doric voices of Marion Angus, Violet Jacob and Mary Symon. Interesting new notes in First World War poetry are struck in the sonnets of Archibald Allan Bowman, bringing in the experience of prisoners of war, the anti-war dissidence of William Cameron and the brief ironic verses of Hamish Mann. Special mention must be made of the Gaelic poets, Domhnall Ruadh Choruna, Murchadh Moireach and Iain Rothach (already referred to), bringing the heroic and celebratory notes of Gaelic poetry into the modern context, brilliantly rendered into English by Ronald Black.

When it comes to the Second World War, the best thing about it (if such a thing can ever be said) may be that, at least in terms of poetry and those writing it, the poets generally survived and the poetry is more varied and versatile. By 1939 the Scottish Renaissance Movement was producing good crops. Many young men and women went into a wider range of war activities with a fuller sense of what poetry (including Scottish poetry) could be and do, and they came through for the most part with a store of experience and a body of existing work that filtered into a post-war commitment and continuing contribution to Scottish writing that has lasted down to the present day.

For many of these Scottish poets, to whom the war was an interlude in a long career, the crucial locations were North Africa and Italy. Not surprising, given the importance of the 51st Highland Division in these campaigns. Edwin Morgan encapsulated it in his sonnet, “North Africa”, from the brilliant Sonnets from Scotland. “Why did the poets come to the desert?” Morgan enumerates them: MacLean, Henderson, Hay, Garioch, Morgan, Fraser. They are all well represented in From the Line, and here we are talking about really major poetry. There are four poems from Sorley MacLean’s great Gaelic sequence, “Blar” (Battlefield), two of Hamish Henderson’s “Elegies for the Dead in Cyrenaica”, plus “The 51st’s Farewell to Sicily”, George Campbell Hay’s “Bisearta” (Bizerta), two poems by Robert Garioch coming out of his POW experience, and a section from Edwin Morgan’s masterpiece, “The New Divan”. Riches indeed. But it does not end there. Sydney Goodsir Smith and Maurice Lindsay at the War Office, J.K. Annand in the Navy, Alexander Scott in the desert and through Europe, J.F. Hendry and Norman Cameron in Intelligence, Hugh MacDiarmid on Clydeside: the sheer variety of war experience lying behind the poems make this collection so far unique. When we add the voices of conscientious objectors like Ruthven Todd and Douglas Young and those of women on the Home Front like Flora Garry, Olive Fraser and Naomi Mitchison, the reference in the title to “The Line” can be seen to have almost global significance. In the Second War, we were all on the Line. This was brought home strongly and personally to this reviewer by the beautiful poem by Myra Schneider, “Drawing a Banana”, a memory of childhood during the war that a lot of us creaking survivors may share.

From the Line will always be a pleasure to revisit. It does, however, present to us at this moment a message in mortality. Reading the biographical notes at the back can bring back so many memories of poets whom one in a sense grew up with, knowing they were still around somewhere and that we were always likely to bump into and exchange a word or two with them, though the war was never going to be on the conversation agenda. Alas, that great Scottish Poetic Division has largely taken its departure from these shores of Scotland, and, in the lambent phrase of Hamish Henderson, ‘A’ the bricht chaulmers are eerie.’3

A final point about ‘War Poetry’. Is it possible to speculate that war poetry as we have come to understand it is a fleeting phenomenon in English and Scottish literary history? Traditionally wars were fought by small armies of professional fighters, hard men employed or levied for their martial qualities rather than for their verbal skills or poetic sensibilities. In a remoter past there were bards who celebrated victories or mourned defeat as a kind of propaganda for the chief or the clan, but in the western world it was probably not until the nineteenth and twentieth centuries, with the raising of large citizen armies from the American Civil War onwards, that there came to be men in uniform required to fight who possessed enough education of the sort that included an awareness of poetry as a suitable medium for the expression of the brutal realities of war and the psychological effects of these on the human participants. So the First and Second World Wars were the most suitable crucibles for the smelting and refining of the kind of war poetry we know. The Spanish Civil War was another such conflict on a lesser but equally traumatising scale. The large-scale United States conflicts of the later twentieth and early twenty-first century have also produced poetry that is less well-known on the European side of the Atlantic. But with the return to small-scale professional high-tech armies, and even units of ‘security consultants’ (mercenaries, in other words), what we would recognise as war poetry may be a less likely by-product.

Where does this leave the Scottish soldier-poet? Probably only in a land of the lost. In the words of Marion Angus, “Tartan plaid and buckled shoon/He’ll come nae mair to oor toon.”4 Perhaps a good thing. The Scottish soldier of fortune will as like as not keep popping up in the army of mercenaries, and his epitaphs will still be written, whether romantically like Housman, or dismissively like MacDiarmid.5 However, we are entitled to hope that, in a different kind of future, Scottish soldiers will no longer be deployed en masse to bleed and die in fremmit lands at the behest of remote politicians and generals with their dubious purposes, and that, ‘on the gathering day, for ever and ever,/MacCrimmon comes no more.’6

From the Line: Scottish War Poetry 1914-1945 edited by David Goldie and Roderick Watson is published by the Association for Scottish Literary Studies, 2014.

As anyone who has ever tried to write a sonnet knows, it’s not an easy task to follow Italian form in English-language poetry: all those chiming ‘o’s and ‘i’s and ‘a’s that please the ear with their grace and fluency can turn out awfully clunky in uninflected English. Translating, or finding suitable English equivalents for […]