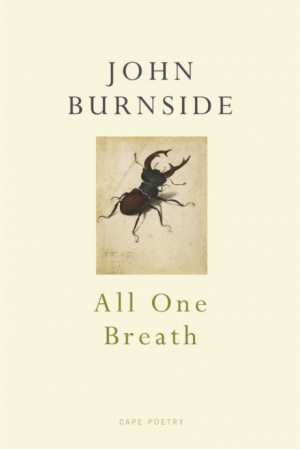 Although it’s wary of systems that display ‘perfect specimens, the finished articles’, All One Breath is a fully realised guidebook to coming of age as an artist. Of course John Burnside’s art has been consummate for a significant time already; this book feels his most explicit yet in letting the reader in and describing how it all works.

Reading one of John Burnside’s poems from earlier collections, for me, feels like this: something very beautiful, elusive and even sinister is glimpsed out of the corner of the eye. The rest of the poem is caught irresistibly out of time, suffused with the longing to find the thing just out of reach. Like every good detective novel, we all sense with the protagonist that discovery would unlock vital secrets, but at the same time it would unravel the mystery and the art beyond repair: we will happily collude to prevent that and keep the beauty intact.

Fleeting presences still escape headlights. Something still inhabits the borderlands between domesticity and wilderness. Serenity is still glimpsed through silence – at dawn, or in the life of an imaginary twin or neighbour, or in the pause after a fresh snowfall. There’s still a promise of cracking a source code or recording, hidden deep in the subconscious,that explains everything. But although the familiar and powerful patterns are still here, they are changed and orchestrated. Discovery, explicitness, specificity, no longer threaten fascination as they used to: instead, they can be a way to realise what is happening and take action before it is too late. The theme of this collection is that of bringing together all the other themes that make the Burnside world, orchestrating them so that we can see the system within, and revealing that the discovery of the artist’s operating system (and even a little forgiveness of it) does not lead to personal or artistic ruin, but the opening of a fresh path:

Late in the day,
but we’re starting to like ourselves

and something feels true
that was always

in doubt
when it counted,

not what we know, but the things
we’ve decided to keep

runs ‘At the Entering of the New Year (Homage to Thomas Hardy)’, picking up an unadorned style from earlier collections, and complementing the baroque flourish of other pieces in the book. It finishes with a list of ways to explain that something – the most essential Burnside word in the Burnside world. The list picks out some of those artistic touchstones which ‘we’ve decided to keep’, realising they are no less filled with potential now that they are out in the open:

a ribbon of wilderness
out on the rim of our days,

the fine-grain of happy, the snowstorms,
the art of fugue,

some thirteen-minute loop
of grainy footage

running, for auld lang’s sine,
at the back of our minds.

Here are rich Burnside ingredients that, this suggests, could always be in the mix: the liminal spaces around boundaries, the snow, the potentially sinister or lifesavingly accurate bearing of witness by some technology that humans have made but do not really understand, the subconscious. There is even the ‘fine-grain of happy’ which sparingly leavens all the collections; and the consciously formal discipline of another art as analogy for the control and surprise of making and writing. It is fugue – the recurrence and competing variations of voices around a theme, the dizzyingly complex build of momentum out of simplicity, and the glorious, spare resolution to the original essentials – that is the defining analogy of the collection. There are, fittingly, four parts to the collection: ‘Self Portrait as Funhouse Mirror’, where mirrors and frames are used as a reflection on legacy and inheritance and what shapes us; ‘Devotio Moderna’, on how easy it is to screw up and not realise that time – for us as individuals, and for the ecologies we rely on – is running out; ‘Life Class’, which studies the fascination of cyclical decay and renewal; and ‘Natural History’, where the four voices of the fugue are gradually brought together, and acknowledge loss and forgiveness.

But where the engine of Burnside poems used to be powered by the ache of glimpsing happiness and being left behind, where they used to long to capture something elusive, now the protagonist is in the thick of the analogies and we are right there with him. Close up, the liminal places are both more mundane and more ecologically fragile: now we’re not just looking on from a distance, but travelling physically through the elusive borderlands, and they’re more vulnerable to time and to human destruction than they’ve ever been before (‘It gets late early out here / in the lacklustre places’, ‘Travelling South, Scotland, 2012’). The allegorical, freeze-frame, temporary purity of snow, which runs through the Burnside world, is more powerful when it is forgivingly revealed as a dream that, for a while, lets us stop time and repossess simplicity – ‘That old cliché – it seemed / that time had stopped’ (‘A Frost Fair’). The point of view is now not from the eyes of the visitor in the art gallery, but right there with the subject of the portrait looking back out of the frame, or the father looking in a mirror and seeing both his own father and his son; three poems are titled in a variant on ‘self portrait’, including the ‘Self Portrait as Amnesiac’ which plays with the idea of retrieving the artist’s former artifice from the attic and acknowledging its beauty and fragility. Above all, there’s realisation that both artist and observer not only have the means to describe and shape their world with their eyes open and using everything at their disposal, but they have the right to do so – and more than that, the urgent responsibility to take action.

And through it all runs not only the recurring themes and images, but some of the little touches of Burnside source code, the DNA in his language. The play between big, American, long-limbed poems that run to the edge of the pages, and simply-shaped things that at first sight might come out of a hymnal. The rhyme that stalks through a poem but might only emerge fully in a final couplet. And the occasional re-emergence of that completely Burnside-y three-fold finish, where a last sentence builds to a climactic point, then resolves into three gently-layered, distinct clauses. It’s this three-fold choral finish that completes not only the last poem in the book, but underlines how an artist can become consciously in control of the many parts of his craft, and gain rather than lose its mystery and power. The poem, ‘Choir’, is about the tacit understanding between himself and the choirmaster of his boyhood, an artist who explicitly and confidently knows and loves the properties of the voices that make his music ‘in the way a herdsman knows his animals’. It ends with a sinuous, developed version of that three-fold finish in the final line. Here’s the final revelation of how familiar voices and memories can satisfyingly and consciously be drawn together by an artist, not losing their power through resolution, but realising a new life to come for his art:

[…] so, though I wanted to, I couldn’t
make it to Our Lady’s on the day
they buried him next to his wife, in the steeltown rain,
to prepare for the Second Coming; and anyway,
despite the years of Kyries and hymns,
I never quite saw the point
of the life to come; back then it seemed
that, like as not, most everything runs on
as choir: all one; the living and the dead:
first catch, then canon; fugal; all one breath.

All One Breath by John Burnside is published by Jonathan Cape, 2014.

Sightlines, Kathleen Jamie’s second collection of essays and pieces about the natural world, came out in April this year. The reviews are already out, and they are—with no surprise at all, given the respect around in general for her poems and prose—the verdict of fully paid-up Jamie enthusiasts. To read is to admire and to […]