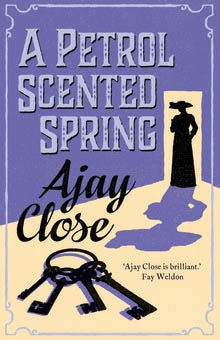 Arabella Scott, a Scottish Suffragette, had been arrested several times for violent demonstrations by 1914, and each time had been released under the Cat and Mouse Act. Aimed at preventing imprisoned Suffragettes from killing themselves on hunger strike, this act stipulated that prisoners would be released once they were too weak to cause trouble. Often the experience would convince women to avoid drawing attention to their activities in future … but not always.

Arrested on a violation of this act in June, Arabella Scott was eventually sent to Perth Prison. There she was force-fed twice-daily for a month, kept in a prone position in solitary confinement, examined daily but never bathed, and refused reading and writing materials as overly stimulating. Her doctor was Hugh Ferguson Watson — in charge of a mental ward, he was accustomed to forcefully feeding patients in his charge, and, unlike other Scottish doctors, he did not balk at applying the same procedure to genteel ladies. A Petrol Scented Spring is based on the complicated relationship that develops between Arabella Scott and Dr Ferguson Watson, and the effect that relationship would have on the doctor’s future wife, Donella.

As Arabella and the doctor spend more and more time in intimate circumstances, barriers and boundaries shift. Although she has no chance of physically resisting the feedings, Arabella can engage him intellectually — their ideals are as different as their social class, and she often succeeds in drawing him out — and it is this aspect of their relationship that draws the doctor to her. Donella, frustrated at her stagnated marriage, says, in retrospect:

I want her to have toyed with him — oh, entirely justifiably, wielding the only power she has left. Dropping confidences like bait: longings, betrayals, small defeats. Encouraging him to reciprocate, drawing him out, every switch from purring intimacy to shrieking insult coldly premeditated. (85)

Donella wonders ‘whether he was done for before we met, whether his heart was already claimed, or smashed’ because after a romantic courtship and happy wedding, he isolates himself from her almost entirely. She knows about Arabella Scott, this other woman in her husband’s life. What else could it possibly be? Donella is heartbroken and desperately lonely, looking forward to chores like replacing worn-out shoes because it will give her an excuse to speak to a saleswoman:

Aunt Nellie says I must get involved with a charitable committee or two. I agree, before changing the subject. How can I enter a room, discuss the welfare of the needy, […] when it’s all I can do not to burst into tears? And sometimes it is fury that keeps out the cold when I’m walking. […] I can’t stand another silent meal. The tick of the clock. The clink of cutlery on plate. The hurricane roar of my own breath in my ears. Is this it, for the next fifty years? (148-9)

There is, of course, much more going on than we suspect at first, and the second half of the novel, which tells the story of Donella and the doctor, is just as exciting as the first. Is someone being held captive here, too? There are some surprises in store for us … and for Donella.

For A Petrol Scented Spring (and her earlier play Cat and Mouse, 2011), Close consulted recorded interviews with Arabella Scott taken by her granddaughter,1 and also consulted Dr Ferguson Watson’s reports on his patient (held in the National Library of Scotland). It is here she found her inspiration:

Reading the medical notes he kept, I noticed a striking difference in tone when he wrote about Arabella Scott. Reporting on the other women, he was coldly factual. With Arabella, he described her moods and emotions. […] When Hugh Ferguson Watson’s relatives showed me photographs of Donella, the woman he married two years later, I could see that she and Arabella were very similar physical types. (‘Q&A with Ajay Close’)

In one of my favourite passages, with the doctor standing by her bedside ready to administer another force-feeding, Arabella grounds herself by thinking about what she has had to struggle against:

Women’s sphere was internal, a space that must remain spotless. Socially, we existed as a stillness: a half-warming, half-blinding glow from our corner of the room. To raise your voice or, heaven forbid, your hand, to throw back your head and show your teeth in a laugh — or even a terrible glimpse of tongue! — to be present as a creature of flesh-and-blood and impulse and error, was to become at once conspicuous and invisible. Outcast. (60)

A Petrol Scented Spring is a fascinating and accomplished novel. The complexity of the relationship between characters is marvellously done. It is superb with period details, and language (early 20th century English slang, and Scots). If you are looking for a novel that brings you into another world and leaves you thinking about it for days after you finish, this is it.

A Petrol Scented Spring by Ajay Close is published by Sandstone Press, 2015.

‘What We Did in the Dark’, by Ajay Close

In a lively account of how she came to write What We Did in the Dark, Ajay Close reflects: Doubtless some writers are extraordinary human beings living extraordinary lives, most are not. However fanatical I may feel about the work of certain writers, I don’t need to know who they slept with. As for novels […]