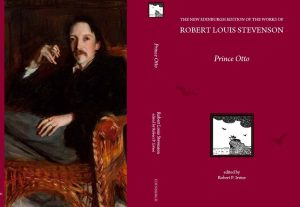 Prince Otto is an interesting (and happy) choice as the first volume to appear in the New Edinburgh Edition of the Works of Robert Louis Stevenson. Everyone will recognise that it is not one of Stevenson’s best known works, but it is a remarkably interesting work and a splendid example of what Stevenson could do even when writing at his ordinary best rather than his very best. As an opening volume it reminds us that there is more to Stevenson than ‘just’ his most famous works. More importantly, perhaps, it reminds us of the extraordinary range and variety of his work. Children’s poetry, young adult fiction, crime fiction, travel writing, historical fiction, memoir, (post)colonial fiction, short story — if Stevenson was not the first to write each of these, he is one of the great innovators in each genre, someone who moved it forward in new and exciting ways, proving himself one of the most versatile and innovative writers of the modern age. But while his contemporaries recognised his brilliance as a writer, his reputation declined quite rapidly after his death, at least in the English-speaking world. Luckily, and none too soon, his star is again on the rise and the New Edinburgh Edition is only one of the many manifestations of recent renewed interest in his work.

Prince Otto is a novel but did not begin life as such. In its first conception it was a play, and underwent various reconceptions until it emerged as a recognisable precursor of Prince Otto when Stevenson told his friend, W.E. Henley, that the planned play was now a ‘story’ which, he suggested, they might later quarry to make a play. The central characters of the novel were already in Stevenson’s mind: Otto and his princess, Seraphina, the devious prime minister Gondremark (who schemes with Seraphina and is falsely alleged to be Seraphina’s lover) and the Countess von Rosen (whose lover he really is). The option of a quarried play was never taken up but the original plan for a play has left its mark on the novel: Prince Otto largely consists of a series of potentially stageable dialogues with suitably theatrical settings. However, a climactic scene in which Seraphina escapes from the palace, wanders through a forest, and, as the day dawns, understands her love for Otto, was unsuitable for stage performance. (That this scene is so novelistic is not surprising, since, as Robert P. Irvine demonstrates in the introduction, it was influenced by George Meredith’s novel, The Ordeal of Richard Feverel.) As finally conceived, Prince Otto could only have been a novel.

However, if it is a novel, what kind of novel? Irvine’s introduction surveys early reviews and, in masterly fashion, allows them to open up all sorts of questions about what exactly the novel is. Is it a comedy, a farce, a romance, a fantasy? In the end it defies pigeonholing into any of these categories which is why Irvine is right in suggesting that it is ‘best understood as an experiment in genre’ (xxiii). All the reviewers had some praise for the novel and there was particular praise for the Countess who is certainly the liveliest and least predictable character in the novel but they all appear to have been puzzled by the work as a whole. One reviewer, evidently unsure how to categorise it, suggested it was ‘on the threshold of Gilbertian comedy’ (quoted xxxi), not an entirely silly comment although it irritated Stevenson considerably.

Irvine’s introduction also explores possible sources and influences for the novel. Once again this raises questions about what the novel is doing and, while it does not define the novel’s genre, it does remind us that Prince Otto belongs to an established tradition of setting stories in imaginary European princely states. Indeed Gerolstein, the name of the state which borders Otto’s principality of Grünewald, derives from Offenbach’s 1867 opera La Grande Duchesse de Gerolstein. Readers will recognise an antecedent to Stevenson’s novel in the Pumpernickel scenes of Thackeray’s Vanity Fair and a successor in Hope’s Prisoner of Zenda and Rupert of Hentzau. Hope’s Ruritania is a setting for adventure but Pumpernickel serves a purpose closer to Stevenson’s by providing a background to Becky’s morally ambiguous dealings.

Stevenson’s consciousness of belonging to this tradition might have contributed to his anxieties about the novel. Could one set a serious novel in an operatic setting? It was one thing to create a pirate’s island but another to concoct an imaginary country with its own history and geography. Comparing himself with Scott, as he so often did, Stevenson would have realised that all the diverse settings of Scott’s novels are of real places and real history. It is perhaps significant that the next time Stevenson wrote about a small country, in A Footnote to History, it was a real country, Samoa, and real history. Whatever the reasons, Stevenson had doubts about the novel, writing to Henley ‘I have no idea whether or not Otto will be good. It is all pitched pretty high and stilted.’ Further evidence of his concern lies in the repeated rewriting undertaken during its composition. One tricky chapter was written eight times by Louis himself and once by Fanny. None of these rewritings survives: the only surviving revisions are those Stevenson made between the publication of the novel in Longman’s Magazine and its appearance in book form. There are changes throughout but the most substantial are at the end, so much so that this New Edinburgh edition includes the original version of the important scene when Otto and Seraphina are reconciled. Once again Irvine deftly uses his discussion of these revisions to open up questions about Stevenson’s intentions and achievements.

Under Stevenson’s concerns about the novel lie, I would suggest, an odd uncertainty: Stevenson seems to have never quite decided whether Otto was a trivial fool or a serious hero — to say he is both is to gloss over a fundamental ambivalence (although ambivalence is often a spur to Stevenson’s imagination — think of Long John Silver, Adam Weir, and Jekyll). From his letters it is clear Stevenson wanted to write a serious novel but wasn’t sure he had a serious hero. In his initial letter to Henley he described Otto him as ‘my poor, clever, feather headed Prince’ (quoted xxiv). In the novel various characters (and once the Prince himself) call him a featherhead, but is this fair? He is certainly capable of generous actions and is redeemed by his love for his wife, but he does not have enough staying power to be an effective ruler and his role as an older man (though not very old) who has lost faith that his young wife still loves him perhaps means, in the tradition of stock stage characters, that he was always going to be a slightly comic figure. In his review of the novel Henley described Otto as ‘histrionic’ (quoted xxxii). Is Otto just a (bad) actor always worried about how he has played his latest scene? A little, perhaps, but not wholly. The novel’s ending, with Otto and Seraphina deposed and penning bad French verse in her father’s court, suggests a triviality of mind from which Otto never quite escapes throughout the novel.

All this might suggest that the modern reader will be as much puzzled about the novel as its original reviewers, but it is much more worth reading than their worries suggest. This is partly due to changes of attitude — today’s readers are unlikely to be concerned by Stevenson’s non-judgmental stance about sex outside marriage — but ultimately the novel is more successful than the reviews suggest. Whether or not he had a serious hero (and serious setting) Stevenson did succeed in writing a serious novel. One reviewer compared Stevenson with Scott, noting Scott’s ‘perfect assimilation of conventional principles’ where Stevenson ‘ventures into a world ignored by Scott, where all is doubt and difficulty’ (quoted p. xxxiii). Stevenson accepted this comment as just but he might have also said that not only his moral universe but also his subject matter belong to ‘a world ignored by Scott’. In the end this is a novel about relationships within marriage, a subject Scott rarely touched on. In particular it explores all those many ways in which communication can break down and relationships founder. Today’s readers are likely to respond favourably to a novel that portrays all the doubts, hesitations and moral ambiguities that can beset a marriage.

The New Edinburgh Edition of the Works of Robert Louis Stevenson is so named because there was an earlier Edinburgh Edition. Before his death Stevenson played some part in the revision of the text but it was ultimately overseen by Sidney Colvin who took a more interventionist approach to the text than either a modern editor or, probably, Stevenson himself might take. The New Edinburgh Edition goes back to the texts as originally published in book form and, by comparing them with other editions from Stevenson’s lifetime and the original manuscript (where it exists — there is none for Prince Otto), carefully corrects them for any errors that might have crept in during the process of composition and printing. This first volume is an exemplar for the whole Edition and it has been carried out in truly exemplary fashion. Most readers will concentrate on the text of the novel itself but all of Robert P. Irvine’s excellent editorial material (Introduction, Note on the Text, Explanatory Notes) is well worth reading for the light it throws on how this fascinating writer came to produce his fascinating books.