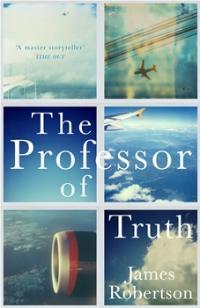 Readers familiar with James Robertson’s work will find The Professor of Truth resonating with the major leitmotifs and themes of his previous novels—(historical) truth and its complex relation with story-telling, (poetic) justice and the role of literature in securing memory and providing a critical review of the past, the healing power of literary representation in the face of unspeakable trauma. Robertson’s privileged genre is the historical novel, and he is certainly a master at it, in terms of sophisticated intertextuality (as in The Testament of Gideon Mack, a meta-Gothic novel haunted with the history of Scottish fiction), of ability to shed new light on obscure and yet pivotal historical events (Scotland’s involvement in Atlantic slavery in Joseph Knight) or to engage with a problematically close past (And the Land Lay Still). Also The Professor of Truth can be described as an historical novel, and as such it engages, in different ways and measure, with the above themes. And yet, this is a novel that in many ways stands out as quite different from Robertson’s previous work, both in terms of approach to the traumatic past event investigated, and of style—here much more introspective and poetic than ever before.

The Professor of Truth provides a fictional re-telling of the complex human, legal and investigative story of the Lockerbie case. Robertson has, however, sought a critical distance from a tragic event, which for many (especially in his home country, Scotland) is indelibly associated with a gross miscarriage of justice and is still at the centre of a tense international debate. The name of Lockerbie never appears in the narrative, and while its main actors are easily identifiable in the novel’s characters, personal and place names and other details have been altered, so as to create an effect of estranging familiarity. This central narrative strategy—the fictional re-placement of the Lockerbie case—recalls a similar strategy introduced by Sir Walter Scott in a novel that dangerously touched upon a close historical period (closer than the ‘sixty years since’ safe distance from the author’s present, prescribed in Waverley). In Redgauntlet, Scott related the story of an historical event that never took place—the plotting of the third Jacobite rising (which, incidentally, some would certainly label as a ‘terrorist’ attack on the British state)—thus shifting the real focus of the narrative from the event itself onto a meta-literary meditation upon the relation between historical truth and literary representation. The novel also reinforces Scott’s central intuition that historical experience can only be properly conveyed through individual lives and perspectives—the Redgauntlet of the title refers ambiguously to the story of an individual, his family history and, by metonymy, the history of his country.

Robertson’s novel, by re-placing the Lockerbie case and by focusing on the solitary and painful struggle of an individual (Alan Tealing, who lost his wife and his daughter in the bombing, twenty-one years before the time of narration) obtains a similar result: readers shift their gaze from the investigation of the terrorist attack, that remains in the background of the novel, to the protagonist’s quest for and meditation on truth and justice. Unlike Joseph Knight, this is not a novel that unearths lost or forgotten historical evidence—Alan’s investigations and encounters, his deconstruction of the lies that have brought to the imprisonment of an innocent man (Abdel Basset al-Megrahi, in the real case), chime with a number of recent and well-known independent investigations, from the ground-breaking Cover-up of Convenience: The Hidden Scandal of Lockerbie (2000)1 to the more recent series of Al-jazeera documentaries,2 as well as with literary representations of the case, such as Des Dillon’s play Lockerbie 103 (2003)3, and only confirm what has indeed become an obvious truth in the hearts of many common people, in disregard of the outcome of the official investigation and trial. The political picture—that of a US-led international conspiracy aimed at withholding the truth behind the Lockerbie bombing—framing Alan’s personal story, will therefore not come as new to most readers.

The withholding of truth is presented in the novel as an evil at least as great as the bombing and subsequent loss of so many lives—as a second terrorist attack in it own right, expanding and prolonging indefinitely the bombing’s outcome of trauma and mourning. If there is no truth, then there can be no justice and no healing. Objective, ‘plain’ truth (a plain answer to the central, plain question: who put the bomb on the plane?) is the only way out of the labyrinth of grief Alan has been trapped into for twenty-one years. If Redgauntlet has been described as an ante-litteram new-historicist novel for its extreme relativisation of historical truth, The Professor of Truth is equally anachronistic in its reminding us—in a postmodern and relativistic age—of the need for closure and authenticity in the face of traumatic events and death: ‘I have an interest in truth—the hoped-for destination at the end of my narrative’, (43) Alan informs us at the very beginning of the novel. He is in fact a Professor of English literature who has largely lost interest in his subject (‘Too many people write books, in my view. Far, far too many people write novels.’ [57]), and has withdrawn into the study of a single obscure writer, David Dibald, who ‘expressed no interest in literary movements or theories, but wrote in a consistently unpretentious style about unremarkable lives’. (57) The search for objective truth starts then with a search for a simple and trustworthy language, beyond that ‘game of words’ which mask lies and omissions:

The game of words—of building, destroying and reconstructing scenarios—that I played inside the snowstorm with Nilsen was a version of the game that had been played all down the years from the moment of the bomb’s explosion: by the police and the intelligence services of several countries, by scientists, security experts, explosives experts, terrorism experts, Middle East experts—experts in everything, some of whom had been summoned eight years before to appear in court as expert witnesses; and by the massed ranks of politicians, lawyers, journalists and judges. You could have filled a sports stadium with the players of the game. (88)

The Professor of Truth is—among many other things—a truly remarkable exploration of how language and ‘truth’ are inextricably bound, and also an attempt at transcending such bond, at reaching beyond language, as it were, in order to grasp truth more firmly. Alan will not be able to discover who planted the bomb that killed his wife and daughter, but confrontation and dialogue with the withholders of truth—Nilsen and Parroulet—will mark a step forward on the path of truth and healing. A turning point in such direction—almost a rebirth—takes place meaningfully in a non-verbal context, at the end of the novel, in the fire that sees Alan and Parroulet fighting for survival, side by side, as an improvised team. As Alan himself, heading home at the end of the ‘ordeal by fire’, movingly records in his very last words:

I’d walk past the roadblocks and the fallen trunks, the wrecked cars and the road signs stripped of their painted words and symbols. I’d be returning from a war. I’d be limping home from the trenches. I’d be coming out of the fiery furnace. I’d be back from the dead, with news. (258)

The Professor of Truth by James Robertson is published by Hamish Hamilton, 2013.

‘To Be Continued …’ by James Robertson

Douglas Findhorn Elder is on the top floor of a bus in Edinburgh when we first meet him; it is four weeks after the Scottish referendum and he has just turned fifty. Douglas is an ex-newspaper man, newly single and in need of an adventure. So far so ordinary: Douglas attends a colleague’s funeral, gets […]

Caribbean-Scottish Relations: for a Poetics of Memory

Talking about a Revolution? The 1968 Italian TV adaptation of Robert Louis Stevenson’s ‘The Black Arrow’

The Corriere della sera anonymous review of the first episode of La freccia nera,⁠ broadcast by state-owned TV RAI (Radiotelevisione Italiana) on the evening of December 22nd 1968, did not brim with enthusiasm. The Black Arrow is certainly not one of Stevenson’s best-known works — the well-read reviewer lamented — beside being too much redolent […]

‘And the Land Lay Still’ by James Robertson

James Robertson’s fourth novel is truly a magnum opus, in ambition as well as execution. It is reminiscent of Salman Rushdie’s great novel, Midnight’s Children, in that both attempt to document the casting off of the British imperial era via fiction, beginning with that key year of 1947, while technically, with so much ground to cover, both […]