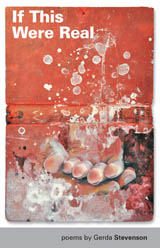 Gerda Stevenson is one of Scotland’s great renaissance women, equally gifted at acting, directing and writing. She has written, adapted and performed in numerous radio plays, as well as writing and directing for the stage, and has starred alongside Mel Gibson in Braveheart. In 2012, her layered, nuanced play Federer Versus Murray enthralled a packed audience off-Broadway.

Stevenson belongs to a family notable for its musical talents (father Ronald Stevenson is a renowned composer, sister Savourna an eminent clàreach player, niece Anna-Wendy a highly regarded fiddler). Her husband is Gaeldom’s most imaginative poet and librettist, Aonghas MacNeacail.

This is Stevenson’s first full-length collection and it arrives with a considerable weight of expectation. Stevenson has been publishing poems occasionally in magazines and newspapers for some years now, impressing readers with her intellectually and emotionally engaging work.

If This Were Real is described as an autobiography in verse and it brings to life a journey that is personal and political, intense and wide-ranging. This is not the kind of autobiographical poetry that is self-involved, self-promoting, self-mythologising – there is far too much empathy here for that; Stevenson’s way is compassionate, defiant and honest. These are poems which offer authentic meanings, connections, ideas. Stevenson writes of gardens and graveyards, epiphanies and Co-op funeral parlours, red cardigans and ‘Sarajevo roses’ (concrete scars on buildings, caused by mortar shells and subsequently filled in with red resin).

Poems of childhood reanimate vivid experiences and people with both power and subtlety. The tones are a shifting, compelling blend of joyous, plaintive, humorous and poignant. Stevenson’s lines are clean, clear, musical. The inherent fallibilities and sad frailties of humankind and nature alike are explored with an edgy panache.

Stevenson’s childhood ‘Eden’ is a very Scottish paradise, one in which a neighbour, with Calvinist zeal, berates the happily playing girls, ‘Get out! / Get out of my garden, / you dirty, dirty girls!’, a cry akin to Alastair Reid’s famous ‘We’ll pay for it!’ Elsewhere, the young Stevenson finds that ‘Snowberries’ leave her ‘thrilled / by death’s proximity’.

The writing throughout is elegantly cadenced, balancing beauty and death, laughter and brutality. ‘Butterflies’ is dedicated to the Bosnian-Canadian poet Goran Simic and begins:

“I can’t write about butterflies,”
laughed the war-torn poet,
corpses hanging from his every line.

The poem ends with Stevenson looking at a newspaper cutting which features a photograph of:

… naked bodies
piled high in a ditch at Belsen,
baking in the noon heat,
birch woods nearby, bright flecks
among the branches that might,
I thought, be butterflies.

There is a melancholy vitality to much of Stevenson’s darker poetry. Time, essential for the life and music that frequently light up the poet’s mind and work, is also responsible for the loss and death that stalk the collection. ‘Last Sunday’, a poem for the late actor Simon Mackenzie is particularly moving (‘in quiet Gaelic tones / you thank me for coming, ask for news / of my family. It seems like a taunt / to say we’re well …’) The very title of ‘Father-minding’ gives the reader a jolt of woe. One of the poems is a wartime skipping rhyme; a number of the pieces unflinchingly examine violent conflict – in Iraq, for example, or in Sarajevo:

where a candle stump
in a father’s fist spits its path
through rubble, and spots
the trail of children’s brains
smeared on schoolbook pages.

The anguish catalysed by illness and war is but one shade of the collection’s broad emotional spectrum. Stevenson’s children and other family members are celebrated in lyrical poems that capture moments of happiness and unbridled love. ‘Child in the Woods’ ends with a life-affirming exultation:

Then, at last, the signal sounds:
your new yellow mouth organ
threads the air in plaintive strains,
your white face rises over the ridge,
small moon cradled in low-slung boughs,
and my love rises at the gift of you.

Stevenson finds, and recreates, a magnificent joy in such scenes, as though they are an antidote to the pains that can otherwise beset a sensitive, intelligent mind. She delights in sharing with the reader the most resonant, spirited and meaningful of experiences. These cool or impassioned, always clear-eyed, poems comfort and disturb, sadden and enlighten; they at once ground and elevate the reader. Though Gerda Stevenson is very much a poet with her own style, If This Were Real put me in mind of Iain Crichton Smith’s A Life, both books being autobiographical collections written by remarkable Scots who have had lives rich in moments of eloquence, insight and empathy.

If This Were Real by Gerda Stevenson is published by Smokestack Books, 2013.