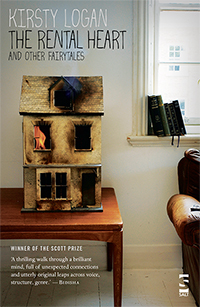 There are few things in this world better than a carefully crafted short story. They never outstay their welcome; simply make their mark and leave you wanting more. They also allow a writer to show a range of styles and touch upon many different themes. Kirsty Logan’s recent collection, The Rental Heart and Other Fairytales, is packed with prime examples of the form; memorable snapshots of lives less ordinary.

Some people may be put off by the use of ‘fairytales’ in the title. Such people should think again as these tales are as far away from children’s stories as is possible; more Pan’s Labyrinth than The Princess and The Pea. Pre-Disneyfication, fairy tales were often gothic, disturbing, violent, psycho-sexual and full of lessons learnt the hard way. Imagine modern versions of Charles Perrault, the Brothers Grimm, Heinrich Hoffman’s Tales of Struwwelpeter, or more recently the fiction of Angela Carter, and you have an idea of where Logan is coming from.

Like the above, Logan’s writing is sensual, subversive and often sinister, and is packed with rich and surprising imagery, more magical surrealism than realism, although that is never too far away. There are matroyshka dolls, mechanical and paper men, clockwork hearts, and children with animal parts. For most of the characters there is always temptation, and many have to choose between heart and head, or at least try to. Love, and lust, are ever present; usually in the shape of longing or loss. Often it is a ‘normal’ life which seems the more fantastical; something which is rumoured to exist but which only happens to other people in other places. Once upon a time, or far, far, away.

But these tales are not pastiche, or an exercise in genre. There is always a lesson to be learned or a moral to the story. While you will encounter mythological witches, graces, questers, Sleeping Beauty, and selection of saints and sinners, this is modern literary fiction at its best, and what unites Logan’s stories is her imagination, which seems fit to burst, and which displays a playfulness that can mask the bitter truths and, often painful, experiences which seem to have inspired the writer in the first place.

From the opening title story, where clockwork tickers prove to be just as unreliable as the real ones, The Rental Heart is a beautifully detailed delight. ‘The Light Eater’, which is a self contained tale only a page long, is a master class in what can be achieved in the short form. ‘The Broken West’ reads like the synopsis of a Gus Van Sant movie, where two young gay men struggle to survive as best they can in Midwest America, and if I read a more ingenious story this year than ‘Coin-Operated Boys’, (as if Alan Moore adapted Hans Christian Andersen), or a more heartbreaking one than ‘Momma Grows A Diamond’, then it will have to be something truly special.

Many of these tales are about a search for meaning and identity; discovering who you are, and who you are not, and the trials and tribulations along the way. Desire regularly sits alongside despair, and Logan’s stories subvert the expectations of the reader as well as play with them, with the results often exquisite, and unexpectedly emotional. The Rental Heart is a collections which stimulates the imagination into viewing things in a more magical and poetic way. Once you finish reading, the world outside is not as it was, and is all the better for it.

The Rental Heart and Other Fairytales by Kirsty Logan is published by Salt Publishing, 2014.

Naomi Mitchison’s ‘We Have Been Warned’ in Post-Referendum Scotland

Over the last few years Glasgow publishers Kennedy and Boyd have been reprinting Naomi Mitchison’s ‘most significant work’ in their Naomi Mitchison Library series, with the help of Professor Isobel Murray as series editor.2 These editions have made previously out-of-print novels and diaries available to the public once again, including Mitchison’s controversial novel of the inter-war period, We […]

If you believe the statements that attention spans are in terminal decline then it must be more important then ever for a writer to grab readers’ attention from the off, to avoid their eye moving to the next Amazon recommendation or Sunday supplement review as they try to complete the Sisyphean task of keeping up […]