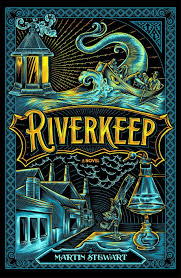 Martin Stewart’s debut novel Riverkeep, a gripping account of a young man’s quest to save his father, draws on several Gothic elements to create a dark and brooding tale that has been compared to the work of Patrick Ness, Philip Pullman, and Ursula Le Guin. Publisher Penguin acquired the manuscript based on a 2000-word short story that went on to become the book’s first chapter. Such publicity might raise the question of whether the final product lives up to the hype surrounding its publication, but it soon becomes apparent that this, just like the river Danék which sustains and drives the plot, is a story with a lot more going on beneath the surface.

The opening of the novel quickly makes it clear why Stewart was offered a book deal based on his short story. We are first introduced to Wull and his father on their nightly patrol down the river. When Wull turns sixteen he will be expected to take on his father’s role as Riverkeep, which involves tending to the river, keeping the lamps lit, and fishing corpses from its depths. It is a laborious and thankless job and, though it has remained in the family for generations, Wull dreads his future and dreams of escaping ‘this wilderness life’.

It is during this eerie night journey along the icy waters of the Danék that Wull’s life changes completely. While retrieving a corpse, Pappa is dragged beneath the waves by a dark creature that inhabits his body. Stewart’s visual and highly-descriptive use of language is shown to its best effect in the moments after the disappearance: ‘It was the cold that brought him back to himself, needling wakefulness into his muscles. For the first time in his life he was aware of the thinness of the planks that separated him from the black void beneath, and he felt the emptiness of the world like a fist in his gut — felt the distance of other people as he never had before’.

That night, Pappa returns to the little house the two share, but he is no longer the same man: ‘It was his papa as he had always known him — heavy with lakoris and slow of movement — but there was something else there now too’. Aided by the tomes maintained by previous Riverkeeps, Wull realises that the only way to save his father is to find a way to banish the dark spirit (the bohdan) that possesses him. When he finds out that a cure may exist in the great sea beast that has been terrorising fishing villages downriver, he embarks on a desperate journey to slay the Mormorach.

Though it is difficult to sustain pace in a novel with such a dramatic opening — which results in a slight lull towards the middle of the book — Stewart’s coming-of-age tale is an accomplished debut with a great deal to offer children and adults alike. Chilling, often gory, and darkly comic in places, it maintains a threatening atmosphere which clearly portrays the dangers of the magical world. Yet the presence of several interesting characters whom Wull meets on his journey also add moments of light-heartedness to the gloom. The stories of Tillinghast (the homunculus pieced together from several human parts), Mix (the stowaway who never eats) and Remedie (the witch who keeps a wooden copy of her dead child with her) introduce several sub-plots, some of which are not fully resolved within the space of the novel and may lend themselves to a sequel.

Although set in a land of sea-beasts and homunculi, at its heart this is a story about coming to terms with responsibility and loss. After the incident, Pappa looks the same but his body is now inhabited by a malicious parasite that does not recognise Wull or remember their past together. At only fifteen years old, Wull is uncertain of his ability to care for his father and carry out the duties expected of him on the river Danék; the central coming-of-age storyline follows his progression from child to Riverkeep.

For the character of Wull, inspiration came from Stewart’s experience of his grandfather’s dementia, and of teaching children who were acting as carers for family members. He writes that: ‘My consciousness was raised to the number of young people who were acting as carers for family members, and the impact that this was having on them. Seeing children coping in school with these invisible challenges with such maturity and strength shocked and inspired me’.1 Wull’s gradual recognition of his own ability to deal with the challenges and responsibilities he faces represents the core of the novel. The heavy and sometimes claustrophobic atmosphere of the book reflects the pressure upon its central character to grow up quickly under extraordinary circumstances, and this is a testament to all children who labour under similar demands.

The role of Riverkeep in the novel is also a tribute to the Glasgow Humane Society which was established in 1790 ‘for the rescue and recovery of drowning persons’. In an interview, George Parsonage, whose father kept the river Clyde before him and who is mentioned in the acknowledgements, states ‘It’s a love/hate relationship. The river can be a wonderful friend, but a cruel, cruel master. You’re fighting against it, and thinking all the time of what it can do to you. You’ve got to give it the greatest respect’.2 In much the same way, the Danék is a central character in the tale; it is a haunting presence winding its way through the book, at once both treacherous and rewarding for those who navigate its waters.

In Riverkeep, Martin Stewart has skilfully created a magical world full of flawed and vibrant characters who are brought to life through their colourful dialects and personalities. It is a gripping, sometimes disturbing, and hugely original read. But though its setting may be fantastic, it addresses issues that are universal. The unlikely band of characters show the lengths that people will go to for the ones they love, as well as exploring what it means to be human. It is a novel that will capture the imagination of younger readers while exploring the very real themes of love, loss, responsibility, and growing up.

Riverkeep by Martin Stewart is published by Penguin, 2016.

‘Miss Blaine’s Prefect and the Golden Samovar’ by Olga Wojtas

Miss Blaine’s Prefect and the Golden Samovar was published to coincide with the centenary of the birth of The Prime of Miss Jean Brodie by Muriel Spark, but don’t let anyone tell Wojtas’ protagonist that! Fifty-something Shona Ferguson is a member of the crème de la crème, as she likes to remind the reader from […]