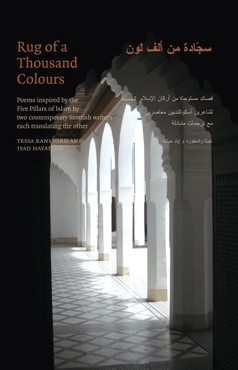 Luckily, the sentiment that poetry is lost in translation is starting to look a bit weak. In fact there is so much to be gained. The co-translations presented in the bi-lingual Rug of a Thousand Colours: Poems inspired by the Five Pillars of Islam by Tessa Ransford and Iyad Hayatleh, is a fine example of this. For the poets, their translation is a matter of dialogue, cooperation and understanding. For David Finkelstein, as he outlines in the book’s foreword, it is a process of ‘reshaping and accommodation […] of transaction and exchange’. And for readers in either English or Arabic, it is clearly also a process of friendship and solidarity.

Both poets discuss in their introduction that it was this sense of mutual respect which drove the project forward. Scottish poet and translator Tessa Ransford first met the Syria-born Palestinian poet Iyad Hayatleh – now exiled in Glasgow – at a translation workshop co-run by Scottish PEN and ‘Artists in Exile, Glasgow’. They decided to work on a larger collaborative project, exploring their various cultural, spiritual and literary backgrounds, which resulted in the writing and translating of a sequence of poems inspired by Islam’s Five Pillars: Shahada (Testimony), Salah (Prayer), Zakat (Almsgiving), Siyam (Fasting) and Hajj (Pilgrimage).

Then, they sat down and talked; Iyad providing the linguistic translations from his Arabic for Tessa to work on, and Tessa providing the cultural and poetic context of her English poems for him to start translating into Arabic. Reshaping. Accommodating. Exchanging. The poems cannot be seen as purely imitations of each other in the corresponding language, indeed the two versions have a life of their own, sometimes with different interpretations of tone, reference or even meaning. The poems gain something new through translation.

Tessa describes her translation experience as that of taking the poem through a ‘turnstile’, bringing it from one cultural and literary context into another. Reading these translations, a different image comes to mind: that of a seesaw. For this project, the act of translation was not a solitary affair, it was a collaboration of two equal parties; a co-translation. The weight of one literary tradition creates movement, and though carved out of the same material, the angle of the poem shifts. As one element is lowered, another may be elevated.

The notion of translation permeates through the entire collection. In fact, it could even be said that the very writing of the poems was an act of translation in itself. Coming from such different cultural and religious backgrounds, each poet ‘translated’ the notion of the Pillar into their own frame of reference, drawing on personal memories, political realities and literary allusions. While Iyad generally interprets them through the framework of Islamic ritual, the Nakba – catastrophe – of Palestine or the life of a two-time refugee, Tessa draws on Biblical references, Chaucer or the life of a woman in Scotland. And so, these poems are as much about any form of spirituality but also about love, anguish and human relationships. In Rug of a Thousand Colours one could easily take religion as a metaphor for life itself.

This is perhaps most clear in Tessa’s poem responses to the Pillars. In her poem ‘Prayer-sequence; she writes:

To pray is to offer ourselves
To accept, be open, listen

Again, in ‘Almsgiving’, she tithes not money but her life itself. Alluding to a quote from Thoreau she writes:

The amount of life I give:
time, thought, intent,
absorbed, devoured
is what it costs

And so too in ‘Fasting’ she considers what it would be to give up not food, but what she feeds on most throughout life:

Much harder for me
to give up working, or caring
to let go my longing to know,
to share, to love

Here is where the seesaw of translation shifts the angle slightly. Whilst in Tessa’s poem fasting would be to give up something precious to her, she notes in her introduction that in Islam the ritual has more positive undertones as it can be a ‘symbol of spiritual hunger for righteousness and justice’.

Iyad’s own response to the Pillar makes this clear when he writes in his poem ‘Siyam (Fasting)’:

for hunger is not the hunger of stomachs;
it is the longing
longing of lovers to be with their beloved;
it is the yearning
yearning of the homeless to return to the land

If Tessa’s poems hold religion as an expression of life, for Iyad religion appears to be an act of bearing witness in a more political vein. For someone who started life as a refugee from his historic homeland of Palestine, only to be exiled anew from his birth-place of Syria, this ‘yearning of the homeless to return to the land’ is fundamental.

This ‘yearning’ for justice can be seen in the references to the Palestinian struggle throughout his poems, the reason for his family’s first displacement. He uses images that have become synonymous with the Palestinian struggle; the ‘prickly pear’ that represents the patience and forbearance of his people for peace; and the weight of ‘those who mounted the steeds of death / long ago’.

But so, too, does he allude to the more recent struggles which he has been affected by, those that started across the Arab World in 2011. When he closes his poem ‘Hajj (Pilgrimage)’ with the lines:

When shall I enter you, Jerusalem, as a free man?
When will destiny answer the voice of the people?

His focal point is not just Palestine, but also the poem ‘The Will to Life’ by the Tunisian poet Abu al-Qasim al-Shabi. Although this poem was written in the 1930s it became one of the ‘anthems’ of Tunisia’s Jasmine Revolution – an inspiring precursor to Syria’s 2011 Uprising – with the line: ‘If, one day, a people desires to live, then fate will answer their call.’ (transl. Elliott Colla)

And yet, although ‘fate’ has perhaps not yet met those desires, there is a sense of hope throughout Iyad’s poems. This hope, it is clear, stems from religion. In his introduction, Iyad explains that ‘nothing calms my anxiety except the presence of the testimony at the beginning and end of the poem’ [‘Fifty’].

Here religion seems to help Iyad translate ‘the struggle’ into something more positive and hopeful. But in these poems poetry, too, stands as a testimony in its own right. In ‘Zakat (Almsgiving)’ he writes:

So Iyad uses both poetry and religion to bear witness to his struggle. The two, in fact, almost feel one and the same within this collection. For English language readers, Iyad’s lyricism and use of religious phrasing – as faithfully translated into the English by Tessa – sometimes reads more like a prayer itself. Paradoxically, these poems about religion explore so much more than just the rituals, and yet Iyad depends on a religious framework to convey his struggle. Whether he is addressing his God or humanity itself, his poems – littered with vocatives – read as a plaintive call for justice. Tessa’s own response to the Pillars beautifully echoes that call, with her grounded, personal lines:

In this way the poem responses stand in solidarity with one another, and speak of a friendship grown through conversation, curiosity and understanding. Religion, too, stands as a symbol of solidarity in this book. The Muslim-Christian interpretations of the Pillars are one thing, but as Professor Emerita Carole Hillenbrand points out in her afterword, ‘the communal nature of prayer, performed in a strictly timed sequence of movements, strengthens feelings of solidarity. They are the same in Glasgow as they are in Jerusalem, Jakarta or Dakar.’

Rug of a Thousand Colours is about much more than just religion, it is also a rich and meaningful exploration of what it is to be religious. It is human and it is raw. And these poems provide vital contemplations and comforts for a world in anguish.

Rug of a Thousand Colours: Poems inspired by the Five Pillars of Islam edited by Tessa Ransford and Iyad Hayatleh is published by Luath Press, 2012.