As one looks through the two Scots versions of ‘Enivrez-vous’, to be found in this slim volume of translations of Baudelaire’s Le Spleen de Paris (1869):

An if frae time tae time, on the steps o a palace, in the green sedge o a sheuch, in the dreich lanesomeness o yer chaumer, yo come tae yersel, … (Walter Perrie, born Quarter, South Lanarkshire)

one realizes that one’s assumptions about language need to be revised. We assume that languages can be circumscribed, if not systematized, that they are accessible to acquisition, that they are constituted by describable linguistic features. In saying these things we have already made three mistakes, and particularly so in relation to Scots. True, Scots is haunted by the temptation of circumscription, of self-consolidation (‘standard’ Scots, ‘ideal’ Scots), but it is a wandering, exploratory language, with an equally multifarious past still to be drawn upon, and a future ever in the process of being made; indeed, it is probably true to say that the development of modern Scots, and particularly of varieties of urban Scots, has not been — cannot be? — kept track of, yet alone acquired. About the Scots poems in Underwoods (1878), for example, Stevenson confesses: ‘[…] I simply wrote my Scots as well as I was able, not caring if it hailed from Lauderdale or Angus, from the Mearns or Galloway; if I had ever heard a good word, I used it without shame’; Liz Lochhead, introducing her 1985 translation of Molière’s Tartuffe (1664), is not embarrassed to admit: ‘Actually, it’s a totally invented and, I hope, theatrical Scots, full of anachronisms, demotic speech from various eras and areas; it’s proverbial, slangy, couthy, clichéd, catch-phrasey and vulgar; it’s based on Byron, Burns, Stanley Holloway, Ogden Nash and George Formby, as well as on the sharp tongue of my granny’. 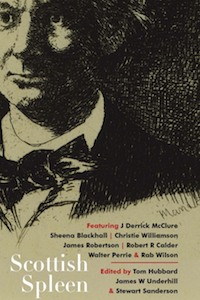 Part of the reason for Scots being a wandering language is the fact that it is pragmatics-generated rather than linguistics-generated, that is to say that it is a language of situations of use rather than simply a language to use; it is a language of shape-shifting, not merely in terms of code- and register-switches, but in terms of lexical and morphological and behavioural need. What do we mean by behaviour here? This question opens on to the third mistake, the mistake which inheres in ‘describable linguistic features’. When we read Scots, we are reading not so much a written language as the transcript of a spoken one (with, of course, hugely varying degrees of transcriptive directness), that is to say a language which will tend to cultivate orthographic inconsistency in order to animate, dramatize, its connections with features of voice (pausing, accentuation, tone, pitch, tempo, amplitude) which written versions will tend to ignore or do scant justice to. An editors’ note tells us that: ‘There has been no attempt to impose a single Scots orthography across the different translations in this volume. Each poem is presented in the translators [sic] own version of Scots’. It is this commitment to orality that gives Scots its peculiar access to the streets of Baudelaire’s Paris, by which I mean, its refusal to let sense and effect be deferred, its commitment to enunciation as an ongoing eventfulness, the solicitation of interlocution, a direct engagement of the speaker’s psychophysiological presence, projected into an urgent here and now.

This already begins to suggest ideas about Scots as a translational language, indeed as a model of a translational language. There is a danger that translation, of all linguistic mechanisms, will draw on the known, the route to consensus, domestication, rational decisions and choices, judgement and approval; but translation is, by virtue of its intercourse with other languages, a coming to knowledge, with language in variational flight, ever to be modulated and pursued. Scots is that volatile and supple medium that can find its way across languages and dialects, and which, through its orthographic adaptability, can map a route to different parts of the world. Scots has nothing to do with a translation that is the best available option, that involves the progressive exclusion of less felicitous alternatives; it is rather a language whose flexibility redistributes cultural values, and which acts outside language-systems, in unmonitored spaces of free intersection, inventive promiscuities, associative hallucination.

More’s the pity then that James Underhill’s introduction should be so largely preoccupied with bestowing a single, self-assertive linguistic identity on Scots and with launching a sustained attack on English as a translational language, with remarks such as: ‘Scots offers us a great chance to get round the pernicious prejudices that tend to pervert Baudelaire translations into English’ (n.p). God forbid that a translation-practice designed to put languages at each other’s throats ever be espoused. And his semi-penitential observation that ‘Scots translations should be for Scots: they shouldn’t be an attack on English’ is equally regrettable; Scots translations should not be just for Scots; translation is precisely a weapon against insularity, the very way we undo the linguistic prejudices adverted to here and liberate languages into each other.

Much better had we heard something of the specific challenges of translating the Baudelaire of the prose poems, and of the translators’ relationships with their own brands of Scots, their ambitions for them, their particular satisfactions, for as the blurb points out: ‘The poems here are offered in the voice of the individual translators, who present their own Baudelairean perspective and version of Scots’. And, after all, Underhill does have fascinating things to say about the texture and tissue of his own Scots: ‘My own versions are refangled in a Scots that’s born of Glasgow and Hawick in the Scottish Borders. But there’s more than a hint of Geordie that comes from my Mam and Dad, from South Shields in Tyneside. That makes my versions a kind of encounter more than a kind of synthetic Scots’. Better, too, if the Baudelairean source texts had been included: the absence of the French text leaves Scots isolated, as if making its case without the support or the consent of the source; whereas, even discounting history, we want to see, on the page, that a language’s forward momentum lies in the complex negotiations of partnership, encounter, dialogue that translation is.

Towards a Post-Colonial Alliance? Some Perspectives on Franco-Scots Poetry Translation

I would like to thank The Bottle Imp for inviting me to reflect on my work as a translator of both French and Scots. In this article — the first I have written on this topic — I outline a few ideas regarding the normative tendency of Franco-Scots interactions and the way to escape it. […]

After first reading through the poems in this remarkable and unique anthology, I was reminded of lines of Emily Dickinson’s: ‘After great pain, a formal feeling comes –/The Nerves sit ceremonious, like Tombs —/ The stiff Heart questions was it He, that bore, /And Yesterday, or Centuries before?’ Dickinson has other lines: ‘The Soul has […]

A Dictionary of the Languages of Scottish Travellers

During the early summer of 2011, while revising the Concise Scots Dictionary, I was searching for a word I knew to be of Traveller origin. I was searching The Scottish Traveller Dialects by Jess Smith and Robert Dawson, an excellent source for words used by Travellers1 — but one which is arranged in the form of informant lists without […]