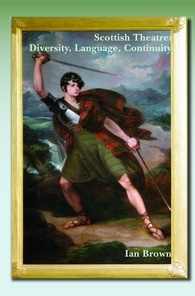 Ian Brown’s monograph follows The Edinburgh Companion to Scottish Drama he edited in 2011, and taken together, these books amount to a thorough and radical rethinking of the traditions of Scottish plays, performances, dramatic and theatrical structures and engagements through history, how we have encountered them, and how we might read them with fresh interest and deeper sympathy and understanding.

The conventional wisdom has been that there are fewer plays of so-called ‘literary’ value in Scottish literature, compared to works of poetry and fiction, and compared to plays in England and other countries. Brown deconstructs this conventional cliché in various subtle and far-reaching ways. The emphasis upon ‘literary’ plays for reading and teaching, and the cultural value placed upon the didactic purpose of such works of writing, is necessarily complemented by an understanding of the value of performance, or performativity—enactments of language in engagements that are inherently dramatic, and that do not depend solely upon the conventions of theatres in cities.

To most students of modern drama, perhaps, the ends of the spectrum might be indicated by Ibsen and Brecht—the former writing to be read as well as performed, the latter writing primarily to be performed as well as read; the latter utilising every possible resource, not only of the performers but also of the conditions of performance—’learning-plays’ for enactment in factories, for example—the former delivering fully psychologised characters, representations of social conditions, gender and class relations as carefully realised as in any novel.

The differences thus delineated are true enough in some respects but the opposition is crude, and in the end, does little justice to either. Brecht’s Galileo is as deeply realised a character as any in Ibsen, and Ibsen’s Peer Gynt is as theatrical, performative and alienating a work as anything Brecht ever wrote. So the dichotomy may be badly misleading if applied as a general rule. Brown begins from a position of long experience in theatre, as a playwright, a performer and a manager and administrative professional. He is also, as his general editorship of the three-volume, massively scholarly Edinburgh History of Scottish Literature clearly shows, fully familiar with the inter-relationships of poetry, fiction and plays—not only as literary genres but as forms of cultural articulation that are inter-connected and have specific contexts in history, geographical location, the language of their writers and audiences, and the whole, massive complexity of what the word ‘theatre’ implies.

Scottish Theatre begins by considering these questions, focusing on the meaning of the words, ‘plays’, ‘drama’ and ‘literature’ and making the crucial opening point that the idea of a single literary tradition cannot do justice to the diversity of languages in which plays have been written in Scotland. This key fact applies to any reading of Scottish literature as a whole but with particular emphasis with reference to drama. Moreover, it is clear that Scottish drama was internationally significant in Latin, in the plays of George Buchanan, as much as in English, in those of J.M. Barrie, but that much Scottish drama performed in Scotland was keyed to popular forms of engagement and vernacular forms of language. In other words, the international provenance of language diversity and the local pleasures of familiarity were concurrent over centuries. Once understood, this perception begins to give weight to the argument for continuity in Scottish theatre and the vitality of the interconnectedness of what might be seen as separate things: ‘literature’ and ‘performance’. Or, quoting the words of Clare Wallace: ‘”a radical and socially committed Scottish theatre” has existed in particular and lively ways over many centuries.’

This argument is developed in the deep thesis of the book—that diversity and hybridity, identities (plural) rather than singular identity in an imperial story, is the key characteristic of Scottish theatre, and that crossing boundaries, rather than observing them, is its main practice. This is seen in The Masque of Alfred (1740) by James Thomson and David Mallet, which concludes with the duet, ‘Rule Britannia’ as Alfred the Great and his wife, Eltruda (anachronistically and metaphorically), celebrate their victory over the Danes. Regional senses of belonging are seen to complement constructions of nationality in ways that resist the imposition of imperial power—and what has happened to ‘Rule Britannia’ since 1740 might be reconsidered in this light.

The language we call Scots has significant bearing here. As opposed to the playtext-centred industries that collate the English language with Shakespeare, Elizabethan and Jacobean drama, and contemporary west-end London productions, the diversity of forms of Scots and indeed the physicality of its utterance, insist upon the bodily enactment of language, rather than its cerebral contemplation. More importantly, these factors insist upon the connections between the bodily and the cerebral. Thus the hegemony of English in language, education and among the political elite, depends upon the pre-eminence of the ascendancy of a single dialect, whereas Scots resides within a variety of spoken and written forms, dramatically contrasted in themselves in various play texts. In some, in fact, these forms are found written along with Gaelic, for audiences who were familiar with all three languages and the slippages and humour that arise in their misapplication.

Having established that a ‘Great Tradition’ approach to Scottish drama won’t be able to do justice to the subject, Brown then launches into the historiography of public performance and uncovers some truly eye-opening data. His discussion of George Buchanan, and the relation between Buchanan’s work and the three areas of Scottish public life that remained the provenance of Scots after the Union of 1707—law, education and religion—is immensely revealing and suggestive. To quote: ‘before, during and after their 1560 Reformation Scots were used to seeing theatre and theatricality as a means of challenging establishment views and exploring social, political and religious change.’

Confronting another conventional wisdom, that the Reformation was inimical to Scottish theatre, Brown observes: ‘In fact, theatre was often more dangerous for writers before the Scottish reformation than after.’ The centrality of performers in the Scottish theatre tradition—as opposed to playwrights—is discussed fully and the significance of this to David Lyndsay’s Ane Satyre of the Thrie Estaites in its various changing forms (first as an ‘Interlude’ before the royal court at Falkland Palace in 1540) is given a full and convincing exposition. Other familiar aspects of Scottish theatre history such as Allan Ramsay’s opening the Carubber Close Theatre in 1736 are considered in new ways. For example, the expense of tickets to some of the more sophisticated theatre performances in Edinburgh at this time is comparable to twenty-first century Covent Garden prices. John Home’s Douglas, produced at the Canongate Theatre on 14 December 1756, exemplifies in some respects the Kirk’s support for, rather than opposition to, theatre in Scotland. This is not an unsophisticated tradition, but rather one that has been undervalued by much twentieth-century literary criticism.

So Brown’s radical reappraisal of Scottish theatre contemplates and probes carefully into questions of diversity and multiple forms of identity, in languages and different methods of acting, and in categories and kinds of public performance. There is an assiduous analysis of eighteenth‐ and nineteenth-century drama and the practice of using the Scots language in plays. The appendix to the book gives the perhaps startling affirmation that plays in which the Scots language is predominant have actually often proven more commercially successful than others. This in itself suggests how badly needed this revaluation of Scottish theatre traditions is.

Brown excels when he comes to the widely-appreciated success of John McGrath and the 7:84 Theatre Company’s 1973 production, The Cheviot, the Stag and the Black, Black Oil and then he takes the story forward chronologically through plays and playwrights from 1970 to 2000 and extensive, immensely valuable appreciation of new translations, new playwrights of the twenty-first century, and the development of the National Theatre of Scotland, with its significant successes and the unanswered questions that still apply to its work.

There are major reappraisals of the individual achievement of plays and playwrights sustained through every chapter of this book, and one of its most important claims is that an enhanced sensitivity to the complexity of the story and respect for its character will help us to understand what it is in a truly comprehensive way. This is to oppose the deeply erroneous notion that after the great Satyre of the sixteenth century, nothing much happened till 1973.

What Brown shows conclusively is that a great amount was happening—linguistically, in kinds of performance both social and theatrical, politically and in terms of religion and in educational institutions—that we have neglected to appreciate.

The richness of the twentieth and twenty-first centuries is sampled fully, therefore, but the whole context Brown provides allows us to relocate that richness in a national and international context. Playwrights such as Ena Lamont Stewart, Robert McLellan, Stewart Conn, Donald Campbell, Bill Bryden, Peter Arnott, Rona Munro, Liz Lochhead, Edwin Morgan, David Greig, and Ian Brown himself, all come to be seen in the light not only of a post-1973 Scottish theatre context but of a Scottish theatre context that stretches back through centuries and, studied carefully, tell us things about all the other forms of Scottish literature, and how taken together they can be appreciated better in terms of the entire cultural production of Europe—if not the whole world.

Scottish Theatre: Diversity, Language, Continuity by Ian Brown is published by Brill as part of the SCROLL series, 2013.

‘The Shard Box’ by Liz Niven

In 1792, four years before the death of Burns, Henry Dundas struck a deal with Lord Macartney and sent him off to lead the first British expedition to China. When they were received into the emperor’s presence almost a year after they set out, King George III’s delegation were treated with cool formality, their gifts—telescopes, […]

It’s a familiar story: the vast popularity of Walter Scott helped promulgate the visualisation of Scotland as Romantic landscape, wild seascape or urban or Gothic cityscape. This process was well underway in paintings of the nineteenth century and the images associated with the country entered popular consciousness often with little regard for the material conditions […]

Robin Fulton Macpherson was known for a long time as Robin Fulton, a poet of chilly distinction in The Spaces Between the Stones (1971), The Man with the Surbahar (1971) and Tree-Lines (1974); as a sharply discerning critic in the book Contemporary Scottish Poetry (1974) and the essays collected in The Way the Words Are […]

‘Collyshangles in the Canopy’ by Ian Brown

Collyshangles in the Canopy is Ian Brown’s collected poetry. Brown is no slouch: a theatre-maker, critic and pedagogue who has contributed greatly to the renaissance of theatre both from and beyond his native Scotland. It is impressive that, among his various literary outputs and professional engagements, he has found the time to create a solid, […]