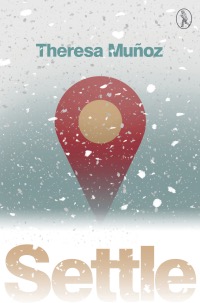 Theresa Muñoz’s Settle is her debut collection, following the publication of the pamphlet Close and inclusion of her poems in several journals. It also shortlisted for the Melita Hume Poetry Prize 2014. Settle is inspired by a significant new chapter in the life of the poet — the change of homeland and re-settlement from her birthplace, Canada, to Scotland. As a woman of Filipino descent, she has a two-fold familiarity with the theme of migration — both first-hand and in a mediated way. Her parents emigrated from the Philipines to Vancouver, and she continued the overseas trajectory and decided to relocate first to Glasgow, and then Edinburgh, and embark on a burgeoning poetic and research career.

The first sequence of the collection, entitled ‘Settle’, traces her transition from being uprooted from her parental home, with its Canadian-Filipino culture, to her adoptive Scottish home and community. The first few poems abound in temporal transformations from linearity to cyclicality as she acknowledges that her parents’ migratory movement is an heirloom of sorts. As she probes their past and follows in their footsteps, repetitions of history create an important vehicle of self-discovery and self-assertion:

Once I heard her say,
twenty-two is the age I left Manila …

left the only patch of land she knew
to wonder as I did, on that cold step:

should I go back, or have I begun again?

[…] because my dad and I were never late,
never slept in.
…
it was our way
back then, to measure our worth.

A striking reconnection of the loss of indigenous roots is found in the poem ‘Home’. Rich in sharp and vivid imagery that plays with light to enhance the atmosphere — ‘Streetlight on the greasy windows’ — it bridges an imagined, second-hand memory of her mother’s home in Manila and a real memory of her Vancouver one. The hopelessness and destitution of the former is driven to its dramatic culmination in the lines: ‘A bus poised for the road / but didn’t go anywhere’. She instils the image with a sense of suspension, curtailed movement that almost feels exhausting. However, thankfully, such lapses into sadness do not comprise the driving force of the poems. The downward movement of such lines as ‘Glided down the escalator at seven am’ is countered by the second stanza’s uplifting, hopeful tone, an ascending movement, and a crescendo of light: ‘my mother’s face lifted/ by the day’s long, long light’.

A good deal of the sequence’s thematic innovation comes to the fore when Muñoz dissects the long and arduous process of becoming a legal UK citizen. This evidently springs not only from her own encounter with its administrative opaqueness, but also from her acute sense of observation and collective plight:

And when the guard says come in
the whole day feels torn from them,

Once she has successfullly navigated the institutional labyrinth, she becomes a cultural and social insider, and then she is able to investigate her own private self and the inner workings of her emotional life. The poems that convey this relief and liberation from the shackles of culture clash are either imbued with a meditative calm or open up to a scope of subject matter that far surpasses that of the first poems. Thus, the rhetorical questioning ‘On Arthur’s Seat’ departs from the top of the famous Edinburgh hill and traverses a far-reaching meditation on human precariousness:

How do I lean into nothing

walk to the cliff edge
and look over without

falling, like on train platforms
how black those ground wires

and how near to the yellow line
should people loiter

Muñoz is at her best when she pierces into such doubts. Although she seems to leave her poem teetering between the fear of losing one’s footing on foreign ground — ‘what’s the rule now / for getting close to danger’ — and the pull to a reckless leap in the dark, the final query, standing alone, ends with an affirmative full-stop rather than a tentative question mark:

what would happen
if I strode along stamped grass

peered over the edge
into emptiness

trusting myself to the town’s tiny lights.

Such an intervention in punctuation, in my view, signifies a choice already made. Indeed, Muñoz’s application of punctuation and orthography are frequently telling of her inner shift from frustration to satisfaction stemming from her integration into the community. For instance, ‘On a Lake’ mirrors this by completely foregoing the use of capitalisation and limiting punctuation to the occasional comma:

being here, under the blurred
bodies of pines

and the curved gloomy edges
of fog, not feeling lonely

If ‘Settle’ portrays the flux of identity as it expands, then the second sequence, ‘Digital Life’ provides ample room for testing the boundaries of identity in a setting that Muñoz, as a member of the Facebook generation, is necessarily accustomed to. In it she registers, in meticulous and colourful detail, the trappings of digital existence and the unique emotions, (rifts in) communication, and (changes in) relationships it engenders. At first glance, it would appear that such a sequence of poems is somewhat out of place alongside the rite of migratory passage of the first sequence, yet the opening poem ‘Trail’ inter-relates the two themes through the same powerful sense of place and movement. The parallel imagery of mapping the city and the body of the lover ‘as a way of tracking your location’ yields a rather unsettling fusion of modern-day intrusive surveillance and romantic passion:

a city map on burgundy cloth

I’d slip it on while you were out:
you’d be the red dot running

down my olive shoulders

In the poems that scrutinise the characteristics of e-mail communication, Googling, and the careful construction of one’s online social persona, Muñoz showcases a witty and pun-laden playfulness, as in ‘How’ (‘how to run a business / how to run long distances’), a parody of the typical spam e-mail contents, as in ‘Junk (‘Your relative of the same name has died. / You are the beneficiary of a heavenly sum.’), and an acknowledgment of laptops as repositories of our lives, deserving of a solemn parting once ‘A film clogs their webcam eye. / Their battery hearts slow.’ Again, she excels when a personal whim opens a pathway towards orchestrating an exploration of a broader existentialist theme. In ‘Googling the Other Theresas’ she tackles Otherness, the layering of identity, and the questionable nature of reality in the digital world, as she envisions her namesakes’ lives as her own alternatives:

If I could be one of them,
I’d paint in watercolours, deserts with low suns
in my life’s last month

or I’d be an athlete, chasing the cork path
my chin level
till I crossed, sweat lacing my neck

However, despite often falling victim to the veneer of reality in social media, she comes to the sobering conclusion that, in the ‘Digital life’, ‘nothing really lives, I know’.

Overall, Settle is a collection that, by addressing issues of home, expatriation, and public and private identity, fills a significant gap in the contemporary British and global poetry scene. It manages to be equally plaintive and playful, curious and endearing, profoundly personal yet sweepingly universal. In tune with the world that has inspired it, for all its anxiety and raw reality, it celebrates life born out of the moments when reality itself is a tentative concept. For this, much gratitude.

Settle by Theresa Muñoz is published by Vagabond Voices, 2016.

As Diana Hendry points out in the introduction to Talking About Lobsters: New Writing Scotland 34, there’s an inherent difficulty in putting together anthologies of this kind. Unthemed beyond the twelve-month cycle, editors are at the mercy of submissions, curating rather than hunting and gathering. ‘I find myself holding my breath,’ Hendry tells us, ‘to […]