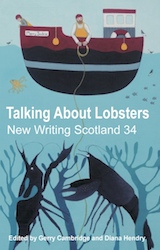 As Diana Hendry points out in the introduction to Talking About Lobsters: New Writing Scotland 34, there’s an inherent difficulty in putting together anthologies of this kind. Unthemed beyond the twelve-month cycle, editors are at the mercy of submissions, curating rather than hunting and gathering. ‘I find myself holding my breath,’ Hendry tells us, ‘to see if […] the zeitgeist of Scotland will be revealed.’ Fortunately this unplanned approach is one of the continuing strengths of NWS, in its dual role of curating and presenting both new and established voices in Scotland, and providing a vivid historical record of the themes and preoccupations of our writers.

It is perhaps no surprise that the overall theme is movement and migration, the hottest of buttons around. For example, Regi Claire’s shifting ventriloquism in ‘As If It Were a Game’ gives literal voice to a disgruntled house packed with noisy people from elsewhere, taking petty revenge on them by draughting doors closed and contemplating plagues of ants, ending on the sinister sentiment, ‘there are all sorts of things you can do to your guests’. The rules of hospitality are suspended and as Scots we need only glance towards Glencoe to see where that can end.

Donald S. Murray’s melancholy pair of poems makes the link between our Celtic past and the modern multicultural British Isles explicit. In ‘Polish Songs Overheard At The Hydro Dam’, it isn’t ballads of ‘boats to Carrickfergus, Stornoway, Ballyjamesduff’ that echo around the hills, but laments on ‘the coldness of that pale sun witnessed in exile’. In ‘Traditions’, a group of ‘migrant workers shuffling across Lincolnshire’ reminds the poet ‘of my people who sailed south for endless hours / to coat their hands in silver’. Fortunes change for nations and we once stood where others now stand, contending with ‘that agony of absence for which glass brings no relief’.

In ‘Crossing the Line’, Uilleam Blacker takes us to the frontline of the immigration debate, the border ‘between the EU and the Rest of the World […] the sacred Schengen zone, whose visas carry you across the continent like a magic carpet’. Our narrator bleakly outlines the reality of existence beyond the moat, the journey down the ‘long corridor between two high fences with barbed wire’ from Ukraine into the promised land. Poland, and the non-border borders beyond offer a better life but at a high cost because, ‘even when you cross the real border, there’s a part of you that’s still on the other side […] you’re split for ever in two’.

It’s not all deportations, isolation and longing, though. Palma McKeown takes a wry look at multiculturalism and mixed heritages in ‘How To Be Scots‐Italian’, where panettone sits alongside Tunnock’s Teacakes and Jimmy Shand and Dean Martin are given equal play time at Hogmanay. Yet even that takes a turn at the end when the nightmare of history once more pulls us under: ‘Try not to get bitter that you never knew / your Italian granddad because during the war / he was taken away by two Scottish policemen’.

Two years on from the Independence Referendum, the zeitgeist demonstrated in this collection is one of Scotland examining its place in the world. Our preoccupations aren’t local, they are global. We are no longer defining ourselves by our history or against our neighbours, rather we are looking at the wider picture and wondering how we fit in. This is part of a larger trend where our writers feel unencumbered by expectations of what Scottish literature is and are taking on new subjects, new voices, new stories.

In a 2015 interview with Alasdair Braidwood for the Scots Whay Hae! podcast, novelist Andrew Raymond Drennan gave voice to a new impatience in Scottish literature:

I was awful tired […] any review I got was always ‘Scottish writer Andrew Raymond Drennan’ [or] ‘A Scottish book by a Scottish writer.’ I don’t know when it happened that Scottish writers weren’t supposed to branch out and do something a little bit bigger […] you know, no one really questioned when Phillip Roth set a book in the Czech Republic and I felt really alienated from the whole scene […] it was total navel-gazing and there was no sense of ambition.

Drennan isn’t alone in thinking that being a writer in Scotland shouldn’t limit you to Scottish subjects, Scottish voices, Scottish stories. I was once told by someone who should really know better that Scottish literature was, ‘working-class literature about working-class Scots’ and by implication anything else didn’t qualify. I was, he told me, writing the wrong kind of stories. But then so was Iain Banks, so I didn’t feel too bad.

Scotland has a long tradition of internationalism and our literature for a long time reflected that, from South Sea Tales to The Mandelbaum Gate. After a period of introspection, that force seems to be returning, with books like Drennan’s stunning The Limits of the World set in North Korea and Jackie Copleton’s examination of the effects of the Nagasaki bombing A Dictionary of Mutual Understanding winning the Richard and Judy Book Club Award. The work in New Writing Scotland 34 fits neatly into that groove: think global, write global. Borders are there to be crossed, and a writer’s duty is to seek out stories and voices that demand to be heard, wherever they originate.

The zeitgeist Diana Hendry seeks in her introduction is perhaps best encapsulated in the final piece in the collection, Mary Wight’s haiku ‘Catching Snow’:

tongue catching snow —
the almost unbearable tenderness
in being met

If New Writing Scotland 34 is any indication, Scotland in 2016 is outward looking, bucking the general trend towards isolationism and parochialism, talking not just about lobsters but about our place in the world and the multitude of voices and stories to be heard not just on the Dundee quays or the back streets of Glasgow, but beyond the fences of Schengen.