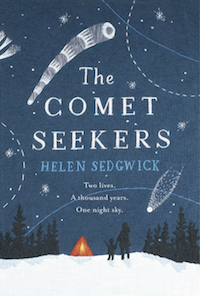 When was the last time you rode a comet?

This question foregrounds Helen Sedgwick’s debut novel The Comet Seekers, and its plot spans a millennium of comets crossing the Earth’s sky. Throughout the novel, as the comets fly by, we come across an array of eccentric characters — Great-Grandpa Paul-François and his daughter Granny, Brigitte who builds the house on the outskirts of Bayeux, Adriane who refuses to speak to her dead brother, and many others whose ghostly existence enlivens the pages. But although this dazzling tale of family and love begins in 1066, when Halley’s Comet makes its way over the heads of Ælfgifu and her soldier boy, the novel begins and ends with Róisín and François in 2017, with Comet Giacobini passing by.

Róisín grows up in a small village in Ireland, looking at the stars, striving to know more about them and the great world out there; beside her, her cousin Liam grows up looking at her, swept along by Róisín’s energy as he tries to ground himself in the land of his family farm. Lovelorn and fundamentally different, the two are trapped between opposite desires to move and to stay put, to love and to be independent. Across the channel, in the small French town of Bayeux, Severine is caught between her wish to travel the world, and her oath to remain and wait for comets, during whose visitations the countless ghosts of her ancestors appear to speak, play, and reminisce with her. Beside Severine, her son François grows up watching a similitude of madness unfolding before him. Mother and son grow closer and move apart, trying to negotiate a space between them where neither has to compromise their truth. Each one of Sedgwick’s characters is meticulously fleshed out — beautiful and flawed, these madwomen and dreamers stare at you from the pages, clamouring to tell their stories, just like Severine’s ghosts.

Sedgwick’s more prominent achievements in this novel are her manoeuvring of time and space, as well as her use of vibrant imagery that allows a millennium to seem as a fleeting moment. The novel hops forward and backward in time, playing with the very concept of temporality, tying together a thousand years’ worth of interpersonal relationships. Sliding sideways between continents within the same time period, the text dismisses the geographical distance between its characters, further emphasising their emotional estrangement from one another. Powerful imagery recurs throughout, presenting a rich thematic landscape that can only be skimmed in such a short review. The portrayal of gold and red colours on fabric, for example, appears and reappears — as the depiction of a comet in the mysterious Bayeux Tapestry; as the dress sent by the lascivious cleric to Ælfgifu’s daughter; as the red tent illuminated by torchlight. The red shawl covering Róisín’s shoulders and the golden one covering Severine’s, as they live completely disparate lives within mere metres of each other, implicate a connection unfelt except by the reader. The red and gold emerge once and again at intersections of great pain and steadfast perseverance, reflecting the red of spilt blood and shamed cheeks just as much as personal strength. Sedgwick inlays her narrative with exquisite little gems, some easily missed upon the first reading, but all parts of a greater roadmap, just like a map of stars and comets.

These comets guide the narrative not only as a form of temporal delineation of the scenes, but also through the thematic implication of their association with the ghosts of the novel. Each time a comet blazes through the sky, the ghosts appear, and this reiterated correlation brings forth a simple notion — the ghosts are as real as the comets and just as dead. Each of the apparitions represents a loss, an imprint of someone’s beloved long gone, just as each of the comets illuminates a departure, an alienation. Loss seems to be a prerequisite of growth in the novel, as each character loses a partner, a parent, a house, a child, a continent. Loss permeates the pages of the book like a bittersweet perfume, showing us again and again the devastating power of human attachment.

And yet, in a fine dissonance, Sedgwick’s portrayed losses are always accompanied by an equal, if not compensational gain: Severine loses her Granny, but gains an extended family centuries old; Ælfgifu loses her soldier boy, but gains her daughter; Great-Grandpa Paul-François loses himself in a war, but gains a family. This centuries-long game of lost-and-found echoes the greatest truth of the human condition — there is nothing permanent, and great pain will be followed by calm, and joy, followed by more pain. Sedgwick explores difficult issues concerning love, family, and loss, but not without providing the hope — carried by a comet bisecting the sky — that one can always cope.

With her upward gaze towards the sky and the ancient stars, Sedgwick nonetheless presents an interesting insight into the earthly soul. As one watches Róisín look up and dream about comets and seeing the world, one cannot help but be reminded of Antoine de Saint-Exupéry’s Little Prince, whose eventual wish was to go home. It begins to appear as though Róisín and all the other colourful characters, so thoroughly affected by faraway stars, are searching for a home.

But it is not the entrapment of four walls that they all strive for, far from it. In The Comet Seekers, those who cling to their brick-and-mortar abodes are destined for disappointment — Liam, with his insistence on saving a failing farm, and the angry Brigitte, who had built the family home brick-by-brick, are for the most part too engrained in their soil to find peace. With her creative alacrity, Sedgwick reshapes the concept of home into something extraordinary, bringing to life the old cliché — Home is Where the Heart Is. The text invites you to follow those who follow their hearts to the farthest corners of the earth — to be as happy as Róisín when she wakes up in strange cities on strange lands, as lively as Severine when she plays hide-and-seek with the dearly departed, and as content as François when he engages in culinary creativity in the kitchen with the one he loves. Each of them is truly home not due to their location, but due to their proximity — to themselves, to their families, to their loved ones.

As with all good books, reading The Comet Seekers is an eye-opening experience urging you to look up into the sky and out of your comfort zone, and seek that which makes you the happiest. It may take you as far as Antarctica or just to your backyard. Regardless, the novel leaves you gazing at the stars and wishes you to be happy, to be kind, and to listen to the voices in your head.

The Comet Seekers by Helen Sedgwick is published by Penguin, 2016.