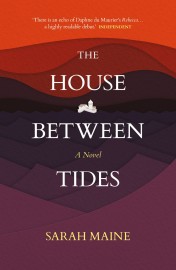 Fiction should not have feminism stamped through it like Edinburgh Rock, nor need every heroine (and I use the word advisedly as opposed to, say, ‘key protagonist’) be the glorious Ifemelu in Chimamanda Ngozi Adichie’s Americanah or even Chris Guthrie — but I would suggest that, at this early stage of the twenty-first century, they be more than sappy, submissive, politically illiterate daft wee lassies.

The House Between Tides is thus an interesting collection of dichotomies. The novel is set on the fictional tidal Muirlan Island off the southern Outer Hebrides, and the story is told by two women, one of whom, Beatrice Blake, is the new mistress of Muirlan House. Beatrice arrives young, naïve, and enthusiastic from Edinburgh in 1910. She is initially impressed by her new surroundings and by her older husband Theo, a painter and wildlife collector, and is open to the unfamiliar experiences that a remote and Spartan lifestyle brings.

Taking a keen interest in the running of the estate, she is appalled at the conditions in which many of the tenants are living, seeing squalor, poverty and malnutrition for the first time. She takes it upon herself to not only provide practical assistance of money and food — in outright defiance of her husband — but to understand the reasons for the destitution she finds around her on the island. Her political awareness is slowly awakened under the guiding hand of local ‘agitator’ Cameron and her allegiance gradually shifts from her capitalist, landowning, bird-shooting husband to this sensitive socialist young man with whom she increasingly has much in common. Female suffrage is discussed intelligently as we watch Beatrice wresting with her own assumptions and challenging those of the men — and women — around her. An astute and self-aware feminist political awakening is gradually drawn with convincing contradictions and historical accuracy.

And then we have Hetty, our character reporting from the early twenty-first century, who appears to have learnt little from the histories of her predecessors, those who made it possible for her to inherit and own property, study, vote or maintain an independent thought in the face of much opposition. Hetty is the great-great-grand-daughter of Theo’s sister and she has inherited Muirlan House. Regrettably, she is also annoying, shallow and ill-informed. And of course she is a fiction, but the contrast with Beatrice, even if intentional, is dismaying. Hetty intends turning her inheritance into a boutique hotel with a golf course, financed by investor bankers. She has decided this all without visiting the place and with the input of her equally vacuous boyfriend Giles. We have lurched, depressingly, into Local Hero territory with a woman who cannot order her own restaurant meal, light a fire or disagree with a motormouth man. Oh dear.

Scotland has a fine pedigree of writing about the unique sceneries within its shores such as Nan Shepherd’s The Living Mountain, wherein one finds: ‘For the most appalling quality of water is its strength. I love its flash and gleam, its music, its pliancy and grace, its slap against my body; but I fear its strength’; Jessie Kesson; Gavin Maxwell, who, whatever his flaws, captured his love of Sandaig near Glenelg in beautiful and spare prose in Ring of Bright Water in 1960; Grassic Gibbon in the Mearns. And Kathleen Jamie must always stop us in our tracks: ‘Here lies our land: every airt / Beneath swift clouds, glad glints of sun, / Belonging to none but itself.’

Sarah Maine — and this is what saves the novel and is the principal skill and delight in this book — also shows that rare gift of finding the words to capture the land, the sea, the skies and the tides. Her descriptions of scenery and wildlife are beautifully evoked and often startling and prevent the book from slipping into the wrong side of clichéd.

Rockpools teeming with life, the machair abundant in tiny flowers clinging fearlessly to the cropped turf, the ever-changing dunes rippling and flowing with the wind, and the constant shifts of light on the ever present sea — all the natural world is captured with beauty and a deft poetic brush stroke. Wildlife, too, is pinned with words, as ‘a flock of choughs rose like dark spirits to fly between them’.

One of the finest passages comes towards the end of the novel in a description of the discovery of some previously missing art work by Theo Blake, Beatrice’s husband. It is hard to depict a fictional painting so that the reader not only sees it but wants to seek it out, yet Maine pulls it off: ‘A pair of birds in flight had become mere wisps […] unerringly depicting wings which flew off into their own dimension, into a grey white oblivion’.

But the land is always peopled by characters who want to make changes, or money, or relationships — and who deserve more than to be cast as cursory Mills and Boons cut-outs with dark hair, angry eyes, and bushy eyebrows on tall well-made handsome men with rugged features. The land and the art shine and shimmer and sing, leaving the characters, with the exception of Beatrice, stranded amidst two-dimensional shadows struggling to escape their stereotypes.

Stylistically, though admittedly this is a matter of taste, there is a tendency to use ellipses and exclamation marks where none should be required: ‘It felt like an escape from something …’ and ‘It was madness!’ Some of the writing has a tendency towards the biblical: ‘and she smelt woodsmoke in the tweed and was comforted’, and just occasionally a metaphor can sound clunky, with ‘steam rising to lose itself amongst countless socks perched like starlings on a drying rail above’.

Critics have likened this novel to du Maurier’s Rebecca (surely based solely on a young wife, an old husband, a mansion by the sea and a housekeeper) but if comparisons must be made then perhaps The House Between Tides more accurately leans towards the novels of Donna Tartt, with half an eye on a screenplay where the land will speak for itself, and the characters, handsome archetypes all, need only speak to move the narrative along. A novel, then, of varied hues — part historical, part thriller and part romance, but with the natural world ultimately winning through — it is one (Hetty aside) which I can happily recommend.

The House Between Tides by Sarah Maine is published by Freight Books, 2016.

‘The Walrus Mutterer’ by Mandy Haggith

For those seeking an answer to the FAQ, “What was it like in the Scottish Iron Age?”, the bad news is that the most definitive “I was there” written account is forever lost, probably around two thousand years ago. On The Ocean – a record of a remarkable journey undertaken by the Greek navigator, geographer […]