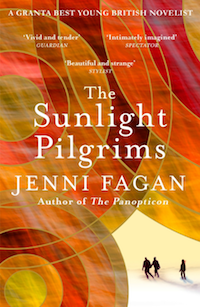 Jenni Fagan’s intensely atmospheric second novel is set in a remote Scottish community in the very near future, covering a period of a few months during which the temperature decreases from –6° to –56°. There is no question that this extreme weather is a deadly threat, but unlike many novels with apocalyptic set-ups, this world is becoming more and not less beautiful. Fagan sets out her stall right at the start; the prologue is a dream-like piece of writing in which the stunning optical illusion of three suns (parhelia) is interpreted in turn by each of the three main characters.

Parhelia occur when the sun is reflected by ice crystals in the atmosphere, creating an optical illusion of two smaller images surrounding the main one, and it cannot be anything other than an arresting image. Historically it has been a harbinger of doom, and here Stella, Constance and Dylan interpret the appearance of the three suns as different aspects of their lives. So perhaps this is a clue that, for all its scientific accuracy (the change to the climate is convincingly ascribed to global warming causing the polar caps to melt and thus divert the gulf stream), this story actually has a lot in common with a novel’s traditional concerns; the relationships between characters take centre stage with the external landscape forming a backdrop to the emotional journeys.

The novel is told from two points of view: initially Dylan’s and then, increasingly, Stella’s. Dylan escapes London after the deaths in quick succession of his grandmother and his mother and the subsequent loss of the family’s art-house cinema in Soho. His mother has bequeathed him the keys to a caravan in Clachan Fells and the novel opens with Dylan’s flight north — a useful way of introducing the community to the reader through his ‘Incomer’s’ eyes. When he arrives he immediately falls for Constance, a woman who ‘polishes the moon’ (while she sleep-walks), and he becomes close to Stella, her adolescent transgender daughter.

It is Stella’s inner life that is the true heart of this novel, as she struggles to make sense of her changing body at the same time as trying to persuade her erstwhile friends and the wider community to accept her for herself. And, fortunately, the majority of the novel is told from Stella’s point of view. She is the most sympathetic and engaging character in the book, and her transformation is beautifully and sensitively rendered by Fagan: ‘Cael Fairbairn has ceased to exist. Thirteen months ago the girl that wore his body got up and told everyone to quit calling her by the wrong pronoun.’

Her mother is aptly named, Constance is Stella’s constant support even when everyone else in the community fails to understand what Stella is experiencing, either ignoring or bullying her.

The impending cold brings this small community together and also fractures it: Stella goes sledging with the other kids even though they’re hardly talking to each other. Stella, Constance and Dylan are forced to take refuge in Stella’s father’s house in spite of the difficult emotional relationships between him and the three of them. These characters are self-defined by strangeness — in the recent past, Constance had two lovers at the same time and made no apology for it; her daughter Stella is transgender; and Dylan is a giant who thinks his father might have been one of the Nephilim, a fallen angel.

Dylan is not in Clachan Fells by accident — his mother chose to buy a caravan in this place for a reason, although it takes him some time to discover it. Now that he is there, he has a chance to exorcise the emotional distance that seemed to exist between him and his mother — if he can fully understand and accept the true extent of his links with this place. Refreshingly, this is not neatly resolved by the end of the novel. As with Stella, we are left with a sense that Dylan’s journey has some way to go.

It was a good choice not to tell any of the story from Constance’s point of view because she appears too well adjusted to be interesting — she has no apparent inner hurt to resolve. She is emotionally attuned to her daughter (it took her just one day to adjust to Stella’s announcement that she was a girl and not a boy) and she seems to function as a symbol of someone with the necessary practical skills to adapt to the increasingly extreme conditions. While the novel details her abilities to adapt to the cold and efforts to teach Dylan how to do so too, it’s also slightly unbelievable that she can earn a living by upcycling junk furniture in such a remote place with only a handful of rather poor inhabitants. Dylan, too, thinks he can support himself by selling his home-made gin. Other practical problems aren’t adequately addressed either: I was left wondering how the characters can access junk furniture or the botanical ingredients for gin, or even wood for fuel, when everything is covered in snow drifts. Only right at the end of the book do the main characters become seriously affected by the extreme cold. The rest of the time, even as the mercury falls, the snow and ice make for not much more than a beautiful backdrop.

Dylan grew up in a London cinema and is accustomed to living in artificial light, so his story is also a growing appreciation of the natural world. From the first time they meet, Dylan is naturally empathetic and in tune with Stella. In a nice contrast, Stella’s obtuse father, who insists on giving her boy’s clothes and can’t bring himself to call her by her female name, is a taxidermist; he creates art from death and his gifts seem designed to take the place of any real emotional exchanges. Sometimes his work can be used to transform living beings (he gives a wolf’s head to Constance, turning her into a shamanistic figure), other times it seems a denial of the reality of death (Stella and Constance have in their caravan ‘a goose head wearing pearls and tortoiseshell specs’).

Other reviewers have compared this novel to Margaret Atwood’s dystopian visions, but in many ways it is quite different to that author’s snappy energetic storylines. Don’t read this book expecting a plot that fully exploits the conflict inherent in the initial set-up, but do read it for the way its writing luxuriates in the details of changing inner emotions and lyrical descriptions of frozen landscape.

The Sunlight Pilgrims by Jenni Fagan is published by Penguin, 2016.

‘There’s a Witch in the Word Machine’ by Jenni Fagan

When the circumstances of its writing and the intent of its author align just so, a poem can reveal the structures, and especially the ironies and artifices, of the historical discourses in which it’s embedded. Jenni Fagan’s second collection, There’s a Witch in the Word Machine, makes no secret of its designs to do the […]

‘Ashland and Vine’ by John Burnside

The narrator of John Burnside’s tenth novel is a young woman with a lot of problems. Kate Lambert is sliding into alcoholism as she grieves for her recently dead father, and the story opens when she happens upon Jean Culver’s house while gathering stories for her boyfriend Laurits’ next film project. Jean makes Kate an […]