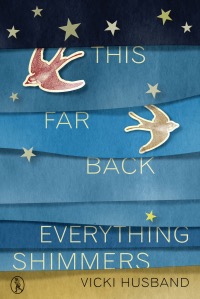 Vicki Husband’s first collection, published by the sharp-eyed, sharp-eared Vagabond Voices, had me entranced from beginning to end of my first reading. Second and third readings followed, and I was delighted to find new gems glowing in all the poems on the re-visiting.

It’s an extraordinary collection, bringing together seemingly disparate themes — space, the universe, relationships and the everyday minutiae — and uniting them in a spirit of exploration, trying always to make sense of the world. Smallness and hugeness go hand in hand, but the strides are never awkward. I am reminded of the poetry I read at University — the Romantics and the Metaphysical poets — but the voice here is absolutely contemporary and startling. And always economical: mind-blowing ideas are treated with depth, respect, humour, sadness, compassion and recognition, all in a few lines.

Of the fifty-three poems in this collection, I can only comment on a few, more’s the pity. They all found their ways under my skin. ‘Extremely Large Telescope’ (which holds the line honoured to be the collection’s title) is a big, meaty poem which puts man in his place. I love the idea of mankind arriving a bit late and missing the best bits of the universe’s ‘show’. We must be earlier, next time, so that we’re not sitting so far back. ‘The man in the corner of Sproul Plaza sold black holes’, built on the unlikely but ultimately plausible idea of selling real estate on the moon and black holes in order to keep one’s kids in shoes, stretched my imagination. Permanently.

A goodly chunk of the poems explore physical decline and loss, sometimes with a detachment that is almost medical, but for that detachment, doubly compassionate. It is these that I find most moving, perhaps as I observe the losses that seem to be gathering like a grotesque party in my own life. How much we miss for the loss of the senses as we age (I thought much, as I read, about my thankfully fit but clearly waning mother, and reached a new understanding). And it’s not just hearing or memory, but the way time collapses. ‘Making sense’ uses form — words scattered on the page — to document physical disintegration. In ‘Australian Sundials’, which shows on the page the shadow cast by the sun as it passes through the day, ‘As your children grow long / and begin to marry / our parents / shorten on the other side of / the globe / unable now / to circle it.’

There’s so much humour in this collection too, though. What do the police horses think as they keep order on a Saturday night in Glasgow? Why did the jellyfish mob the nuclear power station at Torness, shouting ‘from their frilly mouths’ and causing its temporary shutdown?

It is no surprise to hear that Husband has had poems published in the likes of Magma and Gutter, and won awards in the Mslexia Poetry Competition, the Edwin Morgan International Poetry Prize and the Glasgow University Buchan Poetry Prize. More recognition of this impressive poet must surely follow, as will more lip-smacking, soul-searching, expanding poetry.

Finally, a note on the book itself — its physical being. It has a lovely robust feel and weight and the cover design, by Mark Mehan of Red Axe Design, is both simple and striking. All in all, a true pleasure from beautiful cover to beautiful cover.

This Far Back Everything Shimmers by Vicki Husband is published by Vagabond Voices, 2016.

Santiago is Cheryl Follon’s third collection of poetry. It departs from the previous two, in subject range and in the form of the pieces it brings together. And it is a departure, too, in terms of our more usual expectations of poetry. It is a collection that assembles between its covers the immense and the tiny, […]

This pamphlet, Stephanie Green’s second — and now sold out — brings together poems inspired by the landscapes and culture of the Shetland Islands. Islands and the ways of life of their communities fascinate me, as they do many others, and more so as it seems our lives become even busier, even more crowded, even […]