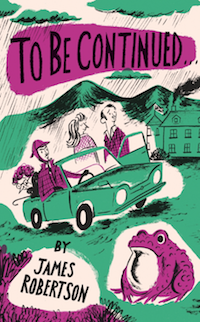 Douglas Findhorn Elder is on the top floor of a bus in Edinburgh when we first meet him; it is four weeks after the Scottish referendum and he has just turned fifty. Douglas is an ex-newspaper man, newly single and in need of an adventure. So far so ordinary: Douglas attends a colleague’s funeral, gets drunk on a mysterious brand of whisky and visits his father in the nursing home. He is musing on aging, convincing no one when he insists: ‘it’s just a number’. He is having a crisis, writing a novel, missing a woman. We could be in David Szalay territory here except that we know there’s going to be a toad because the blurb tells us so. And there, just when it’s needed, it is. Mungo Forth Mungo is straight talking, highly knowledgeable and dismissive about any fear of aging. Toads, he says, don’t count years, only seasons, and he longs for spring. Robertson’s toad descriptions are wonderful: the way Mungo lowers himself into a puddle of wine or lashes out ‘with his considerable tongue along the skirting boards’. Robertson writes that: ‘no creature, of any species, can match a toad when it comes to looking disdainful’ and this is entirely convincing and acutely portrayed.

Douglas and Mungo become friends and — when Douglas is given the task of interviewing an elderly writer and politician named Rosalind — they set off together into the wilds of the Highlands.

To Be Continued … is filled with Chekhov’s guns in various forms and it becomes second nature while reading to assume that where there is a mysterious brand of whisky or a drunken seduction, there will later appear an alluring love interest or an illegal whisky smuggling ring. Because of this the book is easy reading, fast-paced, and entirely alluring. There are some books that worm their way in and To Be Continued … is one of them. Though at times the split structure — moving between toad-conversations, historical biography, and first person — feels like a case of too many chefs, mostly there is something fresh and energetic about the short, snappy sections. The writing too, is dry and engaging; more than that it zings, carries you along in its flow.

To Be Continued … is about the schizophrenia of life and is rife with characters that have split themselves purposefully or have found themselves unintentionally a different person from the one they were before. Elder’s father has Alzheimer’s and ‘never used to use swear words’ or attempt to repair the floorboards; Douglas’s friend Ollie sends off Alsatian poo rather than his own in the bowel cancer test; Douglas has a toad that speaks some of his thoughts. The further we travel north, the more overt these separations are. Douglas meets Corrywreckon whose three separate personalities are so different that he himself has forgotten that he is, in fact, all of them. The novel’s love interest, Poppy, uses a pseudonym when she wants to go walking or visit the pub to drink and find a man.

There is something being said here about the multiple facets of Scottish identity — and about nostalgia — but really what it makes for is good reading as Robertson steers his slightly bumbling character through the mess and out the other side.

Douglas eventually, through much whisky-fuelled misadventure, reaches his destination. There everything gets a little unclear. The conversations with Mungo Forth Mungo continue but the toad has spread his net and now converses with everyone he can get to. No one seems very fazed by this. It is more and more uncertain whether Mungo is Douglas’s alter-ego or actually a talking toad. Robertson has Douglas vehemently insisting he does not know the toad one minute and chatting away merrily the next. The conclusion of this is that some of the sections come across a little forced as Robertson attempts to move between these different possibilities. Equally, though, Douglas wrestles with what to do about Corrywreckon — whose three personalities seem often at odds with one another — and no conclusion is forthcoming.

Unfortunately, while all of Robertson’s characters are merry stereotypes, the women suffer most from this. They are ogled by Douglas who notes everything they are wearing and has a tendency to sexualise them, even if one happens to be his step-daughter. This is a novel in which women are not really round characters — rather, they are waiting wives and mistresses for the lost and wondering men. This is a shame because, while Robertson seems adept at creating characters that are pithy and enjoyable to read about, the women he writes are all either frumpy, maniacally tidy or sexual bait.

There is something interesting being said here about relationships both between people and countries. Though the novel ends with Poppy remembering Molly Bloom and her affirmative Yes, the relationships that are formed in the book all involve a less affirmative, one-sided shedding of any extra personality traits. The weaker partner in more than one relationship in the book is forced, in an almost colonial act, into a mould they would not, alone, have been in.

To Be Continued … is enjoyable. Pages whizz past and, though sizable, it would be easy to read most of the book on a long train journey. Douglas — when not leering at exposed flesh — is a wry, amusing narrator, the toad is a clever addition, and the journey from Edinburgh to the highlands is exciting and compelling. I sped through it in a couple of days and really enjoyed it; however there were things that niggled. There are questions that Robertson himself raises and then leaves unanswered about the identity of Scotland, aging and care homes. This in itself is not an issue — fiction is not journalism — but there is a sense in which the book itself does not believe this and continuously pushes us to find answers which we are not given.

The book reads a little like a comedy set: jokes and word plays are repeated, characters return, Douglas questions himself over and over. There is a sense that we are circling back to something — the problem is that it is uncertain what this point is. Rosalind, when questioned, says: ‘it must be obvious to anyone who knows me.’ But it is not. The book is haunted by issues that are not fully resolved.

The protagonists of Robertson’s novels are often men whose deep-set world views have been challenged and who find themselves adrift and forced to change. This does not happen to Douglas. A little like the plot — though he has the adventure he was looking for — Douglas is stoically still the man he was at the start, albeit with an attractive new girlfriend.

In the final pages Douglas and Poppy are happy — they speak about creating a life together, having children. We suspect, however, that he will make the same mistakes he made before and though this could be described as a character trait, it feels more like a flaw in a novel that also has not quite decided which way to vote.

To Be Continued … by James Robertson is published by Hamish Hamilton, 2016.

‘The Professor of Truth’ by James Robertson

Readers familiar with James Robertson’s work will find The Professor of Truth resonating with the major leitmotifs and themes of his previous novels—(historical) truth and its complex relation with story-telling, (poetic) justice and the role of literature in securing memory and providing a critical review of the past, the healing power of literary representation in […]

‘And the Land Lay Still’ by James Robertson

James Robertson’s fourth novel is truly a magnum opus, in ambition as well as execution. It is reminiscent of Salman Rushdie’s great novel, Midnight’s Children, in that both attempt to document the casting off of the British imperial era via fiction, beginning with that key year of 1947, while technically, with so much ground to cover, both […]