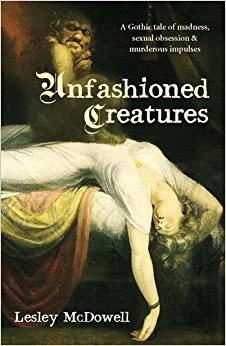 Madness. Ghosts. Desire. The latest novel by Lesley McDowell ticks all the boxes of a good Gothic novel. And as many a good Gothic novel does, it pays homage to its predecessors. The novel’s title is one of the most poignant lines from Mary Shelley’s Frankenstein (1818), where Frankenstein claims that ‘we are unfashioned creatures, but half made up, if one wiser, better, dearer than ourselves – such a friend ought to be – do not lend his aid to perfectionate our weak and faulty natures’. The intertextual link to one of the earliest and most influential Gothic novels echoes many of the important themes McDowell’s complex plot masterfully handles.

Mary Shelley herself is partly the inspiration for the book. Unfashioned Creatures tells the ‘back story’ behind one of Shelley’s letters to Leigh Hunt, where she reveals to have ‘now renewed my acquaintance with the friend of my girlish days’, adding that ‘she has been ill a long time, even disturbed in her reason’. The extract, which forms the epigraph of Unfashioned Creatures, refers to Isabel Baxter, a childhood friend of Mary’s, who, aged eighteen, married her former brother in law, David Booth, thirty years her senior, after her sister’s death. Through Isabel(la) Baxter Booth’s point of view we read of her abusive marriage to David Booth, whose fits of madness cause her physical and emotional damage, and her attempt to find a suitable treatment for him at the Montrose Royale Lunatic Asylum. Alternating Isabella’s first-person narrative is a third-person account following the vicissitudes of Dr Alexander Balfour, an ambitious young doctor, whose scientific fervour is reminiscent of Shelley’s Frankenstein.

The two narratives overlap chronologically throughout the story, and, converge, halfway, when Isabella meets Balfour in Montrose, where they engage in a brief affair. While the reader is aware, having read Balfour’s narrative from the start, that his intentions are far from clear, the liaison echoes Michel Foucault’s understanding of the shifting relationship between psychiatric doctors and their patients: ‘the madman tends to form with the doctor, in an unbroken unity, a “couple” whose complicity dates back to very old links’ (Madness and Civilisation). The relationship is complicated further by the fact that Alexander is informed that Isabella needs treatment for her madness through a letter by her husband, for whom she is, in turn, seeking a cure in Montrose. Additionally, we understand from Balfour’s narrative, that his own life has been disturbed by two sets of family traumas: his brother, Thomas, is also affected by mental health, while Balfour’s youth was affected by an incestuous relationship with his own mother.

Both narratives share unreliable, or, at the very least, unstable narrators/points of view, positioning Unfashioned Creatures within the long-standing Scottish Gothic tradition, which includes, of course James Hogg’s Private Confessions and Memoirs of a Justified Sinner (1824) and Robert Louis Stevenson’s Strange Case of Dr Jekyll and Mr Hyde (1886): the latter is, in fact, directly referenced in Balfour’s postscript to the narrative (though this is presented, in fact, at the beginning of the novel). The demonic duality of Hogg’s text emerges in Isabella’s ambiguous reactions to her husband’s illness; whereas her rational self approaches this as a medical case, her irrational self believes this is a matter of supernatural possession. Like the second wife of Daphne DuMaurier’s Rebecca (1938), Isabella is also haunted by the ghost of her dead sister, whose position, she has, she feels, usurped. While DuMaurier’s narrator remains nameless throughout the novel that bears the name of the first wife, Isabella, in the end, chooses to lose hers, and take on the name of her dead sister, in an attempt to manage her husband’s insanity. Another literary association, through the red-haired woman, Euphemia, who sets fire to her locked room in Montrose, evokes the literary ghost of Bertha Mason, the archetypal mad woman in the attic of Charlotte Brontë’s Jane Eyre (1847).

Isabella’s own madness and her fear that ‘His illness is a catching thing’ (70), can also be read in line with the suggestion, implied in Stevenson’s novella, that Jekyll/Hyde’s insanity is not self-contained, but bleeds in fact into all of the characters. It is this viral quality of madness that deeply interests Balfour: ‘Woman was the civilizing force, it was said, “infecting” the savage male with her sensibility, her domesticity, and so taming him as a result. A poor theory that he’d always sniffed at. His theory would turn that notion on its head’ (174). But Balfour is also conscious that his theory about the infectiousness of insanity might bring home the uncomfortable awareness of his own insanity, or, at the very least, duplicity; after all, in his student days, rumour had it that his doppelganger attended the classes he missed (78).

Haunting the novel is the question of the self, a philosophical investigation that underpins the discourse on madness and its treatment against the background of the medical and ethical debates that run throughout the nineteenth century. ‘Where is the self located? In the mind? The brain? The soul?’ wonders Dr Bulckers in conversation with Balfour. Significantly set in 1823, and despite some of the historical inaccuracies McDowell could not avoid, as she admits in the acknowledgments, for the sake of the plot, the novel well captures the changing attitudes towards the treatment of madness, which was slowly moving away from the superstitions and stigmas attached to mental illness – and the emphasis on restrain and confinement to manage it – to a more scientific approach to the pathologies of the mind based on neuroscience and psychoanalysis. At times it feels as if the novel is racing ahead in time; the relevance of ‘trauma’, which is suggested as a possible cause for madness, is not fully developed until later in the century (OED records the word’s first-time use in psychoanalytical terms in 1894). But most of the time the narrative engagingly deploys the historical context to draw attention to the difficult treatment – and definition – of madness in the nineteenth century. Towards the beginning of the novel, when, overwhelmed by her husband’s madness, Isabella begins to doubt her own sanity, she asks, ‘What makes a monster though?’ (8-9). The issue, of course, bears a direct reference to Shelley’s novel, which would have begun to acquire popularity by 1823, but the reader may well feel that this all important question remains unanswered today.

Unfashioned Creatures by Lesley McDowell is published by Saraband, 2014.