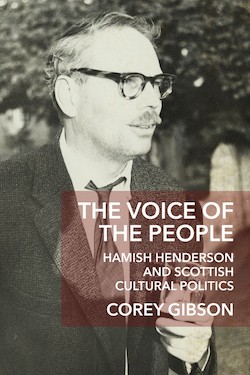 Hamish Henderson (1919-2002) first heard the name of Antonio Gramsci mentioned when he fought alongside the Italian partisans during the liberation of Florence in 1944. The Italian communist would become a major influence on the work of Scotland’s preeminent folklorist, poet, songwriter and political activist of the twentieth century. Not necessarily, or primarily, the Marxist theoretician, but rather the Sardinian soul mate, whose fate in Mussolini’s prisons reminded Henderson of the similar martyrdom of one of his other great heroes, the Glaswegian socialist and home ruler John Maclean. As Corey Gibson points out in the core chapter on ‘Gramsci’s Folklore’ in this study on the work of Henderson, Gramsci’s ‘overarching philosophical concepts’, the buzz-words of Gramsci scholarship — ‘cultural hegemony’, ‘national-popular’ and ‘traditional and organic intellectuals’ — are ‘conspicuous only in their absence’. But Henderson could immediately bond with Gramsci, seeing the linguistic, cultural and political parallels between Sardinia and Scotland, in their relationship with Italy and Britain, respectively. For Henderson, who used the prize money of the Somerset Maugham Award (1949) he received for his Elegies for the Dead in Cyrenaica (topped up with a fortuitous win on the horses) to return to Italy and finish his translation of Gramsci’s Prison Letters, the Italian’s interest in culture as an agent, and particularly his interest in popular and folk culture, established an immediate affinity with Henderson’s thinking. It was one of the misfortunes of Henderson’s life that his translation had to wait for nearly thirty years before it was published; thus, his pioneer role in introducing Gramsci to the British left is often overlooked.

Gramsci helped Henderson to formulate his agenda which, after the War, was increasingly the promotion of the Scottish Folk Revival. For Gramsci as for Henderson, folk culture presented an alternative, a ‘subaltern’ view of society and history, alternative to the ‘official’, ‘bourgeois’ or ‘establishment’ version of the rulers. Folklore was to be understood as ‘a reflection of the conditions of [the] cultural life of the people,’ and thus representing ‘a conception of the world’ in opposition to ‘official’ conceptions of the world. Or, in Hamish Henderson’s words: ‘Folk art is an implicit — and in many aspects an explicit — challenge to the ruling class way of looking at the world.’ He saw folk art as the manifestation of a rebel ‘underground’.

Hamish fully agreed with Gramsci’s contention that folklore should be studied seriously. A passage from the Prison Notebooks could stand as a manifesto for Henderson and the School of Scottish Studies:

Folklore must not be considered an eccentricity, an oddity or a picturesque element, but as something which is very serious and is to be taken seriously. Only in this way will the teaching of folklore be more efficient and really bring about the birth of a new culture among the broad popular masses, so that the separation between modern culture and popular culture of folklore will disappear.

But he also had to grapple with Gramsci’s view of folklore as Janus-faced. Gramsci spoke of ‘various strata’ — beside the ‘often creative and progressive ones’ he also highlighted ‘the fossilized ones which reflect conditions of past life and are therefore conservative and reactionary’. Henderson called it Gramsci’s ‘unresolved but creative clash of contradictions’. While recognising these tensions, where he perhaps parted with Gramsci was when the latter claimed that folk culture had to be ‘overcome’ and that, in Corey Gibson’s words, ‘folklore can have no place in the development of a working-class hegemony and, therefore, no place in the revolutionary future as imagined by a Gramscian Marxism’.

For Henderson, as Gibson shows in his illuminating chapter on the folksong flytings of the early 1960s, folk art was a constant source available to, and necessary for, artists of all kinds to renew themselves, by going back to the great archaic stories of mankind. It is an ever-evolving ‘carrying stream’ which cannot be separated from ‘high’ culture, but facilitates a constant ‘cross-fertilisation’ between folk and literary cultures, ‘flexible enough to adapt to societal change’ Gibson reads the flytings between Henderson and Hugh MacDiarmid — a very public dispute carried out on the letters pages of the Scotsman about the disputed dichotomy of ‘high’ and ‘low’ art and the role of ‘individual’ and ‘collective’ in the creation of a progressive literature — as an enactment of Gramsci’s dialectics — between Henderson’s ‘humanism’ and MacDiarmid’s ‘intellectual elitism’.

That dialectic approach characterises the entire book, the first critical monograph on the work of Hamish Henderson and its role in the ‘cultural politics’ of Scotland in the second half of the twentieth century, based nearly entirely on Henderson’s writings, rather than the larger-than-life character of ‘Hamish Mòr’, the fondly remembered if sometimes slightly dishevelled ‘father of the Scottish Folk Revival’ and his legendary ‘impromptu colloquia’ in Sandy Bell’s Bar. (Robbie Fraser’s ‘Hamish — the Movie’ provides a vivid portrait of that side of the Bard). Corey Gibson shows him in all his dialectic tensions — of poet and songwriter, between oral and written traditions, as folklore scholar and folk revivalist, in the one role charting and analysing the folk revival while, in the other, simultaneously intervening in it, as a creative contributor and tireless promoter.

Thus, Gibson differs from Henderson’s biographer Timothy Neat in the assessment of the alleged fork in the road of Henderson’s career, when he, apparently, switched from poetry to folklore, coinciding with taking a role in the incipient School of Scottish Studies, founded in 1951 at the University of Edinburgh. By reading the Elegies and the (collected and modified) Ballads of World War II in tandem, he shows that they do differ in ‘form and technique’, but less so in ‘morality’ or ‘political philosophy’. He could have added that Henderson had already collected folk song and lore before the War, for example on Canna, under he auspices of Séamus Ennis and the Irish Folklore Commission (which would become an important partner of the fledgling School of Scottish Studies in the 1950s).

That Gibson introduces the Traveller community only in his final chapter, nearly as an afterthought, might come as a bit of a surprise. From Henderson’s early collecting days, Travellers played a huge part in the development of his ideas and practice, from their gatherings at his home place of Blairgowrie for the berry-picking season to his lifelong association with the Stewarts of Blair. And he often repeated that the one thing he regarded as his greatest achievement and that he wanted to be remembered for was his ‘discovery’ of Jeannie Robertson in 1953, and bringing her to the Third People’s Festival Ceilidh at Edinburgh Oddfellows’ Hall. The Travellers were, as tradition bearers and source singers, not only a vital link to the past, they also ignored boundaries, of both the territorial and the aesthetic kind, as nomads they ‘unsettle our notions of national tradition’. In their ‘muckle ballads’, Henderson found common motifs from across Europe, and in their repertoire (which had troubled previous collectors due to its ‘impurity’) a confirmation for Gramsci’s categorisation of folk songs as ‘written neither by the people nor for the people, but which the people adopt because they conform to their way of thinking and feeling.’

Hamish Henderson’s credo was derived from Heinrich Heine’s ‘Poetry becomes People’ — the perfect fusion between folk and art poetry. Gibson is right: with his song ‘The Freedom Come-all-Ye’, written for the Clydeside peace marchers in 1960, he produced the ‘most compelling example of a poetry that “becomes people”.’ So much so, that, despite Henderson’s own rejection of that idea, lots of people would want to see it used as the Scottish national anthem.

The artist’s role in society is a recurrent theme in Corey Gibson’s study, and the evolution of Henderson’s thinking and writing are presented as an ‘endless flyting’ (the title of Gibson’s award-winning PhD thesis on which the book is closely based), both in grappling with Gramsci’s observations on folk culture and, more immediately, with Hugh MacDiarmid, whose poetry he revered but whose elitism he rejected. For Henderson, the folk revival, and particularly the People’s Festival Ceilidhs, were ‘Gramsci in action’. As Corey Gibson puts it succinctly: Henderson ‘advocated Gramsci in practice and wrestled with Gramsci in theory.’

Gibson’s title, ‘The Voice of the People’, beautifully reflects the ambiguity at the heart of the discourse — is it the poet/intellectual à la MacDiarmid who speaks for the people, or is it the anonymous voice of the people: songs and stories adopted by the people because they express their world view. In that context it is understandable that Henderson was reluctant to commit his work to print — preferring to sing his songs in the pubs and folk clubs, in the hope that they might be adopted and become part of the ‘carrying stream’.

Henderson’s lifelong engagement with the travellers, his writing against South African apartheid, and his repeated references to the American folk revival and the Spanish Civil War as begetters of the Scottish Folk Revival, as well as his lifelong exchanges with Irish folk collectors and singers might have merited a bit more space in Gibson’s study. But the book is a bold statement. It is the benchmark further research on Hamish Henderson will be measured by. There is Henderson’s archive, now curated by the University of Edinburgh Library, with (among other items) Henderson’s notebooks and more than 10,000 letters. The acquisition of the archive in 2013 came too late for Gibson’s work on his thesis, but it is hoped that he and others will build on and further develop the concepts, ideas and theses put forward in this important and stimulating contribution to the debates anent the contemporary cultural history of Scotland.

The Voice of the People: Hamish Henderson and Scottish Cultural Politics by Corey Gibson is published by Edinburgh University Press, 2015.