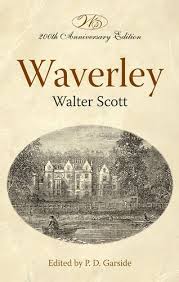 Edinburgh University Press’s handsome special edition of Scott’s first novel, Waverley – published to celebrate its bicentenary this year – is an intriguing mix of narrative immediacy and underlying editorial finesse. The text follows that established, with great editorial sophistication and authority, in Garside’s edition of Waverley in the Edinburgh Edition of the Waverley Novels (published in 2007), with a brief new introduction but without the extensive editorial apparatus (compositional and textual history, historical note, and explanatory notes) of the 2007 volume. The effect is to encourage readers new to Scott to plunge into Waverley as its first readers might, without preconception and without the palpable weight either of Scott’s sources and references or of Waverley‘s huge subsequent literary and cultural influence, worldwide. Necessarily, however, even in this form the volume has its paratexts – Garside’s new introduction (a masterly evocation of the excitement created by the novel and an insight into personal experience of changes in Scott’s reputation and cultural standing) and the jacket design with its ‘vintage illustration (engraving) of Sir Walter Scott’s manor’, which, for the present reader at least, intriguingly overlays the accounts of the fictitious demenses of Waverley (the estates of Waverley Honour and Tullyveolan) with the image of Scott’s own Abbotsford, a ‘Delilah of his imagination’ as he called it and still, it would appear, inseparable from his published works (though in 1814 it was still at a relatively early stage in its development, and very far from the form conjured up here).

Were readers able to come to the novel as if this were June 1814 – when, for a few months at least, Britain’s long war against Napoleonic France seemed to be at an end – rather than November 2014, what might they find? First and foremost, an involving tale of the adventures of a young English officer, Edward Waverley, heir to a great fortune and entangled in the Jacobite uprising of 1745 for reasons which are always more emotional than ideological. Scott describes his wavering from his commission in the army of the Hanoverian king, George II, to fight for the cause of Charles Edward Stuart; and ends, controversially, with Waverley’s (highly improbable) pardon, social reinstatement, and discordantly happy marriage amid the wreck of post-Culloden Scotland. Representing the perspective of the reader, travelling through unfamiliar parts of Scotland and clan culture, Waverley becomes educated in alternative ways of life. Brilliantly, and poignantly, readers find, by the end of the novel, when the Jacobite cause has failed, and Waverley’s friend the clan chief Fergus MacIvor is executed for high treason, that their imaginations (though not necessarily their political affiliations) have changed sides, too; that they feel for a way of life which they might otherwise have assumed alien and threatening. At the heart of Scott’s writing is a great emotional subtlety, including an understanding of the shifts of emotion in readers, for which he has been given insufficient credit, but which goes a long way towards explaining the appeal of his writings to diverse, often socially discordant, groups in his own time and afterwards.

Readers will find, also, a narrative remarkable for its wide range of cultural and historical reference, its social inclusiveness, and its technical innovation of combining a tale of national history with the bildungsroman. Reading it without editorial notes is a reminder of how deftly Scott includes historical information in his narrative, often with a show of apology (as in Chapter 5, where he talks of ‘plaguing’ readers ‘so long with old-fashioned politics, and Whig and Tory, and Hanoverians and Jacobites. The truth is, I cannot promise them that this story shall be intelligible, not to say probable, without it.’ p.26). They will find, from the start (the highly self-conscious first chapter), that they are listening to an adroit, ironic, knowing, and humorous storyteller. Scott combines a strong, and moving, sense of cultural loss with slyly funny moments, as when Waverley is momentarily confounded to hear Fergus McIvor’s most loyal clansman, Evan Dhu, say that he wishes the Englishman ‘saw but the chief himself with his tail on!’ (p.81), or when Waverley’s proposal to Rose Bradwardine, made in a snatched moment ‘while the rest of the company were looking at three twisted serpents, which formed a jet d’eau in the garden’, is implicitly contrasted with her father’s lengthy explanation of a dynastic alliance (p.338). The ‘discordantly happy’ resolution mentioned earlier, meanwhile, is a highly questioning construction. In fact Scott gives readers several intertwined, and thought-provokingly discordant, endings to his story: Fergus’s execution at Carlisle; the marriage of Waverley and Rose and the restoration-fantasy of Colonel Talbot’s repairs to Tullyveolan; and ‘A Postscript, which should have been a Preface’, with its analysis of the changes in Scotland since 1745.

There are many good reasons for reading, or re-reading, Waverley in its bicentenary year. In ways which would have fascinated Scott, 2014 is a year almost over-full of echoes and of revisitings, across the world, of old struggles and disputed identities. It is an historical accident that the bicentenary of Scott’s story of an Englishman in Scotland, and of a constitutional change that seemed for a few months in 1745 to be about to happen, should coincide with 2014’s Referendum on Scottish independence. But it is not an accident that the bicentenary year of Waverley should also mark the tercentenary of the Hanoverian accession, which galvanised the effort to restore the exiled Stuart line to the throne. Waverley sets up a designedly confusing historical time-line in being sub-titled ‘Or, ‘Tis Sixty Years Since’ (on which Peter Garside crystallises his extensive editorial research in his introduction to this anniversary volume). Scott, the master of complex histories, deflects attention from the fact that he published his first novel in a centenary year of special relevance to its subject-matter, and to the questions it poses about the interdependence of art and politics.

‘There is no knowing what tricks they have amongst them’ From Rebecca in Ivanhoe, to Elshie in The Black Dwarf and Fenella in Peveril of the Peak, the novels of Walter Scott display a frequent interest in presenting underrepresented groups and minorities in a sympathetic and dynamic way. These characters, while marginalised in traditional historical […]

‘The Wealth of the Nation: Scotland, Culture and Independence’ by Cairns Craig

In the year prior to the Scottish independence referendum, the Jimmy Reid Foundation instigated a project that became the Common Weal think tank. Its plan was to devise a manifesto for a fairer, more democratic, independent Scotland in the twenty-first century. Published in June 2014 under the editorship of Robin McAlpine, former researcher for the […]