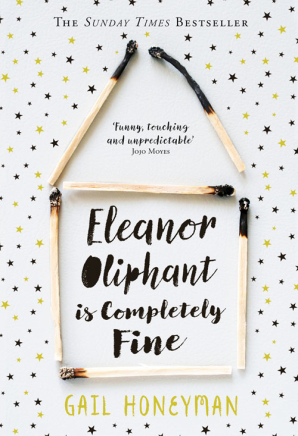 ‘Pain is easy; pain is something with which I am familiar’, the eponymous anti-hero of Gail Honeyman’s bestselling novel tells us. On Fridays, Eleanor Oliphant buys two bottles of vodka, takes a few big swigs and falls asleep on the sofa: ‘I drink the rest […] over the weekend, spread it throughout both days so that I’m neither drunk nor sober.’

Eleanor struggles to remember the last time she saw inside another person’s home, and loves her houseplant Polly most in the world. Honeyman expresses this isolation in terms of what’s missing: Eleanor loves the word niamniamensis because ‘it’s like kissing, the ‘m’s forcing your lips together, rolling over the consonants, your tongue poking into ‘n’s and over the ‘s’.’

The routine, the boring office job, her empty flat, all suggest a soporific silence; we’re surprised when the phone rings and Eleanor’s mother zings down the line: ‘She laughed, a cocktail party tinkle – the light, bright sound of a Noel Coward character enjoying an amusing exchange of bon mots on a wisteria-clad terrace.’ But Mummy isn’t phoning from a soirée. She turns from the mouthpiece to growl at someone in the background: ‘Will ah fuck, Jodi – ahm talking tae ma lassie here, and ahm no gonnae curtail ma conversation for a wee skank like you’. There is a pause and she resumes, ‘Sorry about that, darling’; Eleanor’s mother likes to adopt ‘the accent and argot’ of places she’s been detained. The nature of the detention isn’t revealed but we know she’s deprived of her epicurean tastes for honey-glazed poussin and celeriac fondants. We also know that she is clever, manipulative and a bully. As her voice becomes sly and quiet, Eleanor feels sweat on the back of her neck:

You grew inside me, your teeth and your tongue and your cervix are all made from my cells, my genes. Who knows what little surprises I left growing inside there for you, which codes I set running. Breast cancer? Alzheimer’s?

Like other first-person narratives with neurotic or lonely voices (Spill Simmer Falter Wither and Pond, both 2015, come to mind), we get the feeling that Eleanor is telling her story very much to herself. This is reinforced by her posing of questions that go unanswered; musing on the chance of her dying alone and undiscovered in her flat, she asks: ‘Would the officers break down the front door? Find me, covering their faces, gagging at the smell?’ She says of a wedding: ‘I sat on my own and no one asked me to dance and I was absolutely fine with that.’ But the emphasis betrays a false conviction.

Eleanor pontificates on a multitude of trivialities including cafeteria cutlery, wedding lists, and the brewing of first flush Darjeeling. Everyone has foibles, but for lonely people, these mutate into something more precious. She fills the emotional hole with books, reading whatever she comes across on the shelves of charity shops. This, together with an absence of close human contact, means her vocabulary is formal, bulging with anachronisms; she buys ‘comestibles’ and ‘divests’ herself of her clothes.

Eleanor is full of contradictions. She likes sausage rolls from Greggs, and Suetonius’s The Twelve Caesars. She has mittens on string and shoes with Velcro fastenings, but finds trendy Raymond’s duffle coat childish. Her Power Rangers clock, a fondness for Alphabetti Spaghetti, and her frog-shaped pouffe might cause us to sneer were it not that they counterpoise our realization that Eleanor is a product of living the same empty existence for more than a decade.

Seen through Eleanor’s eyes, society becomes a strange place. She knows nothing of popular culture: she mistakes Zumba for a person, and Arnold Bennett for an omelette chef. While amusing, perhaps too much of the humour relies on this de-familiarization; towards the end it feels repetitive.

Occasionally we glimpse how troubled Eleanor is. It’s uncomfortable, only made more so by the knowledge we’d been laughing a moment before:

Eyelids are really just flesh curtains. Your eyes are always ‘on’, always looking; when you close them, you’re watching the thin, veined skin of your inner eyelid rather than staring out at the world.

Then: ‘But last night, [I] found the love of my life.’ Under the pernicious influence of Mummy, Eleanor’s burgeoning obsession with an amateur musician leads her to embark on a programme of self-improvement. For a funny book it’s surprisingly and succinctly damning of modern life. Eleanor’s social criticism extends to loneliness (‘the new cancer’, a word people fear hearing aloud in case the condition is catching), reality TV, and feminine ideals:

I’d made my legs black, and my hair blonde. I’d lengthened and darkened my eyelashes, dusted a flush of pink onto my cheeks and painted my lips a shade of dark red which was rarely found in nature. I should, by rights, look less like a human woman than I’d ever done, and yet it seemed that this was the most acceptable, the most appropriate appearance that I’d ever made before the world.

The crush ends badly, and gradually Mummy’s mischief-making fades; when her weekly phone calls cease altogether two-thirds through the narrative, it feels frustrating: her mother was darkly comic and her periodic presence affected an engaging change in tone. From here, the story focuses on Eleanor’s salvation. Counselling sessions are sensitively portrayed: ‘The sky didn’t fall in, Mummy wasn’t summoned like a demon by the mere mention of her name.’ Perhaps the plot’s fatal flaw, the hamartia as Eleanor would say, is that anyone this broken is unlikely to become whole again, and the dipsomania and obsessiveness seem too easily resolved. But if we lose something of the truth in this, it’s because the novel is one of hope and transformation.

As an exploration into the effects of acute solitude, we find Eleanor’s social interactions hampered by emotional agnosia. The book’s epigraph is a quote from Olivia Lang’s non-fiction work The Lonely City, about lonely people being ‘less adept […] at navigating social currents’. With recent Guardian headlines like ‘Loneliness is harming our society’ and ‘Loneliness as bad for health as long-term illness’, Honeyman’s debut feels timely and relevant.

Eleanor Oliphant is Completely Fine by Gail Honeyman is published by Harper Collins, 2017.