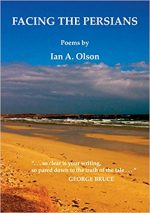 This first collection of poems by ‘long-retired doctor’ Ian Olson is the fruit of some sixty or more years of writing and as such, it really is a gallimaufry of styles, moods and subjects. The language accordingly also ranges from the formal and rhyming, to pawky, free and colloquial. It begins far back in classical antiquity with the invasion of Ancient Greece by the Persians and winds its way through traditional and bardic Scottish / Gaelic song, to the last hours of the Paris Commune and the aftermath of the First World War, culminating in a selection of funny nonsense and doggerel verses written by the poet for his grandchildren. On the surface, the narrative arc these poems paint seems a rather bathetic one – to begin with the cool, ataraxic tones of ‘Thermopylae’:

And greater honour is due to them
When they know (as many do)
That the traitor shows up eventually
In the end the Persians will break through.

And end with poems of sheer silliness, like the misreading of a word written on a calendar in ‘A Slight Misunderstanding’:

If you bob behind the cherry tree and sit down out of sight
You may see an apparition that affords you quite a fright
For she’s carrying a cutlass and a burnished-bright spy-glass
When Granny goes on Thursdays to her Pirates Class.

But to read the collection in this way would be to do it a disservice. Demonstrating a poetic range seems to have become less fashionable, and more value and emphasis has been recently placed on poets having a distinctive, consistent voice. However, of consistency, perhaps Olson shares Hugh MacDiarmid’s view that only shallow minds seek and treasure it. Besides this, the structure of the collection does work, and works well, if we recognise in the early poems a calm acceptance of the inevitable – that the Persians will break through and we will all die and the key is to live meaningfully as a result. This is hit home in the poem ‘Evening Stroll’ – a celebratory elegy for Louis Charles Delescluze, revolutionary leader of the Paris Commune – walking to his death with dignity in a hail of chasse-pot fire. Some of the most moving poems are for a relative – Alexander Cormack Olson – who died serving during the First World War. There is a sense of the senseless loss of life, but also a resolution to live in and enjoy the present:

Many of Olson’s poems can be very pithy and economical, while also emotionally freighted. In the extract above we see in three lines that the speaker has missed the silence for a very good reason, for the family still continues to thrive, and our duty should always be to the living. In ‘Yper’ Olson echoes Scottish war poet Joseph Lee’s poem ‘The Bullet’ when he writes that ‘more than soldiers lost their lives’ (‘Perhaps I killed a mother / When I killed a mother’s son’). As is the case with a number of poems in Olson’s collection, the poem is sometimes dependent on the notes provided, and here we learn that the war dead were not allowed to be repatriated for burial and instead ‘After the war, families had to pay commercial tour operators to visit them’. Such notes as these, and a number of the poems themselves impress on us Olson’s social consciousness, awareness and compassion as a poet. There is also an underlying sense of Scottish patriotism of the critical, self-reflective MacDiarmid kind, in poems such as ‘At the Tomb of Robert the Bruce, Dunfermline Abbey’:

To return to Olson’s early poems, of Ancient Greece, we see they have been praised in letters by the likes of George Bruce and David Daiches for injecting age-old (perhaps even a little threadbare) tales with a modern sensibility. More than this, however, they seem symbolic of something much more intimately connected to the poet in old age, still writing and fighting for a cause. They all without exception seem to identify with the aged warriors of Sparta:

Quietly we wait below the cliffs,
Bronze shields burning fiercely in our arms
Spears already heavy to the wrist
(Arthritis seized old fractures long ago)

Wondering that they want us to buy time
(We’ve spent all ours, given it all away).

I’m hoping Leonidas knows what he’s up to
That we can still do what they have asked of us.
(from ‘Facing the Persians’)

Although it may appear these poems are Olson’s proudest, as we are shown the praise they have garnered and they are given prominent placing in the opening pages, I’d argue that they are the oldest, and are put out there like the aged Spartans as a defence against the more vulnerable and personal core within. I was most struck by poems such as ‘Strathconon’ which engage with Olson’s continued interest in Gaelic song and poetry, shot through with echoes of Sorley MacLean’s work, as well as memories from the Olson’s own life:

When you took the autumn to London
And left me to burrow into winter
I said they could pack up Strathconon
Box up the birch and the larch
Return the swans on Achonachie
And while they were about it
They could empty the Curin dam.

I also admire Olson’s sensitivity as a poet who is attuned to the power of things that are not said, the imaginative potential of gaps in poetry, such as the reason for a boast which is left out in ‘In Praise of Macleod’, or why Sappho sleeps alone in ‘From Sappho’. Through all of these poems there is a continued lightness of touch and alertness of the mind to the presence of the past, and the past in the present. The overwhelming message of the poems, however, is carpe diem, in face of our shared fate:

A cuckoo cries out to me
From his bush, with a grey hood.
Oh, dear God, how happy I am,
Writing here, under the great wood.
(from ‘The Scribe Under the Trees’)