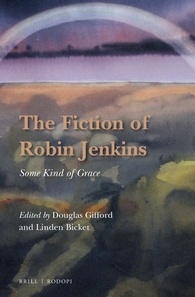 Each of this volume’s essays is prefaced by a list of its keywords, and this is the rather expressive first instance. By my count, the most recurrent keywords across the fourteen essays are ‘morality’, ‘religion’, and ‘Calvinism’; and, just to confirm one’s sense of how representative a modern Scottish novelist Robin Jenkins might really be, contributors also prime us for his thoughts on ‘community’, ‘death’, and ‘football’. Notwithstanding the qualified uplift of the subtitle (‘some kind of grace’), what the volume really emphasizes is the more uncompromising ethical side of Jenkins’ fiction.

The cost of this emphasis, it should probably be said upfront, is that Jenkins’ moral seriousness occasionally gets used a bit unreflectively, as if it guarantees in some completely self-evident way his importance and interest as a writer. At times, too, the patient descriptions of his characters’ moral conflicts would really have benefited from making more explicit in literary-historical terms why other critics of post-war fiction should find these moral conflicts especially significant or telling. That said, the volume as a whole presents a thoroughly coherent and persuasive account of Jenkins’ recurrent concerns: his focus on problems of judgement and responsibility, on the perpetual threat or consolations of bad faith, and on the properly lacerating effects of the individual conscience in both its private and social workings.

Given how much Jenkins published in the course of his half-century of writing – twenty-nine novels and two story collections – the volume’s coverage is also impressive. The fourteen main essays address individual novels or phases from across Jenkins’ career, and the career as a whole is introduced by a substantial and useful introduction by Douglas Gifford and the late Gavin Wallace. The volume gives a strong sense of the shape of Jenkins’ oeuvre, from the novels of the 1950s, here effectively evaluated (and not merely surveyed) by Isobel Murray, to the posthumously published The Pearl Fishers (2007), which Linden Bicket reads alongside A Would-Be Saint (1978) as the work in which Walter Scott’s influence is most powerfully felt. Aside from its chronological coverage, the volume also attends to Jenkins’ geographical range: although mainly a novelist of the West of Scotland, both urban and rural, he also worked in and wrote about Afghanistan and what is now Malaysia. Glenda Norquay offers a thoughtful and measured account of his treatment of cultural difference and asymmetries of power in postcolonial as well as Scottish contexts, as does Alan Riach’s chapter on Jenkins’ short story collections, the expatriated A Far Cry from Bowmore (1973) and the Scottish-set Lunderston Tales (1996).

Strong individual chapters are devoted to what are probably Jenkins’ most-read novels. Gerard Carruthers’s essay on The Cone Gatherers (1955), Douglas Gifford’s on The Changeling (1958), and Michael Lamont and Douglas Gifford’s on Fergus Lamont (1979) all demonstrate the complexities of these novels at the level of narrative technique; and their analyses certainly confirm that these novels warrant the extra space. Still, you do wonder what ‘most-read’ amounts to in this context, given how little recognition Jenkins’ name elicits among non-academic readers or even among academic critics outwith Scottish literary studies. The second of Ingibjörg Ágústdóttir’s contributions to the volume notes that ‘literary achievement’ is among the concerns of Jenkins’ fiction after his autobiographical and self-reflexive late turn (p.238), but it would be helpful to know something of where, reputationally speaking, Jenkins stands now and why.

Where the post-war novel is concerned, these questions of critical esteem obviously resonate beyond Scottish writing. It becomes ever clearer that the initial receptions of Jenkins’ generation of novelists have proved a startlingly unreliable guide to the durability of their reputations. A paradigmatic English counterpart would be Jenkins’ contemporary Angus Wilson – feted on his first appearance on the scene in the 1950s, knighted for services to literature, and now largely forgotten. Even post-war reputations that once felt altogether secure have come to look unexpectedly fragile in the twenty-first century: Iris Murdoch, say, or William Golding, or Anthony Burgess, just to stay with Jenkins’ and Wilson’s generation of 1950s moralists. Cairns Craig’s sharply observed essay here on the traps presented by Jenkins’ slippery narrative modes argues persuasively that it would be a mistake to read Jenkins alongside the early post-war realists, but many of these novelists are themselves not much more than historical footnotes now. I wonder if the unspoken question of diminished reputations explains why Muriel Spark is so important a reference point in Margery Palmer McCulloch’s discussion of irony and equivocation in Jenkins’ fiction – Spark, at least, is solidly canonical for the time being. This is not to suggest that the comparison isn’t a productive one in its own right; on the contrary. Another simultaneously tragic and hilarious novel about fantastical self-fashioning in interwar Scotland, Fergus Lamont probably has the strongest claim to be Jenkins’ Prime of Miss Jean Brodie, the novel on which his reputation is likeliest to stand. It is surely the most historically and formally ambitious of his novels, as well as the most politically penetrating in its treatment of the destructive psychic effects of class difference.

Understandably – and, indeed, often clarifyingly – the volume’s points of reference for Jenkins are almost always other Scottish writers: Jenkins’ ambivalent echoes of the interwar Scottish Renaissance writers, with their spiritualization of women and Scottish landscape; his possible impact on Glasgow novelists of subsequent generations; the shades of James Hogg and John Galt as well as Scott. Still, recent work on mid-century culture brings to mind additional contexts for some of the features that contributors find in Jenkins’ fiction when they write of, for example, the tensions between his social realism and his reaching for moral transcendence, between his atheism and his almost metaphysical sense of evil, and between his progressive social politics and his alertness to how people deceive themselves about even their highest-seeming motives. In her excellent recent book Bleak Liberalism (2016), American critic Amanda Anderson turns to the intellectual culture of the middle of the twentieth century to show how, for all their hopes about social progress, liberals have always ‘engaged sober and even stark views of historical development, political dynamics, and human and social psychology.’1 Mark Greif is also thinking about mid-century transatlantic thought in The Age of the Crisis of Man (2015) when he describes writers and intellectuals struggling in the Stunde Null of the late 1940s to conceive anew of the so-called human condition in an era when millions of real human beings had been ‘alienated and eradicated, altered and undone’ in extermination camps and vaporized cities: ‘A factory for the disassembly of men, not long ago just a metaphorical conceit, had been built. It had been warned of, but no one could have known it would happen so practically. A force to destroy the whole physical world, something easy enough to dream up in the “man masters nature, then destroys himself” visions, had genuinely been found’.2

Finally, then, while I could not agree more with Bernard Sellin’s argument in this volume that Jenkins never shook off the influence of the Calvinism he otherwise deplored, there may be a deeply historical as well as a national dimension to Jenkins’ unrelenting concern with sceptical self-scrutiny and the fundamentals of moral action. By this, I mean that if some of what we all see in Jenkins’ fiction (for instance: ‘moral quest – conscience – morality – human fallibility – self-knowledge’ [p.143]) clearly bears the marks, some would say the scars, of Scotland’s almost uniquely anti-humanist Protestant traditions, it may reflect also a less nationally contained set of post-war, post-atomic, and post-Holocaust apprehensions about human possibilities in ‘the age of the crisis of man’.

The Fiction of Robin Jenkins: Some Kind of Grace edited by Douglas Gifford and Linden Bicket is published by Brill as part of the SCROLL series, 2017.