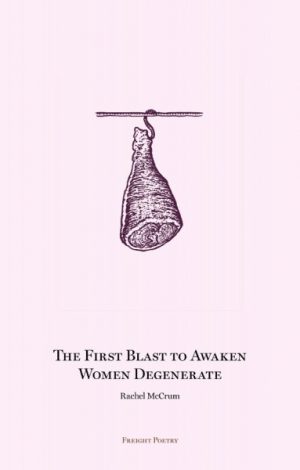 The First Blast to Awaken Women Degenerate is the debut collection for the inaugural BBC Radio Scotland Poet in Residence, Rachel McCrum. Two pamphlets preceded: The Glassblower Dances (winner of the 2012 Callum McDonald Memorial Award) and Do Not Alight Here Again, both published by Stewed Rhubarb Press.

Although now living in Montreal, McCrum became well known on the spoken word scene in Scotland between 2010 and 2016, most particularly as the Broad of Edinburgh-based Rally & Broad. Her poetry has also been travelled via performances across the UK and in places as diverse as Greece, Haiti and South Africa. The performance poetry arena can be a difficult one; it certainly doesn’t work for all poems or for all poets. So what is extraordinary about this collection is that the poems, while firmly anchored to the page by features of formatting, including switches between Roman, bold and italic faces, also find a voice that sings, rages, roars as you read. These poems make their own stage.

The voice is an extraordinary one: strident, angry, full of blood and air, but then tender, lyrical, quiet. And one of the strongest themes too is a plea for voices, and in particular for women’s voices, to be expressed and heard. There is anger at the silencing, the repression of women across history, and the imposition of sexual stereotyping and even violence against women that have taken place in more recent times.

The title poem is a response to John Knox’s 1558 The First Blast of the Trumpet Against the Monstruous Regiment of Women: ‘Give me ruling women / and yelling women / Give me unsilent / unwatchful women’, says McCrum. But other poems take this theme and give it such gentleness too. In ‘Broad’, her mother tells her the importance of getting the potatoes on the table for her brothers before she writes her application for university, her mother who ‘was a farmer’s daughter with a voice / that stretched across three fields’. She was the first in the family to live by words rather than by physical labour, but she ‘grew, along the way, / uncharacteristically quiet. / It can be hard / to explain the weight/ of paper’. I found the lyricism of this heart-stopping.

There’s feminism here, but it’s so much more than that. There’s fierceness, sure, in ‘I am Gigi Hadid’s left elbow’, for example. And a punching-the-air, ballsy pride in ‘My underwear was made of iron’. But there are poems that use longer narrative and astonishing images to speak of a whole world of women’s lives, like ‘I lost my shoes on Rachel Street’, which echoes with my personal favourite, ‘Across the town the ancient dancer’: ‘Across town, she straightens / in her chair, puts her spine to the mountains, / drapes over the forests, the valley’. ‘Take Me to the Market, Mother Dear (a strategy of dissonance)’ brings together disparate narratives that jostle on the page but make a whole polemic, using surprising twists and turns on ordinary words that we think we know. These are poems that put women in the world and the world in women.

There are many moments of humour and irony too. I loved the tongue-in-cheek wisdom of the series ‘Problems to Sharpen the Young’ (i), (ii) and (iii) that are spaced through the first part of the collection. Then, there are the short, sharp poems like ‘Football Boots’: ‘a tilting clatter of pre-teen boys / football boots clicking like high heels / engrossed in gossip’. Look at the image there, and listen to the rhythm, the clever alliteration. And what about joy? ‘Joy is a fat toddler with a permanently dirty face.’ And then there’s ‘The five o’clock poem’, which has been ‘scooped and hacked’, everything denied in the modern way, so that there is nothing left.

Other themes that emerge strongly in this wide-ranging collection are family, place, art, and the environment. I particularly loved ‘Luss’: ‘The name hooked us, / so irresistibly strung between lust / and loss. Kiss, too, if we wanted’. The romance of going away will resonate for many, as it did for me, the way we make ourselves up when we go away: ‘We don’t mind where we go / as long / as it is away’ – but then, self and memory are carried with us, so ‘What use is away?’ But ‘Luss’ is still a beautiful place to have been.

Family, relationship, the nature of love and the sharing of lives weaves its way through the collection, some poems dedicated to the theme – ‘I go sailing’, for example, a wonderful focus on the father-daughter relationship — while others, like ‘Runaways’, take a more oblique approach, then demanding several re-reads! In ‘Time Difference’, there’s a relationship in which, after years of dreaming and knowing and not knowing, ‘I no longer miss myself’. It is appropriate that this is the final line of the collection, the end of a poem but also the end of a life journey in poetry. I look forward to more from Rachel McCrum.

The First Blast to Awaken Women Degenerate by Rachel McCrum is published by Freight Books, 2017.