“You look as serious as a ghost.”

Muriel Spark made it clear that she thought of herself as a poet, though that still might be news to anyone who has not read her essays or letters.  In a 2004 Guardian review of a new edition of her poetry, Ian Sansom singles out ‘Fruitless Fable’ as a poem representative of those in her collection that have an ‘underlying sense of menace’.   I wish to acknowledge that sense here as an outstanding quality of Spark’s writing in any genre, and then to examine how Spark uses the figure of the machine, a central figure in ‘Fruitless Fable’, as a metaphor for writing in her presentation of the macabre. Poetry is the medium of presentation because of the conceptual correlation between its mechanics and machinic precision Looked at in this way, poetry seems counter-intuitively unsentimental; a lack of sentimentality is another oft-cited quality of Spark’s writing, in line with the sense of menace. Spark employed many poetic forms; she was particularly fond of the border ballad and ‘narrative art’, the latter on display in ‘Fruitless Fable’. But as she continues to remind  readers, her narrative art was imbued with what she called a ‘poetic vision’ — ‘being aware of the value of words […] in a very quick flash as one is going along’.

‘Fruitless Fable’ is an early poem (1948). In a letter to editor Howard Sergeant in 1951, Spark listed this poem among several that she identified as ‘mainly exercises in form’: ‘I am trying to work toward a lucid compactness before spreading out again.’1 These adjectives — ‘compact’, ‘spread-out’ — might be said to qualify the formal difference between poetry and prose, and of the two, one might more readily attribute compression to Spark’s writing in any genre. Yet, as she often suggested, poetry was the rehearsal arena for her poetics.

‘Fruitless Fable’ exemplifies Spark’s fixation on ghosted machines, which appear throughout her oeuvre, in both fiction and poetry: e.g., typewriters (The Comforters), t 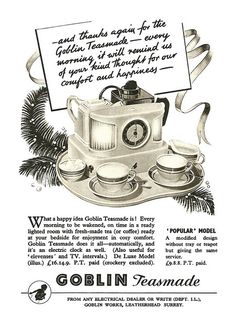 ape recorders (The Abbess of Crewe) telephones (Memento Mori), etc. Concerns about the threat of the machine/robot were certainly rife in the mid-century, and still are, though now the anxiety is lodged more firmly in the fear of obsolescence. The creepiness that attended the novel idea of the animated machine is very much alive in this poem, which features a Goblin Teasmade, so aptly named; the trademark GT was a remarkable invention for the 1950s, one that contained an alarm clock and a tea-machine. Mr. Coffee was a later incarnation of this machine in the United States, where you might set coffee making for a desirable morning time. Both convey the idea of a dependable, mechanical servant (‘made’ homonymic with ‘maid’), but there is something more — the Teasmade is pictured in ads standing on the nightstand, next to the bed, as a kind of eerie companion. Spark’s poem picks up on both these ideas.

The figure of the machine has been used to articulate a modernist sense of economy, one that marks Spark’s work overall. The machine, then, becomes a metonymy for writing itself. As so often is the case in Spark’s writing in any genre, there are parallel narratives: a human story and the story about writing, or ‘being aware of the value of art’, as she puts it. Of course, machines are precisely thought to be inhuman, or sinisterly replacing humans, which then also weds the sense of a menacing lack of affect to the imagist principle of ‘no ideas but in things’; also, in the nature of the machine, to the ‘well-wrought’.  William Carlos Williams addresses these ideas of economy and sentiment in poetry in the introduction to The Wedge (1944): ‘There is no poetry of distinction without formal invention, for it is in the intimate form that works of art achieve their exact meaning, in which they most resemble the machine, to give language its highest dignity, its illumination in the environment to which it is native. Such war, as the arts live and breathe by, is continuous.’ Williams ends his introduction thus, having begun with the line ‘The war is the first and only thing in the world today.’ Written in 1944, such a statement seems redundant, in both the American and British sense, the first being repetitious and therefore gratuitous — it goes without saying again; the British meaning refers to the obsolete, and in that sense gratuitous matter. And it is precisely the phenomenon of redundancy that Williams wishes to counter with the idea of a parallel ongoing conflict about art, where the stakes are just as high. Being unsentimental, Spark-like, Williams avers the potentially controversial connection between art and war.2

In the case of Spark’s ‘Fruitless Fable’, the formal invention is the ‘morning tea-machine’ authorized or dignified by its source — comically, a reputable department store, now defunct (named in the poem — Barkers’ of Kensington, whose expansion was hindered by WWII). There is a sense of cataclysm ‘It is the end of the world’ — the Goblin Teasmade is after all also an alarm clock — when the machine turns on the human who has ostensibly perfected it to serve him. Chiddicott’s ambition is ironically his undoing. That is, he has, in Williams’ terms, undone the invention, taken it out of its ‘natural environment’. The machine mocks, in the sense of imitates, his imperfect creator, even finding a voice, where once he was ‘dumb’. Speech in particular raises the spectre of the uncanny, prompting one to ask where does sound reside in the machine, reflected in a similar question about the human voice.3 This question corresponds to the very same query about narrative or poetic voice.  Mr. Chiddicott is alarmed by the tea-machine’s deviant direction: ‘Mr. Chiddicott, the time has come/For you to make the tea instead./Nip out and let me into bed.’

The parallel narrative in the poem to the one about the poem itself is that of the ‘bachelor’s’ relationship with the Teasmade machine, which he in turn comes to serve.  But the machine and the bachelor are parallel, too, or mirrored in one another; they do not exactly exchange places but they are essentially conjoined. They are both ‘maid’ and even ‘maiden’. Mr Chiddciott is referred to as ‘being by profession something mechanic’ and the tea-machine is not in perfect control. Williams’ idea that it is in the ‘intimate form that exact meaning is achieved’ takes on quite another meaning here where the morning machine is indeed suggestively an intimate. The service this machine performs extends to Mr. Chiddicott’s bed and how else to explain the penultimate line except in such intimate terms — ‘(From the windows across the street, I mean)’ — whose expression of voyeurism is performed grammatically through parentheses.4  The line also reveals another intimate.

The mystery, beyond the fantastical narrative overall, is in the admission of blame, with which Mr Chiddicott’s story resolves:

Mr Chiddicott murmured as he curled
Up, ‘It is the end of the world.’
But it wasn’t, for Mr. Chiddicott came
To, and finally admitted blame,
And every morning now can be seen
(From the windows across the street, I mean)
Serving tea to his perfected tea-machine.

The animation of the machine, which is represented, paradoxically, by a breakdown of sorts, seems to mock human authority and primacy, ad absurdum, and such mockery is one of Spark’s signature moves. The menacing sense comes through, too, in this lack of narrative control over and by the characters, signaling an impotent author but also a potently mysterious creator — the ghost in the machine. Prosaically, it seems Mr. Chiddicott is to blame for mistreating his machine, subjecting it to the indignity of a servitude for which it was not made. One may read in this a reference to language, in Williams’ sense of the indignity of the badly wrought, lacking aesthetic integrity.  The act of perfecting the machine evokes a Shelleyesque critique of human ‘creep’, as it were, in the hubris of assuming the role of the deity to create life; a conundrum for the writer of such an apprehension. Both Shelley and the conundrum were topics with which Spark was intimately involved.5 Mr. Chiddicott’s ‘bliss’ and his ‘success’ are disturbed by the backlash against his action.  The ‘successful’ Mr. Chiddicott is curiously metaphorized as ‘a cabbage rose’, something natural, but cultivated, blooming only once a season—and so, manufactured and dependable. As a rose by another name, less delicate-sounding and therefore -seeming, Mr. Chiddicott’s lack of gentility is blameworthy.

The metonymy of writing in the ghosted machine may be gleaned further from the rhyme scheme of the poem. In the first stanza, the off rhyme comes with ‘something mechanic’ describing the robotic human, and perfect it’, the pronoun here referring to the imperfect machine (lines 9,10). The final stanza has an odd number of lines (15). The final word ‘tea-machine’ now stands alone, taking over the blissful role of his maker as  ‘Mellow, unmated and serene’ (line 15); the parenthetical qualification equating to the voyeuristic act ends with the words, ‘I mean,’ itself a rhetorical qualification that rhymes with ‘seen’ in the previous line. Though the tea-machine resides outside the rhyming couplet formation in the outstanding last line, it nevertheless attaches to the poem through its rhyming relation to the last couplet, just as the tea-machine’s role change is assumed through this same rhyme (‘serene’). One must also observe that the voyeuristic penultimate line (‘From the windows across the street, I mean’) has insinuated a voyeur with the pronoun ‘I’, who seems to reveal herself as the narrator, with a requisite sense of menace and rhetorical playfulness: a ‘scrupulous meanness’.6 I believe that Joyce’s signature phrase for his own stylistic invention in Dubliners is particularly relevant to Spark’s style, punning on the idea of meanness as both economical and harsh or malicious. I will only mention here the clear resemblance between Mr. Chiddicott and Mr. Duffy in ‘A Painful Case’, the solitary bachelor whose sense of clinical perfection ruins another life.

Spark is not strictly a formalist, a modernist, or a postmodernist, but her focus on what constitutes the writing machine and its perfections/imperfections is rehearsed here and elsewhere in her oeuvre through her rhetorical machinations. The menace which resides in the overriding sense of a loss of control is pervasive and the cost is steep, an unavoidable pun in this fable about a tea machine. But what is exactly ‘fruitless’, the other pun in this tale about an unyielding bachelor? Does Spark pull her punch with this title, as she often does, by ridiculing the would-be simplicity and moral yield of the fable?  Or is it the fruitlessness of any attempt to constrict her to a particular form?

Mr. Chiddicott, being a bachelor,
Purchased from a reputable department store
(Barkers’) a morning tea-machine
At the price of fifteen pounds fifteen.
Easy to work, all plugged and wired.
Each night, he set the time required,
And every morning when he heard
The bell, he found his tea prepared.
But being by profession something mechanic
Mr. Chiddicott began to perfect it,
So that long before when it woke him up
It actually handed him the cup.

Years pass. Mr Chiddicott grows
Successful as a cabbage rose,
Mellow, unmated, and serene,
Served by the morning tea-machine.
Alas, the transience of bliss—
There came a sudden end to his.

One morning as it rang the bell,
The tea-machine said, ‘What the hell,
I’ve stood this treatment long and dumb;
Mr. Chiddicott, the time has come
For you to make the tea instead.
Nip out and let me into bed.’

And when our friend demurred, alack
The tea-machine gave him a dreadful crack.
Mr Chiddicott murmured as he curled
Up, ‘It is the end of the world.’
But it wasn’t, for Mr. Chiddicott came
To, and finally admitted blame,
And every morning now can be seen
(From the windows across the street, I mean)
Serving tea to his perfected tea-machine.